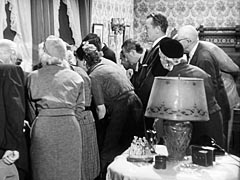 He brings the trial right to the room where Kane was murdered to reenact the fatal night. Perry rigs a setup with an alarm clock and a doorbell to prove not all buzzers sound the same.

This is the episode where Paul is all eyes when he’s asked to investigate a dance troupe backstage.

CARS: 1958 Pontiac Bonneville convertible, white, top down (Carl Reynolds); 1958 Cadillac Fleetwood 75, black; 1958 Cadillac convertible, black, top down (Mason); 1958 Pontiac Star Chief Catalina 4Door Hardtop, white; 1958 Chevrolet Delray 4dr sedan, black (Police); Cameo: 1955 Chevrolet Nomad. From The Cars by Greg Cockerill.
+ For what it's worth, as Rhoda pulls in to the gas station with the flat tire, you can see "StarChief" on the lower front of the right fender. OLEF641 11/27/2020

Anomaly: This is the first of six appearances that Casey Adams will make on Perry Mason. For the first three appearances he uses the name Casey Adams, and the last three he uses his real name Max Showalter. For some reason, after 25 years in show business in the mid-60s Casey Adams resumed using his real name of Max Showalter. Real fans of TV trivia will remember that Casey Adams was the original Ward Cleaver. Submitted by PaulDrake33, 7/3/2008.
+ There’s more info and some links to even more about Casey/Max on the Credits Anomalies page. Added by daveb.

In the opening scene, Carl Reynolds is backing his 1958 Pontiac Bonneville convertible down his driveway. You can clearly see the tag on the rear of the vehicle, DHR 786. This same tag will be on the front of Hans Breel’s sport car in Episode 51, TCOT Shattered Dream. Submitted by PaulDrake 33, 7/15/2008.
+ Revealing Mistake: Note that Casey Adams never looks to his right when backing the car into the street the way most folks would when entering a two-way street, evidently because he is primarily concerned with not hitting the camera. Submitted by Alan Smithee, 5-6-2014.

Character Names: Rhoda Reynolds addresses Dr. Harris as “Michael” during the show, although his first name does not appear in the credits. Submitted by gracep, 8/3/2010
+ A sign of the times: Dr. Harris smokes a cigarette--in the hospital. Submitted by 65tosspowertrap, 8 May 2014.

Uncredited Actors: Don Anderson appears as a spectator in the last row on Mason’s side of the courtroom. Submitted by FredK 16 Nov 2010.

Location: About 5:40 into the episode there is a quick shot of Beverly Hills Doctor’s Hospital, which the UCSB list of Historic Hospitals lists at 10390 Santa Monica Blvd. It is no longer there. Currently Alcon Entertainment is on the site. Submitted by Eric Cooper, 6 December 2010.

Goofs? At the start of the episode we see three successive shots of Rhoda as she walks out of her house. In the first and third shots she is smiling, in the second she has a serious look on her face, almost frowning. When Perry puts the door buzzers on the table, they fall in a particular pattern. This is followed by a close up which matches the previous shot, but in the following long shot they are arranged on the table differently without Mason touching them. Submitted by Wiseguy70005, 8/01/12.
+ When Perry goes in to change the bells for buzzers, there is a closeup of the door of apartment 1, implying that he's going in there first. But we see him open the door to apartment 2, then lay out all four new buzzers on the table prior to installing the first buzzer. Submitted by alan_sings 12/5/2014

Syndicated cuts: The opening shot of a dairy truck, a mailman and Carl driving; scene with Philip and Carl discussing Rhoda and money; Mason meeting Mrs. Crandall at Kane's; Burger asking for the death penalty and his examination of Tragg; Philip interrupting at Carl's divorce deposition and Mason admonishing him.
Additional Hallmark cuts: Dr. Harris writing Perry's name and address, handing it to Rhoda and Rhoda reading it aloud; Rhoda asking Perry about a person who's disappeared for seven years being legally dead, Mason replying it doesn't apply, Rhoda asking what her "friend" should do, Mason replying divorce the first husband and remarry the second; scene with Philip and Carl after Tragg leaves; Mason testing the first bell in the apartment and beginning to unscrew it; Burger asking Mrs. Crandall if the voices she heard were quarreling, Mason objecting as being leading and suggestive, Burger rephrasing the question and the judge giving Burger a stern lecture on leading questions; Mason telling Mrs. Crandall he doesn't want to confuse her, but if there was a buzzer there she couldn't have heard a bell which she thought had a whirring sound; Mason telling Mrs. Crandall that the alarm was set at 2 am and both clock and alarm have run down, Burger stating the police have better things to do than wind clocks, the judge saying there needn't be an argument and asking Mason what he wants to do. Submitted by Wiseguy70005, 8/01/12.

Incorrect show summary: The show summary incorrectly states that the trial convened in the room where Kane was killed. It actually convened in Ellen Crandall's bedroom in the building next door. Submitted by Duffy, 5-7-2014.

Suite 904 Brent Building This is only the second mention of Perry's office location, the first being in episode 27 TCOT Desperate Daughter. jfh 02Jul2019

Movie: This story was made into a movie released in 1935 with Warren William as Perry Mason and Claire Dodd as a blonde Della Street. It is available on DVD. Submitted by H. Mason 10/18/14
+ Turner Classic Movies shows this film from time to time (recently in March 2019). The head detective, not named Tragg, was played by Barton MacLane, who played a similar role in The Maltese Falcon and probably countless others. He appeared in four PM tv episodes. Also making an appearance in the 1935 film was Errol Flynn - no lines, though, as he played the corpse for just a few seconds at the very end. JohnK 14 March 2019

This is the second of three PM appearances for Christine White. She was born in Washington, DC, in 1926 and passed there in 2013. She had an English degree from the University of North Carolina...MIkeM. 9/7/2016

This is the first of 33 PM appearances for S. John Launer (Judge), who had recently appeared in 23 of 26 episodes of Erle Stanley Gardner's "Court of Last Resort", which dramatized authentic cases where ESG tried to establish the innocence of incarcerated individuals...MikeM. 6/19/2018

In the deposition scene with Philip, Carl, Mason, "Burger" and the stenographer, notice how we only ever see the back of "Burger's" head, and how careful the actor is not to move his head at all or turn it so we can see more of his profile. The haircut doesn't look like Burger's haircut, and the ears don't look like Burger's ears: most likely a stand-in. cspoleta 10/24/2018

TCOT Wandering Fire Extinguisher: Unless i am mistaken, this is the first appearance of the wall-mounted fire extinguisher that appears in the halls of many boarding house, hotel, and apartment building scenes. It is shown twice in this episode, in two different places -- the apartment and the hospital, if i remember correctly. Also the triangular corner etagere has a cameo appearance. Submitted by catyron, December 17th, 2020.

Gavel Tally - When Burger becomes irate at finding out the apartment bell was a buzzer at the time of the murder, the judge bangs his gavel to recall Burger ". . to the proceedings at hand." OLEF641 1/10/22

Bad Accent Dept. Mason may have a sharp mind but he has no ear for accents; he credits the blonde he bumps into as having a "Jersey City accent," but she exhibits not a trace of it. Submitted by francis, 6/14/13.

This is the first of many episodes in which William Hopper works with an actor he had worked with before PM. He and S. John Launer worked together a few years earlier in an episode of Gunsmoke, "Robin Hood". Launer played a judge in that episode too! Submitted by DyNama, 3/15/2014.
+ SJL's Filmography Begins with a "Judge" role, "Meet Corliss Archer"/1954, & Ends with a "Judge" role: "Billionaire Boys Club"/1987 [IMDb]. Mike Bedard 5.25.16.//

This is the first of two consecutive episodes where an alarm clock plays a crucial role. In both episodes we see Perry winding the clock in court (although at least it's not the same clock). Submitted by 65tosspowertrap, 5-8-14.

Free rent: How long did Perry allow Sidney to stay in the apartment? Submitted by H. Mason 10/11/14

Camera Focus problems? This episode had two scenes were the camera focus did not seem right. The first was when Perry was standing by the jury box and Burger at his table. The camera was behind the jury. During this sceene even after Burger stopped talking and Perry continued, the camera focus was on Burger and Perry was always severely out of focus. The second time was at the scene where we got the confession with Perry and Burger were in focus while the murderer was clearly out of focus as he talked. When you watch the DVD version on a large screen HD TV you see a lot of details including all the beat up set furniture. Submitted by Perry Baby 1/20/15.

Della and Paul sitting very close and cozy on Della's desk as Rhoda, leaving Perry's office in a huff, flings open Perry's office after her first visit (9:45 in the DVD). The scene is so artfully staged that it is hard to avoid the impression the director is toying with us. Don't they know we could never suspect Della and Paul of anything? Fred Flintstone 12/27/2020

Incredible Parlor Trick Annex If TCOT Caretaker's Cat - 14 episodes on - is "without doubt the most convoluted of all episodes," then this episode, without doubt, contains the most absurd client-aiding strategy in the entire series: not only does Perry go to all the trouble of buying an apartment house for a simple demonstration, he tampers with evidence, and explicitly directs someone to give misleading testimony. I don't have trouble with the latter two elements - on the contrary they seem much in keeping with the wily defender portrayed in the novels - but rather with the idea that he would admit to such in open court, and the judge would do no more than look on amusingly. Even in the implausible perryllel universe that is the show, it's beyond credibility that anything less than a(n immediate) mistrial, and charges of obstruction of justice - if not disbarrment - would result. Ranted by Notcom, 052516.
+ Mason's actions were not only dishonest, they were pointless. He went to a lot of trouble to create the false testimony that the neighbor, Ellen, heard the alarm clock at 2 am, rather than the doorbell at 2:15 am. But it was also pointless. He solved the mystery by deposing Casey Adams/Max Showalter and confronting him with the fact that a second car left his home after his "wife" went to meet the blackmailer. But this decisive confrontation could have been done without any tampering with evidence as to the time of death. BTW, the fact that he bought the apartment complex, which entitled him to enter, would not have protected him from a charge of obstructing justice. Ed Mahl 9/27/17
++ What evidence was tampered with? The original doorbells were never submitted as evidence, only the one that the buzzer hating tenant that moved in installed. Submitted by HamBurger, 10/7/2017

Indeed, the vital clue is so obvious that even on first viewing we knew the killer from the moment that garage door wouldn't close. All that rigmarole with bells and buzzers was just a lot of filler meant to show how clever Perry was in defending his client. He did nothing illegal or unethical. He just cleverly maneuvered Burger into showing his own witness was not particularly credible. With that anticlimactic ending, all in all not a very memorable show. DOD 07/02/19

Incredibly Indulgent Literally. After Rhoda learns her (maybe) husband is the killer yet still let her be charged for murder, she says she "stands by" Carl. When told Carl wants an anullment, she asks "he doesn't need me?" Abosolutely absurd. I guess though the perfect ending to an implausible episode. Rick P 10/5/21