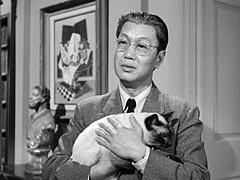 From The Perry Mason TV Show Book (Revised)
Peter Baxter had a plan to test the loyalty of his heirs. First he would pretend to change his will, cutting all of them out and leaving the estate to his caretaker, James Hing. Then Hing was to burn down Baxter’s house and Baxter would substitute a medical cadaver for his own body. If anyone contested the will, he or she would really be disinherited. Hing does as his employer planned, but the body found in the ashes is really that of Peter Baxter. Tragg and Burger don’t believe Hing’s wild story, but Perry does. It’s just too fantastic to be a lie. That means one of the heirs overheard Baxter planning, and really did kill him. The question is: Which one?

This episode uses a different opening credit scene than the nearby episodes (before and after) of Season 2. Rather than seeing Perry receive a document from the judge, look at it, and show it, in turn, to Della, Paul, Burger, and Tragg, this episode starts with a pen and inkstand on the bench; Perry picks up a document, looks at it, the scene freezes, and his image shrinks to fit into the sword of Justice. This opening scene is common in episodes from season IV (I think) but is anomalous here. Does anyone know why it was used here? Submitted by 10yearoldfan, 2 June 2012.

Sightings: Our little dark-complected friend with the pencil-thin moustache—who often sits in the courtroom gallery—appears again in this episode. He is in the right rear corner behind Perry, and again whispers. The difference this time is that when Winifred Oakley and Dr. Douglas Keene enter Beverly Hills Doctor Hospital early in the episode, he is also sitting in the waiting room. Submitted by PaulDrake 33, 24 July 2008.
+ He is also drinking at a restaurant where Perry and Paul meet. We see the Pencil Mustache Man as the camera pans from the waiter making Caesar salad (with raw eggs) over to Perry and Paul’s table.
+The Thin Man is eating at the Restaurant behind Perry and Paul. And the Distinguished Lady #4 is watching court from her favorite spot in the back row behind Perry. Submitted by BigBill767, 2/4/17.

Judy Lewis makes her only Perry Mason appearance playing Winifred Oakley. Judy Lewis was the daughter of Loretta Young and Clark Gable, the result of an affair on the set of the movie Call of the Wild in 1935. At the time Clark Gable was married to Maria Franklin Gable and Miss Young was unmarried. Submitted by PaulDrake 33, 24 July 2008.

John Agar makes his only Perry appearance here as Kenneth Baxter. John Agar is well known for being the first husband of Shirley Temple from 1945-1950. Submitted by PaulDrake 33, 22 February 2014.

Does Mr. Hilliard, the banker, look familiar? He might. That's Raymond Bailey who later achieved fame as banker Milburn Drysdale on The Beverly Hillbillies. Submitted by daveb, 5/14/2010.
+ Raymond Bailey has more banking connections than this. When Bailey first came to Hollywood to be an actor, he found it impossible to get work. Instead Bailey went into a high finance career working as stockbroker and banker. This according to his mini-bio at IMDb. Again, art imitates life. Submitted by Charles Richmond, 3/7/2012.

Character Names: Attorney Gordon Roland’s middle initial is “T”. It appears on the door to his office though it is omitted from the credits. Submitted by gracep, 8/20/2010.
+ Indeed there are more omissions. In previous episodes, the Autopsy Surgeon played by Michael Fox was Dr. Hoxie, though this name is omitted in the credits in this one. Additionally, the “Paint Store Clerk” is in fact A. J. Nelson, the proprietor of the paint store, who displays the stamp at the bottom of his paint can. Submitted by gracenote, 4/28/2011.

+ The address of the paint store, "2718 Clayton Ave, Los Angeles, Cali" is now in a residential neighborhood according to Google Maps. Submitted by Kilo 6/27/2017.

The Siamese cat owned by Hing (the eponymous caretaker’s cat) is named Monzu in the story, but the little feline did not receive any acting credit. Submitted by gracep, 8/20/2010.

Sightings: Through the courtroom door we see Little Old Lady in a Hat pausing in the hallway after the court recesses. One may see a glimpse or two of her during the hearing as well. Submitted by gracep 8/20/2010.
+In the same hallway view mentioned above, we can also see “Miss Carmody”, who shows up on the front row, prosecution side, during the proceedings. Other spectators include Distinguished Gentleman #1, Distinguished Lady #3, and of course, as pointed out in a trivia item above, Pencil Mustache Man. Submitted by alan_sings, 16 Oct 2010.

Monzu looks like the traditional, round-headed kind of Siamese cat. Around the time of Perry Mason (the 1950s), Siamese breeders started favoring more extreme triangular/wedge faces, and now a purebed traditional is rare. Submitted by gracenote, 4/28/2011.
+ The Traditional Siamese has undergone something of a revival and can be shown at cat shows that recognize them.. OLEF641; 10/17/2017.

Movie: The Erle Stantey Gardner story that inspired this episode was made into the movie The Case Of The Black Cat with Ricardo Cortez as Perry Mason and June Travis as Della Street. It was released in 1936 and based on the serialized story with the same title as this episode that appeared in Liberty Magazine from June 1935 to September 1935. The movie is available on DVD. The only cat in the movie, named Clinker, wasn't black. Submitted by H. Mason 10/19/14
+ The movie bears a much closer relationship to the ESG source novel than does this episode. The episode changes the number of victims (from two to one), and the identities of both the defendant and the remaining victim. Toss in the novel's (and movie's) additional dead body and multiple killers and you have a recipe for a teleplay that significantly altered the novel's plot, but did not necessarily improve on it. Submitted by BobH, 17 October 2016.

This is the only PM writing credit for Richard Macauley who, according to Wikipedia, was very conservative and gave the HUAC names of Hollywood people he suspected of being communists...MikeM. 9/27/2016

This is the second of four PM appearances for Benson Fong (James Hing), who played Charlie Chan's Number Three Son, "Tommy Chan", in six movies. Benson Fong passed in 1987 at the age of 70. He was survived by his wife, five children, and nine grandchildren...MikeM. 7/9/2018

This is without a doubt the most convoluted episode of all the Perry Mason shows. To think a wealthy man would try to come up with a cadaver, then burn down his own mansion with all of his relatives' possessions contained within only to test his heirs' fidelity defies belief. How about trusting your own judgment? Submitted by PaulDrake 33, 7/24/2008.
+ Perry does say: "It's incredible that anyone could conceive a plan so incredible." Mike Bedard 6.21.16 MeTV viewing. // +I have to agree that the 'test' seems strange. Especially when the heirs are only getting $1, they really have nothing to lose by contesting the will, especially the favored niece, who was probably hurt that her uncle didn't leave her anything. Also, wouldn't the doctor be risking his medical license and/or reputation by providing a cadaver to be burnt? Isn't that some sort of crime? Wouldn't the doctor have shown up, even without a call, since he had to have the cadaver ready on that particular night? —yelocab 30DEC19

Perry asks Paul to find out how much insurance was paid after the fire. In a case of arson, no insurance would be paid. DOD 07/22/19

Both “Caretaker’s Cat” and the previous episode “Jaded Joker” open with a piano tune. In “Jaded Joker,” Bobby Troup seems to be improvising a tune. In “Caretaker’s Cat,” Judy Lewis is playing a finished composition. I may have a tin ear, but it seems to me both these tunes hare very similar. Perhaps, they are different parts of the same tune? Submitted by billp, 2/22/2009.
+ At the end of episode #57, Bobby Troup is credited with composing and performing the “Jaded Joker Theme.” It could well be the same tune played in the next episode, but there is no mention of it in the credits for episode #58. Submitted by gracep, 8/22/2010.
The two songs do have a similar tempo, but they sound completely different from one another. The Jaded Joker Theme, written and performed by Bobby Troup, is a 'darker' piece while the one played by Judy Lewis is a more cheerful tune, and reminds me of an 'old standard' type of tune. If the two pieces ARE related, they would have to be separate movements of a large concerto. Submitted by Arisia, 2/16/2018

At two points during his examination of Nurse Devoe, Perry refers to an earlier conversation he had with her. This seems to have been edited out of the TV print I saw, though. I often wonder whether key clues have been edited out! Submitted by Ed Zoerner, 2/26/2011.
+ Indeed! I compared the DVD version of this show with one taped off the Hallmark Channel and found that the entire 1 minute 55 second scene where Perry talks with Ms. Devoe in her room is missing! I didn’t watch enough of the episode to know if there were any key clues, but there was a lot of talking. Submitted by daveb, 2/27/2011.

During his cross-examination of Dr. Keene, one of Mason's lines, regarding the findings of the autopsy surgeon, is dubbed in. Besides acoustical difference, one can tell, even when Mason's head is mostly turned away, that he's saying something other than what we're hearing. Submitted by francis, 2/11/12.
+In fact, every time Burger or Mason mention "volatile spirits," the lines are clearly dubbed over. I found the explanation on the IMDb Website: "...whenever the name of the accelerant ... is mentioned, the phrase "volatile spirits" is repeatedly - and obviously - dubbed in by the original actors. A check of the script ... shows the accelerant was originally "mineral spirits", a paint thinner. Apparently, CBS censors objected to on-air mention of an actual substance that could be used to start fires, hence the dubbing-in of the more generic-sounding "volatile spirits". Submitted by scarter, 7-21-14
+ In the scene where the bottle of volatile spirits was first pulled out of the closet the bottle was labeled "Mineral Spirits". Later a close up of the bottle shows the label now says "Volatile Spirits". Submitted by Kilo 4/17/2018.

When Burger questions Keene it is possible to see jug is labeled ‘mineral spirits’. So was there a second will that would allow Winifred to inherit? DOD 07/22/19

CBS is known for alternating opening credits on its programs. In addition to the change of opening in this episode, during the 195-episode syndication run of Perry Mason in the 1970's, more than half of the first season had the second season theme dubbed over the opening and closing credits although in many episodes the opening and closing themes didn't match. The themes have since been restored. For The Twilight Zone, again about half of the first season episodes had the opening replaced by the second season version. These continue to be seen in syndication, cable and VHS. I don't know if the original openings have been restored for the DVDs and Blu-Rays. The only reason for this would seem to be to fool the viewer into thinking the episode is not as old as it is. Submitted by Wiseguy70005, 6/15/12.