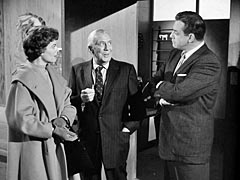 From The Perry Mason TV Show Book
Frankie Laine, the singer of TV theme songs (“Rawhide”), made his acting debut in this story. He plays Danny Ross, a funny man with an unfunny problem. His agent, Charlie Goff, double-crossed him, and told the network that the comedian wasn’t right for a big project that Danny had developed. Danny is mad and goes to Perry for help, accompanied by long-time friend Freddie Green. But since Danny had only an oral agreement with Goff, Perry has a tough job ahead of him. It becomes even tougher when Goff is found murdered.

The evidence points toward Danny’s friend Freddie Green. Perry agrees to defend Green, but must get into jive and beatnik lingo to understand the clues that lead him to a bohemian club called the Purple Wall, and to the killer. Continuing with the musical theme of the plot, jazz musician and bandleader Bobby Troup also appears in this episode.

Anomaly: Mary LaRoche, listed as Lisa (as in Lisa Kudrow) Hiller, is called Liza (as in Liza Minnelli) throughout the show. [D. A. Supernaw]

The book, Legal Medicine, Pathology and Toxicology, by Gonzales, Vance, Helpern and Umberger, that is discussed in court was indeed an authoritative textbook on the subject at the time. Helpern was a friend of ESG. Submitted by daveb, date unknown.
+ In an extensive forword, Gardner dedicated his book The Case Of The Hesitant Hostess (1953) to his friend, Dr. Milton Helpern (1902-1977), who for 20 years was New York City's Chief Medical Examiner. submitted by DyNama, 9/3/2014

Martha Vickers (who played Carmen Sternwood in the classic Bogart film The Big Sleep, who was one of Mickey Rooney's wives, and who died much too early at age 46) makes her only Perry Mason appearance in this episode. Submitted by PaulDrake33.

Why does ritzy Sheila Hayes hang around with Buzzie anyway? DOD 08/03/20

Sightings: Little Old Lady in a Hat appears (hazily) in the first courtroom scene on the defendant’s side. Another recurring “guest” is a distinguished woman with long hair and a hat (a.k.a Distinguished Lady #1). Submitted by gracenote, 8/19/2010.
+ Other spectators include “Miss Carmody” and Quiet Old Man #1 (who is seen in an unusual profile view during the exit from the courtroom). And that may be Distinguished Gentleman #1’s distinctive hairline behind the closeup of Sheila Hayes. Is it? Submitted by alan_sings, 16 Oct 2010.
+The Distinguished Lady #4 watches from both Burger's and Perry's side. Submitted by BigBill767, 2/4/17.

The statuette that Sheila Hayes taps on Harry Jackson’s desk as she says “that” is of course a miniature reproduction of Auguste Rodin’s The Thinker. Submitted by gracenote, 4/11/2011.

When she calls to report the murder, the secretary gives the address as 1-1-7-2 Wilshire. Since LAPD has jurisdiction, this may put the office in the vicinity of Wilshire and Lucas Av in downtown Los Angeles...MikeM...6/20.2016

Uncredited Actors: Don Anderson is the bailiff guarding the prisoner Green as he speaks to his attorney Perry. Later he turns up in the courtroom, and then escorts the defendant out again. Submitted by gracenote, 4/11/2011.

Tom Drake is perhaps best known as 'the boy next door' in Meet Me In St. Louis opposite Judy Garland. One of my favorite of his roles was in the somewhat obscure 1959 western Warlock in which he plays a cold-blooded criminal. The movie stars Anthony Quinn and Henry Fonda; Trekkie alert: DeForest Kelley has a smallish but fairly pivotal role in Warlock. OLEF641; 10/17/2017.

This is the first of five PM appearances for veteran character actor Walter Burke (Freddie Green), whose parents were Irish immigrants living in Brooklyn. Beginning on the stage in New York, Burke transitioned to movies and then television. His last television roles were in 1980. Walter Burke passed in 1984 at the age of 75...MikeM. 7/6/2018

TCOT Substitute Coffee Cops: My gosh, in this episode, as we await the entrance of the Canonical Curious Coffee Cups, we get BOTH sets of Substitute Cups. First Danny and Freddie eat their bagels, schmear, and Nova Scotia lox on the conical art deco set with the painted rings and the 7-shaped handles. Then, in Perry's office, Perry, Della, and Paul sip and chat with the so-far-unidentified floral / aquatic set of restaurant ware. Submitted by catyron, December 31st, 2020.

When Tragg first encounters the bohemian jazz piano player, he dips his finger into the ashtray and smells it. Then the piano player offers Tragg a drag on his cigarette, which Tragg also smells without taking a puff. In this 1959 episode, what does Tragg expect to find in the ashtray and cigarette? Submitted by unknown, 1/31/2009.
+He probably smelled marijuana in the air, as the ensuing conversation makes it [vaguely] clear —yelocab 27DEC19

I’d say Lt. Tragg was testing for marijuana. While it’s not clear that Tragg actually picks it up, it’s clear he threw a butt back into the ashtray. So rather than smelling his fingers, we’re supposed to think he’s smelling a butt. This probably explains the subsequent interaction between Tragg and the appropriately named “Buzzie” as in “stoned.” Note Tragg says “I thought I smelled ‘tea.‘” Tea would be beat for “marijuana.” “Shamus” would, of course, be “detective/cop.” Submitted by billp, 1/31/2009.

Buzzie is, of course, Bobby Troup. Troup was a man of parts—composer, musician, etc. There was the Bobby Troup Trio. He composed the hit song, “Route 66.” Watch and listen here. Although I didn’t care for the show, I remember him as Dr. Joe Early on the TV show Emergency. Submitted by billp, 1/31/2009.

+ Bobby Troup also composed "The Girl Can't Help It," fashioned into a hit by Little Richard. Wikipedia tells us Troup wrote it for Fats Domino, but that version didn't happen. JohnK, 10 December 2020

There‘s some great dialogue in this episode; e.g, Perry asks: “What’s the ‘Purple Wall’?” Paul answers: “It’s a beat joint—no liquor, no life, no laughs. Just sitting around hating yourself.” Submitted by billp, 1/31/2009.
+ Lt. Tragg's Beatnik Slang, at the end, is Priceless! Mike Bedard 6.20.16 MeTV viewing.
I always liked Frankie Laine and who could forget Rawhide?! Listen here. Of course this reminds me of another great Western and its theme song, The Rifleman. What great themes TV had in those days! It may sound nostalgic, but it’s accurate to say that TV generally was far superior to the junk it is today. That covers the full spectrum—drama, comedy, news, etc. TV is really dumbed down today. I guess it’s the times we live in. Submitted by billp, 1/31/2009. ++I'm guessing there was also a lot of junk on TV back then that got forgotten, and only the good stuff lasted through the years via reruns. So your opinion might be a bit skewed. But then again, with only 3 networks, budgets were probably higher. —yelocab 27DEC19

The whole image of being “born again and square” and “stuffed into the knee-hole of the desk” is great! Generally, TV shows and movies that are too contemporary or topical don’t age well. This is true of many TV shows, especially those from the 70s on. This was when “message” TV/movies started in earnest. There are many problems with this. The least being it tends to quickly “date” the series or movie. Generally, Perry Mason tended to focus on more basic or archetypal motivations. These tend to be timeless. The late 50s/early 60s fashions are also classic. They look good in any era. So, as a rule, Perry Mason doesn’t really appear dated. Only in the last years of the series when it started to get more topical in story and “look and feel” does it start to feel dated. The instant episode exhibits a bit of this problem with the “beat” context, but because the story, dialogue and acting are strong, it still comes off pretty well. Submitted by billp, 1/31/2009.

Both “Jaded Joker” and the following episode, “Caretaker’s Cat,” open with a piano tune. In “Jaded Joker,” Bobby Troup seems to be improvising. In “Caretaker’s Cat,” Judy Lewis is playing a finished composition. I may have a tin ear, but it seems to me both these tunes are very similar. I’m guessing they are the same tune. Agree or disagree? Submitted by billp, 2/22/2009.
+The tune -- played three times in "Jaded Joker", once at the beginning, once when Tragg barges in on the Ross apartment, and once at the end at the Purple Wall -- is listed as the "Jaded Joker Theme" by Bobby Troup in the end credits, but to my ear it sounds startlingly like "Ruby, My Dear", a jazz standard by Thelonious Monk. I think Bobby Troup was one of the greats -- this is said with no disrespect. OldDave 8/9/20

Bobby Troup, an accomplished musician and songwriter, looks to be playing the piano pieces in the show; this adds to the authenticity of the episode. All the more’s the shame, then, that toward the end the guitar music is so badly faked by a crazed-looking extra who clearly has no idea how to play. Submitted by Ed Zoerner, 2/21/2011

Danny and Freddie are a gay couple living together, though this is not noticed in dialogue. Early in the episode, the pair descend the staircase in bathrobes. Freddy alibis Danny for the night of the murder. We viewers are so busy ogling the beatnik lifestyle, decoding beatnik lingo and puzzling over showbiz Yiddish, that the unusual (for 50s television) household slips right by us. Submitted by DebbieF, 5/7/13
+ The dialogue may have indirectly referenced this relationship. At one point, Perry asks Paul "What's the relationship between Danny and Freddie?". Paul replies "I don't know". I'm quoting from memory, maybe someone can check. Submitted by Bill-W2XOY on 08/15/2013.
+ The dialogue is: Paul: "...before he [Freddie] latched on to Danny Ross"; Perry: "What do you mean by 'latched on'?"; Paul: "I don't know yet." OldDave 8/9/2020
++ My impression was that Freddie was just a flunky, a hanger-on, like Buzzie. He wasn't quite as detached as the pianist, but I didn't see any sparks flying. That they both came down in bathrobes doesn't mean they'd emerged from the same bedroom. Not that there's anything wrong with that. Submitted by francis, 7/11/14.

Beer For Breakfast: It's not clear what time Danny is having breakfast (bagels and lox) but beer appears to be the beverage of choice. When Freddie comes down to join him there are four bottles of beer on his side of the table. Two are already open ready to be poured. Submitted by Kilo 4/15/2018.

As in the best shows, this one leaves us with an interesting legal question. Freddie claims Goff was already dead when he shot him; Buzzie claims Goff was dead when he stuffed him under the desk. What if both were wrong? If Buzzie were to ask Perry to defend him, Perry would be in the awkward position of trying to show Goff survived Buzzie’s attack and it was indeed the gunshot that killed him. DOD 07/05/18