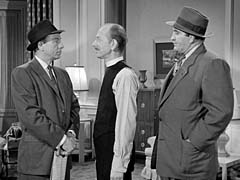 From The Perry Mason TV Show Book (Revised) Carol Delaney is a lovely young woman from the Midwest living happily in Los Angeles until Arthur Mallory, a stuttering bishop from Australia, walks into her life with a wild tale of adoption and inheritance. Mallory claims Carol is actually the granddaughter of multimillionaire Charles Burroughs, that he placed the infant Carol with a loving family at the request of her mother following the death of her husband, Charles Burroughs, Jr. To complicate matters, another young woman has come forward claiming to be the heir to Burroughs's millions. When the stuttering Bishop Mallory brings Carol Delaney and Charles Burroughs together, he expects a joyous reunion.

But when Burroughs is stabbed to death Carol becomes the main suspect. Perry must prove not only Carol's innocence, but her right to inherit Burroughs's name and fortune. 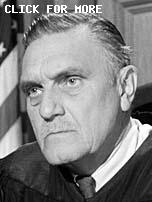 Based on the Erle Stanley Gardner novel of the same name, The Case of the Stuttering Bishop was previously made into a movie in 1937. Donald Woods starred as Mason, with Ann Dvorak as Della Street.
+ In the 1937 motion picture adaptation, Burger's name is pronounced with a 'j' sound, and not a hard 'g' (Ber-jer). Submitted by Chief Kurtz 10 January 2022

Location: The home occupied by Charles Burroughs would be used again only three episodes later, #62 TCOT Howling Dog. Oh, there is different furniture, and some things have been rearranged, but the distinctive double doorway entrance, and the sun burst over the doors gives it away. Submitted by PaulDrake33.

When Philip Burroughs is being sworn in off camera, the “I do” is clearly in the distinctive voice of actor Ken Lynch (Wallace Lang).

Killer Karl Davis (pictured above) makes his only appearance on Perry here playing Leo Kaster. Most people would think that Killer is a strange name for an actor, but Karl Davis was orginally a professional wrestler, and Killer was his ring name. Submitted by PaulDrake33, 11 August 2009.

Herb Ellis makes his only Perry appearance here playing the Deputy District Attorney. Herb Ellis was the original Officer Frank Smith on the original Dragnet in 1952 for 8 episodes before he was replaced by the more familiar Ben Alexander playing the same role. Submitted by PaulDrake33, 11 August 2009.
+Although this is true, it should be noted than Sgt. Joe Friday had two partners before Officer Frank Smith: Sgt. Ben Romero, played by Barton Yarborough, who died shortly after the series started, and Sgt. Ed Jacobs, portrayed by Barney Phillips for the remainder of the first season. Submitted by Wiseguy70005, 1/24/13.

Sightings: The Little Old Lady in a Hat sits behind Distinguished Gentleman #1 and “Miss Carmody” (who sit behind Janice Burroughs) in the courtroom. All three have moved to new seats on the defense side when court reconvenes. More about these frequent courtroom spectators here. Submitted by gracep, 8/23/2010. Additions by alan_sings, 16 Oct 2010.
+Little Old Lady #2 sits in the last row behind Perry with a hat. The Distinguished Lady #4 sits behind Miss C. submitted by BigBill767, 2/4/17.
Movie: This story was made into a movie released in 1937 with Donald Woods as Perry Mason and Ann Dvorak as Della Street. It is available on DVD. Submitted by H. Mason 10/18/14

This is the second of five PM appearances for Rebecca Welles (Carol Delaney), who married film and television director Don Weis in 1961 ...MikeM. 9/28/2016

The radio in Bishop Mallory's room is a Zenith model R625-Y AM radio. Notice the "H" in ZENITH on the front of the radio is missing. Submitted by Kilo 6/27/2017.

+ And coming out of that radio, for a few seconds in the opening scene, is the swinging tune we hear at the ballroom in TCOT Hesitant Hostess. JohnK, 7 October 2022

Gavel: Notice the gavel when Philip raises his hand to get sworn in the second time and after he sits on the witness stand. Submitted by H. Mason 10/18/14

This is the only PM appearance for Joan Vohs (Janice Burroughs), who gave up show business in 1969 and devoted herself to her family and church. When she passed at age 73 in 2001, she was survived by her husband, son, daughter, sister, and grandson...MikeM. 7/10/2018

Six Pack? yet another newspaper - Tribune - is mentioned here (albeit quite briefly); accoriding to H Mason's census that would make six (along with Chronicle, Star-News, Bulletin, Evening Star, Clarion...tho perhaps only five if the second and fourth mentioned are actually the same). The masthead would, of course, become well-known to TV viewers on the long-running show Lou Grant. Writing all about it, Notcom 120519.

When we meet Charles Burroughs (at 12:10), he is practicing golf with a putter in his study. I had predicted the putter would be the murder weapon. Actually, he gets stabbed with a carving knife. This knife had been shown earlier (at 7:00) being used by Carol Delaney to carve meat at her own dinner table. The dinner scene even starts with Carol pulling the knife from its sheath. I commend Gene Wang for placing his clues well and for ably making it hard to predict his story line! Submitted by 10yearoldfan, 27 May 2012.

Vaughn Taylor plays Bishop Mallory very well: he is genuinely delighted to hear Carol's answers to his questions (at 4:30), proving that she is the girl he is looking for. On the other hand, Della is given lines to mislead the viewer, casting doubt on the Bishop's authenticity (at 11:40): "There's no one alive who can vouch for his story." I tend to trust Della's instincts. Once again, I commend Gene Wang for making it hard to predict his story line. Submitted by 10yearoldfan, 27 May 2012.

When Kidd and Janice Burroughs discover the 1st body, she had dipped fingers rather well into the pool of blood outside the door. Then when she finally sees the dead form, she screams and puts her hands over her face. No blood. Quick cleanup. Sgt.Cola 05Sep2022

I didn't understand that whole scene with the operative Blanch pretending to be Janice's mother. What was the point? Kilo 10/24/2019.
+ The operative was hired to pump Janice for information. jfh 05Aug2020

When court reconvenes after the discovery of Bishop Mallory's body we can see Janice and Lang sitting together in the front row. Within seconds Lang is replaced by some stranger. There's also a rearrangement of the spectators behind them as well. When Philip Burroughs is recalled they're all back to their original positions. Kilo 7/21/2020.

Jonathan Kidd does a wonderful job in his part, teetering on the edge of overacting but just staying within bounds of lovely, smarmy, scenechewing. OLEF641 12/18/2020

We are given a strong clue that Philip Burroughs is lying when he pays his first visit to Mason's office (at 17:20). He tells Mason, "I told him [Charles] he was wrong!" But earlier (at 12:50) Charles Burroughs had disparaged Philip for never having had the nerve to contradict him. Submitted by 10yearoldfan, 27 May 2012.

Sometimes in Perry Mason, the killer could be any of a number of suspects. In this episode, all the evidence incriminates Philip. He is completely unsurprised (at 18:26) when he sees blood flowing under the door to his uncle's study. His line (at 19:15), "Something is wrong with the light switch" is unnatural for someone who knows the house and its lighting fixtures so well. He is again completely unsurprised (at 19:27) when he turns on the light to reveal the dead body. He is utterly creepy (at 20:24) when he insinuates that Janice might have been the killer (look at those evil white eyes and wart-covered cheek). His proposal to conspire with Janice to pin the blame on Carol is clearly pre-meditated. Aside from Perry's client, he alone had motive to kill Charles before the will could be changed. Even Della disparages him (at 31:20), "He has all the finer instincts of a scorpion." Once again, Gene Wang has made the Perry Mason series as a whole unpredictable, by occasionally making the real culprit so obvious that the viewer is tempted to look elsewhere. Submitted by 10yearoldfan, 27 May 2012.

10yearoldfan, pretty astute. Jonathan Kidd's 'Philip Burroughs' is one of the more loathsome characters to ever appear in a Mason story .. but I equally thought that 'Wallace Lang', or 'Janice Burroughs' might have done the deed. I often wonder if actor Ken Lynch scared small children and sensitive adults with that rock-grinding voice of his! This was a pretty good episode. 'Wallace' looked like he'd had a knife stuck in his gut as Perry peeled the layers off of his scheme with 'Janice', and poor 'Janice' looked as though she was going to faint, throw up, or both! Submitted by MikeReese, August 23,2013.
+ Ken Lynch played Chief Engineer Vanderberg in Star Trek's "Devil In The Dark," Detective Sergeant Grover in "McCloud" & Admiral Gray in "The Winds of War" [189 IMDb credits]. Mike Bedard 6.20.16.
+ Lynch's voice reminds me of Froggy of the Our Gang movies from the early 40's. Submitted by Kilo 4/18/2018.

Sorry, but the murder scenario makes no sense. If Charles Burroughs had been sedated, he wouldn't be by the door, he would be sitting or lying down somewhere, and not necessarily in the office. And just where did all that blood come from? Where did Philip get it and how did he put it under the door before breaking into the room? And how did Philip get into Carol’s apartment to find a weapon he didn’t know would be there and where was it when he broke into the room? Nothing works. DOD 07/10/18

The envelope: At the end of the show Perry handed a letter to the real Janice from her mother. Why didn't Wallace Lang and Leo find it in the hotel room? Weren't they looking for that type of item? Submitted by H. Mason 10/18/14

Loose End? I was left wondering about the multiple clues, including stutter/no stutter, that the Bishop Mallory we saw was an imposter. Almost everybody was sure he was a fraud. In the end, his body was identified by his friend. So how do we account for the suspicious elements surrounding his character that suggested he wasn't the real bishop? I know they were red herrings, but a better script would have included a plausible explanation. Submitted by JazzBaby, 8/14/2019.