From The Perry Mason TV Show Book
Law professor Edward Lindley (Michael Rennie) believes that a good trial lawyer is a combination of jackass and parrot. Seriously, though, he has great respect for men like Perry Mason and gets some practical experience of his own when a student of his confesses to having killed a man.

Janice Norland claims to have killed a blackmailing dance instructor, Raul Perez, by hitting him with a poker. Lindley checks her story and finds no body. Since Perry is still unavailable, the law professor takes on Janice’s case and winds up in court when Raul really is killed.

The police discover that Raul was using a remotely-activated camera to gather blackmail material, a fact that works against Janice. One of those photos shows her standing over Raul’s dead body. It’s a curious case, made even stranger by the fact that Janice's mother was the real object of Raul’s schemes. 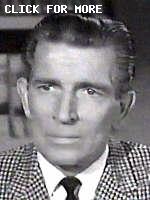 Anomaly: Carlos Romero, listed as Raul Perez, is called Reyo in the show.
+ At times they might be saying [RĀ-əl]—an anglicized pronunciation of the man’s name (though often they are sloppy with the final “L”). Submitted by gracep, 1/26/2011.

Did you catch that line from Lt. Andy about “the Martian nine feet tall?” Could this be a reference to Michael Rennie’s famous film, The Day the Earth Stood Still? Submitted by Mitch English, 1/19/2005.
+ "One of the reasons Michael...was cast as Klaatu was because he was generally unknown to American audiences & would be more readily acceptable as an 'alien' than a more recognizable actor [IMDb, TDTESS, 1951]." Sci Fi guy Mike Bedard 2.5.15.

John Hoyt was in the 1961 Twilight Zone episode "Will the Real Martian Please Stand Up?" Mike Bedard 2.7.15.

+Star Trek Alert: The prolific Hoyt also appeared as the starship Enterprise's chief medical officer in the pilot for the original series Star Trek, a role ultimately taken over by DeForest Kelley, of course. He made five Perry Mason appearances. Note that if Leonard Nimoy is actually in the gallery (as suggested in a post below), that's two Star Trek actors in this episode. Submitted by MyFavoritePolarBear, 11/12/22

The music used in certain tense, dramatic moments in the early scenes was reused as the theme music in the CBS Radio Mystery Theater of the 1970s-80s. It has a distinctive drum roll and deep, rumbling bass. Submitted by gracep, 1/26/2011.
+ That music was composed by Van Cleave (aka Nathan Van Cleave) for The Twilight Zone episode "Two" (broadcast 9/15/61) starring Elizabeth Montgomery and Charles Bronson. The complete 12:13 track can be found on the Varese Sarabande album The Twilight Zone: The Original Television Scores Volume Four (STV81192) and the CD The Best of The Twilight Zone Original Television Scores Volume II (VCD47247). Submitted by Wiseguy70005, 6/15/12.

Character Names: Michael Fox is credited only as “Physician,” but surely it is the same Dr. Hoxie as from earlier seasons. Submitted by gracep, 1/26/2011.
+ ESG used the name "Dr. Hoxie" in at least one of his books as the Medical Examiner. I am in the process of re-reading the books, so I will see if the name pops up again. Submitted by Bill-W2XOY on 08/15/2013.

Paul's Men: Paul said he had men looking for R. Perez. He received a call from an operative named Connors informing him that Perez was dead. Paul used a man named Alan Connors in episode 121 TCOT Duplicate Daughter. Submitted by H. Mason 1/16/15

Sightings / Uncredited Actors: As Drake, Lindley, and Della confer before the hearing begins, we see Little Old Lady #1 and “Miss Carmody” filing into the courtroom with the other spectators. Along with these two ladies, Quiet Old Man #1 and uncredited actor Don Anderson appear in the gallery. Submitted by gracep, 1/26/2011.
+ And isn't that the Little Old Lady in a Hat sitting behind Janice Norland in court? - Submitted by 10yearoldfan, 9 NOv 2013.
++ At about 34:40 on the DVD, we have a glimpse of an out-of-focus face in the gallery, on the right of the screen. It may be Leonard Nimoy, who played an unconvincing thug in #166 TCOT Shoplifter's Shoe. Or it may be another guy who was in the gallery for a few nearby episodes, including #166, who I contend -- with scant proof -- is Nimoy's brother Melvin. JohnK, 10 January 2018

Lt. Tragg (Ray Collins) did not appear despite his name being printed on the credits. Submitted by gracep, 1/26/2011.

TCOT Curious Coffee Set:On their gorgeous patio, the Norlands enjoy their morning coffee, served by a traditionally-uniformed maid from the Curious Coffee Set. Submitted by gracenote, 7/25/2011.
+ At 29:55 the cups and a glass carafe are in Della's possession in Perry's office and she mentions to Paul that the Professor was the one who drank up all the coffee. Submitted by catyron, May 4, 2918

CARS. It's about time for the new 1963 license plates to appear but all plates seen in this episode are still the '56-pattern yellow-plate and last frame of end-credits is stamped MCMLXII. "Automobiles Supplied by …" credit is to Ford but, as in so many episodes since the start of Season 3, the most impressively displayed car is a Buick:

Background Cars. Early in the episode, Lindley drives Janice back to Rayo's place to see if Rayo is really dead. After they park the Buick and are about to cross the street to Rayo's building (5:25):

I think that the Pontiac and Corvair whizzing by in the above scene is a nice example of Extra Effort to enhance Lindley's character-development: The characters were in a detailed conversation and car movement had to be coordinated with actor motion & dialogue. Any number of things could have gone wrong, requiring a re-take. I'm guessing that this detail was included to enhance Lindley's gentlemanly & protective nature, seen when he takes Janice's arm as they step off the curb and cross the street. Added by Gary Woloski, 8/14/13.

This is the first of three PM appearances for Patrice Wymore, who was married to Errol Flynn at the time of his death in 1959...MikeM. 3/2/2017

This is the second of two PM appearances for Harry von Zell, whose career in radio, film and television spanned almost fifty years. He is most remembered as the announcer/friend of George Burns and Gracie Allen...MikeM. 3/22/2018

The gibberish on the blackboard in the opening scene looks more appropriate for a calculus class than a law class. Submitted by Kilo 8/12/2018.
+ Similar to that in "The Day The Earth Stood Still" jfh Veterans Day, 2022

Nacho's Name: When the taxi driver played by Jose Gonzales Gonzales approaches the Puerto Verde hotel keeper, who is played by Nacho Galindo, he shouts out, "Hey, Nacho!" So Nacho's character name is ... Nacho. Submitted by catyron, July 23rd, 2021.
+ After the greeting, the hotel owner was introduced to Paul as "Juan Perez". jfh Veterans Day, 2022

This episode marks the second time that Dan Seymour (born Dan Seymour Katz) plays a Latin character (he also played Carlos Silva in “TCOT Impatient Partner,” #125). I don’t understand the casting; neither his appearance nor his accent convince the viewer. Given that Perry episodes often cast “authentic” actors for ethnic roles, Seymour’s casting seems all the stranger to me. Submitted by Ed Zoerner, 3/2/2011.
+ Well, Ed, maybe the parties involved thought Seymour looked “Latin” enough! It was a different time; and remember, they did present Frank Silvera as the father of Joan Banks in show #49. I remember actors who always seemed to get various ‘ethnic’ parts, regardless of what their actual origin was. I’ve seen Nehemiah Persoff play Italians, Poles and Latins. Michael Constantine comes to mind as well! Submitted by MikeReese, 12/20/2011
+ Does anyone know what the heck Seymour character Pedro Dias is eating during the courtroom (except when he is on the stand)? My wife says maybe peanuts or pepitos... HamBurger 07/17/2016

Perhaps the show is trying to be a little progressive; there appear to be more women enrolled the law class than one might expect in 1963. Submitted by gracenote, 7/25/2011.

Near the end, when Rennie bends over to pick up the locket, it sure looks like he is wearing velvet evening slippers.

Every story that involves “compromising photos” reminds me of the anecdote about the French diplomat presented with photos of him in flagrante delicto with his secretary. His response to the potential blackmailer was to order a full set of 8x10 glossies. DOD 01/24/22

Did you catch it? When Paul gives Mr. Hawes a cigarette, he pilfers the whole pack. Very slick. Submitted by gracenote, 7/25/2011.

I wonder about the thought processes of university-extension Professor Lindley. Two examples: 1) Janice visits the professor after class and tells him that she hit “Rayo” (per the subtitles on the 2011 Paramount DVD) over the head with a fireplace poker just before running away. She thinks that she killed him, but Lindley thinks that he may be only stunned so he tells her, “Janice, a few more minutes’ delay won’t make any difference.” Really? After a possibly fatal blow? Submitted by masonite, 11/30/2011.
+ I think what he means is that the time checking on the body won't make a difference in getting to the police to report the murder (if he was really dead). Submitted by Kilo 8/11/2018.

2) Lindley later calls on Vivian at her dance studio when he is looking for Rayo. Lindley doesn’t know either Vivian or Rayo, so doesn’t recognize Rayo, who is pretending to be a student of Vivian’s. Lindley tells Vivian, “When you see him, would you give him this, and tell him I’m very anxious to get in touch with him?” And “this” is a plain business card with text on only one side, the text being only “Edward Lindley, PhD. / Professor of Law.” So with only that info, how does Vivian know that he is “a professor from the university,” and how is Rayo supposed to get in touch with him? For starters, how many universities are there in the L.A. area? Submitted again by masonite, 11/30/2011.

The camera (similar to the popular Kodak Vigilant) used a wired remote to activate the 5 second delay shutter rather than a "radio-activated camera" stated in the Summary. Submitted by ace, 10/5/2012.
+ corrected by 10yearoldfan, 9 November 2013.
+ I believe the camera was a Polaroid Model 110a. Also, the photo had the wavey edges of Polaroid film of that era. Most likely it was Type 47 since that was 3000 speed film and would be usable without a flash indoors. Added by TerryS, 12/17/2018.