From The Perry Mason TV Show Book
Peter Breck returns to play Pete Warren, a man whose soon to be ex-wife, Myrna, is killing time in a Reno casino, waiting for their divorce to go through.

But when Myrna gets involved in a counterfeit gambling chip scam, Pete makes the mistake of lying to protect her. Then, when someone cashes in Myrna’s chips permanently, the suspicion falls on Pete, who, the authorities claim, manufactured the phony chips at his novelty company. It’s left to Perry to figure out just who’s not playing with a full deck. 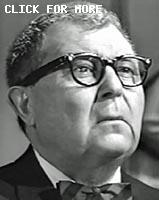 This is Ruta Lee’s fifth and final appearance on Perry, playing Irene Prentice. This is the only time that the last name of her character did not start with the letter “C.” The first four appearances, her characters were named, Cooper, Crest, Culver, and Cosgrove. Submitted by PaulDrake 33, 30 October 2009.

Jessie White makes his fourth of five appearances in this episode as Tony Cerro. When I was growing up, we knew him better as "The Maytag Repairman", who was always so lonely because Maytags were advertised to be so dependable...
dwhite 1.20.13
+ I like Jessie White in this one. He is tapped to play a savvy and important (if victimized) casino owner, rather than the nice-but-unsophisticated hash-slinger and bartender roles he usually gets. JohnK, 9 February

For the umpteenth time this season, Ray Collins does not appear as Lt. Tragg despite his billing. Submitted by gracenote, 5/2/2011.
+ see my comment re: Ray Collins in Opening Credits section for Episode 236 dwhite 1.20.13

Sightings: After Drake finishes a phone call and walks back to his table at the casino, Distinguished Gentleman #1 walks behind him. Later, the Gentleman turns up in the courtroom gallery, along with Little Old Lady #1 and a blurry Pencil Mustache Man. Read more about these favorite frequent faces. Submitted by gracenote, 5/2/2011.

This is the last of three PM episodes directed by Richard Donner who went on to fame and fortune as the director for such mega-movies as Superman, the Omen, and the Lethal Weapon series. Submitted by DickieC, 4/16/13

Reno, Nevada: For at least the second time Paul Drake went to "The Biggest Little City In The World" because of a Perry Mason case (#39 TCOT Rolling Bones). Submitted by H. Mason 4/30/15

Murder Method: Myrna Warren aka Mrs. Richard Ogden was at least the third person to be killed with a gun by being struck instead of shot (#83 and 182). Submitted by H. Mason 4/30/15

This is the second of four PM appearances for Bebe Kelly (Cocktail Waitress), who would have a recurring role as Nurse Clover on "Trapper John, M. D."...MikeM. 2/27/2017

In his phone call to Paul Drake from the murder scene, Perry manages to hold the phone in an odd way. His fingers appear to be wrapped around his tightly wound handkerchief, without touching the receiver at all. ..Bob61571, 3/5/2017
+ Perry holds the phone that way in order to avoid leaving his fingerprints on the receiver. jfh 29Jul2018.

The Case of the Substitute Coffee Set: The plastic West Bend Thermo Serv coffee carafe and a couple of matching cups are in use at Perry's office. Della no longer pours, nor is the coffee served on chinaware. Submitted by catyron, July 11th, 2018

The character Ned Beaumont was previously in Dashiell Hammett's 1931 novel "The Glass Key", and Beaumont's first scene (on page 1) is of him throwing dice in a gambling joint. Writer Jonathan Latimer worked on the screenplay for the 1942 movie version of "The Glass Key". Even though the 1942 and 1935 movie versions changed Beaumont's name to "Ed", I wonder if Latimer was attempting a homage to Hammett, who died in 1961. A less-silly story would have been better (why, for example, is Tony Cerro still alive?), though the double play of Ruta Lee and Myrna Fahey definitely chips in for enjoyment. Submitted by (lowercase, with a comma and period) masonite, 07/01/13.
+ Toss in the delectable Della and make it a trifecta. Submitted by DellaFan, 1-19-2014.

The two times Jacob Leonard showed the photograph to Peter he asked Mr. Warren if he knew "the dark-haired woman". Myrna was the only woman (and just about the only person) in the picture. He should have asked: "Do you know this woman?" Submitted by H. Mason 4/30/15

Myrna seems to be doing her best to channel Elizabeth Taylor ala “Butterfield 8”. DOD 04/12/21

In another of PM's many subtle attempts to break the color barrier, a black couple appears as customers in the casino. DOD 03/14/19

When Perry calls Paul from the dead woman's apartment, he sure seems to go out of his way to reveal a lot of information for the benefit of Leonard.

Sound Effect: The doorbell at Myrna's apartment was heard twice. There was a chime beside the door that should have made a different sound. Submitted by H. Mason 4/30/15

The killer's comments near the end of the court hearing: "I couldn't have that. I just couldn't have that", were similar to remarks made by the killer in # 100 TCOT Lavender Lipstick. Jonathan Latimer was credited with writing the teleplay for both stories. Submitted by H. Mason 5/1/15 \\There was no "wrap up" scene after the court room drama. Were there any more such episodes. Was this a fetv cut? Joe B. 12/30/21

In the Chips Integral to the plot, and discussed extensively - yet without detail - is the concept of counterfeiting casino chips. Nowadays there are probably any number of technologies to make this task difficult, but one wonders what methods were in use in 1964: copying the chips themselves would seem to be quite easy, so there must have been frequent changes in design and rotation of inventory ...almost nightly, I would think, would have been necessary. Pondered by Notcom, 073019.