From The Perry Mason TV Show Book (Revised)
When a man attempts to swindle his partner, fake his own suicide, and disappear, his plans go awry when someone really kills him. It’s up to Perry to defend the accused, the dead man’s partner (the “Boy Scientist” Brent) and to figure out who is the real murderer. 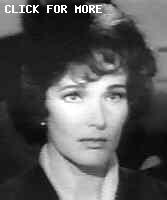 Anomaly: Maura McGiveney is listed as Gloria Winters but is called Miss Withers by Valerie (Julie Adams) in the opening scene. Submitted by Mitch English, 1/26/2005 via email.

Marvin Miller makes his only Perry appearance here playing attorney F. J. Weatherby. Marvin Miller is probably best known for playing the character who delivers the million dollar check each week, Michael J. Anthony, on the 1950s television show The Millionaire. He was also known as a prolific announcer on 40s radio. His famous voice was every where during the golden age of radio. Submitted by PaulDrake 33, 9 September 2009.

Cape Canaveral (where Brent was working in the space program) was renamed Cape Kennedy several months after this episode aired, in memory of the recently slain President. The residents of the Florida town, however, didn’t like the change, and it reverted to the original name in 1974. But the Space Center there is still named after Kennedy. Submitted by gracenote, 2/1/2011.

Sightings: Our only recurring spectator to turn up during the divorce hearing is “Miss Carmody”, in the back row behind Weatherby. At Brent’s hearing, however, both Pencil Mustache Man and Quiet Old Man #1 sit on the prosecutor’s side of the gallery. Can you spot other favorite frequent faces? Submitted by gracenote, 2/1/2011.
+ That might be a very blurry Little Old Lady in a Hat also on the prosecutor’s side (but only in one brief shot). Submitted by gracenote, 7/26/2011.

Uncredited Actors: Robert Wegner pops up as a bailiff, sitting quietly, out of focus, by the window. Submitted by gracenote, 7/26/2011.

Although Julie Adams played in a lot of B Westerns, she is best known as the girl in Creature from the Black Lagoon. Interestingly, in one of her 4 Perry Mason appearances, she is one of the rare Mason clients to be found guilty (“TCOT Deadly Verdict”)! Submitted by CGraul, 9/14/2011.
+ Murder mystery fans might be interested to know she had a recurring role as Eve Simpson, a real estate agent in Cabot Cove, Maine on Murder, She Wrote. Added by H. Mason 2/5/15

Carleton Carpenter, who played Peter Brent, was not only an actor, but a talented singer. In 1951, Carleton Carpenter teamed up with Debbie Reynolds to record the old tune "Aba Daba Honeymoon" in the movie "2 Weeks With Love". Their recording of that song made it all the way to #3 on the Billboard Chart in 1951. This is Mr. Carpenter's only appearance on TAGS. Submitted by PaulDrake 33. 11 December 2011.
+ TAGS?? What is TAGS?? OLEF641 6/1/21
> The Arthur Godfrey Show?? I , too, fail to see a connection. Notcom, 060121.

Just ONE CAR. Up at Roy Comstock's La Casita:

This is the first of two PM appearances for Richard Jaeckel, who was nominated in 1971 for an Oscar as Best Supporting Actor in "Sometimes a Great Notion"...MikeM. 3/10/2017

Believe it or Not! The rock group "Thin Lizzy" referenced this PM episode in their song "Suicide" with these lyrics: "Peter Brent combed his hair / And sent for the police / Policeman came, took Peter's name,". MeTV included this item in their article "10 Rock and Pop Songs that Were Surprisingly Inspired by Classic TV Shows" ....Bob 61571, 28 March 2018

Circular Pendant Mystery: Julie Adams as Valerie Comstock is seen wearing a large swinging medallion, circular pendant, or disc-shaped talisman. It seems to be inscribed with (at least) three very fancy, curlicue letters on it. The first letter is clearly a B. The second may be a C or J or U. The final letter is a C or a G. The character's last name, Comstock, does accord with a possibly third letter C, but the other letters do not form a part of her name. Ideas, anyone? Submitted by catyron, May 10, 2018

One of the better episodes because of the presence of Julie Adams, because of the original jazz music by Van Cleave (which gives the episode an edge), and because of the references to the space program. The last was particularly enjoyable because I have visited the Kennedy Space Center at Cape Canaveral (it looks a little different now). Submitted by gracenote, 2/1/2011.
+ That is the same establishing shot as was used in TCOT Misguided Missile, which was set at Vandenburg AFB in California. It even shows the same air policeman with his dog. Submitted by vgy7ujm on 6 June 2020.

Perry Mason’s badgering of a certain witness should have been stopped by the judge. Of course, there was a reason he was doing it, but it still flies in the face of court procedure. The judge did not have to ask Perry to let the witness testify after calming down; he could have told him. Submitted by gracenote, 2/1/2011.

Burger argues that Brent, having read the suicide note, uses that as cover for killing Comstock. If Brent really thought Comstock was going to kill himself anyway, what would he gain by committing murder? DOD 02/01/22

It’s nice to see Tragg in this episode, but why do we see him? He seems far out of his jurisdiction; the cabin is supposedly near El Centro, and that’s not close to Los Angeles County! Submitted by Ed Zoerner, 8/14/2011.
+ I don't know how far Tragg was from retirement, but this is the famous episode where he can be seen talking into his torch and not his walkie talkie. Submitted by pauloh1 22/11/14
++ LOL, it initially looked like that, but he actually has his walkie talkie in the same hand as his flashlight. Submitted by mesave31, 04/12/15.

Paradoxical Proposal: Per a newspaper article's headline before the body was found, at 19:55 on the 2011 Paramount DVD, "Comstock's Suicide May Be Accidental". At the least it's more enticing than "Comstock's Death: Suicide? Accident?" Julie Adams _is_ to die for, if not sooner than one expects. lowercase masonite, 3/3/16.

You Are Now Leaving...: Perry and Paul go to the hunting cabin "La Casita", at 27:17 on the 2011 Paramount DVD. The "La Casita" sign faces the cabin, not any road leading to the cabin -- perhaps so that the cabin's residents don't also have to hunt for the name of the place where they're staying. lowercase masonite, 3/3/16.

It's for you, Mr. Burger this time, Hamilton receives a phone call, he's tracked to Perry's office. jfh 02Dec2016

This case also does a good job of showing the professional respect Hamilton, Tragg, Drake and Mason have for each other outside of the courtroom, working together to find the truth. Submitted by cgraul, 9/14/2011.
+ Something similar happened near the end of episode 144 TCOT Mystified Miner. Lt. Tragg, Lt. Anderson, Sgt. Brice, Paul Drake and Perry worked together to find a missing person and apprehend a suspect. Added by H. Mason 2/5/15

The poetry Comstock recites at the bar is based on Andrew Marvel's love-poem "You." Mike Bedard 7.9.16

"Conte Unchained." Seemingly determined to prove that his scenery chewing in "TCOT Injured Innocent" (#133) was no accident, actor John Conte really lets loose here as the conniving Roy Comstock. It's hard to figure out whether Conte is hamming it up because he's a ham or because he's playing a hammy character (Comstock) who's putting on an obvious performance, but, either way, subtlety is not the order of the day. Submitted by BobH, 17 February 2018.
+Conte has the most reptilian non-smile. He’s always flashing those choppers. Submitted by Wick 2/1/2022

"A Contean Footnote." Among PM guest actors, John Conte might well be considered the anti-Parley Baer. Baer appeared in six PM episodes and always played an "innocent" suspect, never the victim, murderer, or defendant. Conte appeared in five PM episodes and never played an "innocent" suspect, always the victim (3 times), murderer (once), or defendant (once). Submitted by BobH, 17 February 2018.
+ "Contean Footnote No.2." John Conte was a fine vocalist earlier in his career. Check out his excellent 1942 rendition of "Everything I Love," a terrific, lesser known Cole Porter tune, on YouTube at www.youtube.com/watch?v=BAlX41P2WIs. Submitted by BobH, 2 August 2018.

Another episode with the end book on the shelf upside down. This time, it's on the shelf seen behind Hamilton's right shoulder in F. J. Weatherby's office. jfh 30Mar2018

Suicide: One's last words I have a problem with the plausibility of one of the elements of this show. No it isn't the histrionics of Julie Adams or (eventually) Richard Jaeckel; nor is it the badgering scene (see above) - or that - even in the more casual world of 1963 - Perry would have even been able to acquire some of the info with which to engage in it. No... that's all pretty par for the course on PM; it's that a person, whether they were writng a real suicide note, or merely a fake one, would ever sign their last name to it. Signed, Notcom 042719.
+ I noticed that too. Odd to write a suicide note to your secretary (?) and put your last name. As if she would have known several Roys who died right around the same time. —yelocab 15MAY19

Condescending Perry: Of Mrs. Comstock who colluded in her husband's fake suicide and who transferred out of the country all the settlement money she'd received in her contrived divorce: "Maybe she's not a crook; maybe she's just a woman." hmmm ... jfh 02Jan2020

The episode name, Lover's Leap, makes no sense to me. For one they were married (divorced) so lovers seems not quite right and where is the leap. I would like something like the Deadly Divorce. Submitted by Perry Baby 7/29/16.
+ Married couples can be lovers, however, this couple was not married; Comstock leapt overboard (he swam ashore) to fake his suicide (Roy says to Valerie, "I'm dead, remember? I took the leap!"). jfh 02Dec2016.
++ Was the divorce final yet? In these days, divorcing couples first got an interlocutory decree (shown at the beginning) and then after a waiting period (a year?) the couple returns to court to have the divorce declared final. If the divorce is never declared final, they are still married. —yelocab 15MAY19
+++ Community property was divided and the resulting individual assets were moved to Mexico in furtherance of their scheme. In addition, during the trial, Perry refers to Roy and Valerie Comstock as "the recently divorced couple". It seems that the divorce was final. jfh 15May2020.

As indeed we should all remember, for such is the very raison d'etre for the action in the series' second episode...at least until someone goes and gets themselves killed. Notcom, 051719.

Perhaps 'Lover's Leap' had to do with Willie's obvious puppy love/lust for Valerie Comstock, and her trading on it .. it's so clear, his feelings for her, and her manipulation of him for it (telling Willie to beat up her husband's attorney!) and it also being clear to anyone BUT him that she has no real affection for him .. ah, desire unrequited! Submitted by MikeReese, 3/11/17
\\

The title comes from the words of Willie (Richard Jaeckel) after he enters Valerie Comstock's beach house to tell her about the police finding the boat. "I guess they figured he took the leap alright" in saying that Roy Comstock committed suicide despite still being in love with her. Submitted by Kenmore 01/21/2022

The Name Game: Another story where the killer wasn't given a last name. Maybe Willie should share a cell with Buzzie (episode 57) and David (episode 95). Other stories with name problems are: episodes 13, 110, 130, and 140 where the first name of the murderer was never mentioned. In episodes 35, 93, and 141 initials (and no first names) were used. In #16 we're not sure if the name used after the killer's title was a first or last name. Finally in episode 165 the killer used an alias and the "real" name was never mentioned. Submitted by H. Mason 2/9/15