From The Perry Mason TV Show Book (Revised)
Sixties heartthrob David (The Man from U.N.C.L.E.) McCallum plays Phillipe, a Frenchman who has fallen for a married woman. She gets him to bankroll her separation from her violently abusive husband, but Phillipe learns later that the husband took the money to buy into a ski resort deal. Phillipe tries to confront the cad on the slopes but is unsuccessful, and despondently returns to Los Angeles. The husband is not so lucky: He’s killed when his plane crashes. Seems his blood was loaded with barbiturates. When the police suspect that the Frenchman doctored the coffee in the dead man’s thermos, Phillipe finally smartens up and gets Perry as his lawyer. 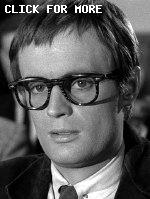 Jacques Bergerac makes his only Perry appearance here playing Armand Rovel. Mr. Bergerac made numerous television appearances in the 60s, usually playing a Frenchman, but he is probably best known for being the fourth husband of Ginger Rogers. Submitted by PaulDrake 33, 14 October 2009.

He made a brief appearance in “Gigi” as a gigolo ice skating instructor. DOD 02/18/21

Sightings: “Miss Carmody” appears at the airport infirmary as a nurse administering first aid to grieving widow Roxane Berard. Submitted by FredK, 20 Nov 2010.
+ In the courtroom gallery we find Distinguished Gentleman #1 sitting near the aisle, and Quiet Old Man #1 hiding in the back row on the other side. Submitted by gracenote, 3/11/2011.

It took a good number of viewings to spot Don Anderson in this episode, but he finally turned up among the guests at the ski lodge. Early on he's one of the small crowd who laugh as Armand throws Phillipe into a snowbank, then just before the final credits, he's in the background holding a pair of skis and chatting with an attractive gal as Perry, Della and the others rehash the plot points. Submitted by FredK 22 February 2013.

Jackie Coogan is better known as the wacky Uncle Fester from The Addams Family. Submitted by gracenote, 3/11/2011.
He may also be the only PM alum to have a law named after him. The highest paid and most heavily merchandised child star of the silent era, he earned the equivalent of about $40,000,000, virtually all of which was spent - legally - by his mother and stepfather. At age 21, he had to sue to get back some of the money he earned, eventually getting a bit over $100,000. In 1935, California passed a law, popularly called the Jackie Coogan Law, requiring a percentage of a minor’s earnings to be placed in trust. His first brief marriage was to a teenage Betty Grable. He also had a distinguished flying record in WWII. DOD 02/18/21

+ American Radio Archives at Thousand Oaks, CA holds a script ("Last Revision 11-14-63") showing that the also-wacky-character-actor Vito Scotti was apparently considered for the role of "Ron Litten" before Coogan was. See catalogue entry here. Scotti did appear in Ep#62 TCOT Howling Dog. You might catch both Vito and Jackie in "Art & the Addams Family" (S1,Ep14)☺ Added by Gary Woloski, 1/6/13.

CARS are all seen prior to 06:51 on the residential street outside the Rovel residence during Phillipe's two visits. Only Armand's taxi can be definitely linked to a character:

In this year 2014 I still find the surprize glimpse of the XKE in this episode stunning. Added by Gary Woloski, 10/15/14.
* Indicated by external bonnet-latches ("bonnet"="hood" in USA), see here. All later E-Types (even later '61s) had internal bonnet latches.

Murder Method: Armand Rovel was the second victim to die in a plane crash after being drugged (see episode 22 TCOT Fugitive Nurse). The same method was faked in episode 81 TCOT Frantic Flyer. Submitted by H. Mason 3/16/15

This is the only PM appearance for Janet Lake, who is married to former football player and coach Pepper Rodgers...MikeM. 1/5/2017

This is the only PM appearance for Roxane Berard, who may have acquired a French accent naturally. Wikipedia says Berard was born in Belgium. IMDB says she was born in Canada...MikeM. 1/5/2017
+ Let's split the difference and recognize her as the only Icelandic actress to appear on PM !! Seriously, though, this brief story supports the Belgian birth; but whether Belgique ou Québécois, Ms. Berard likely came by her accent naturally - as did the French-born Bergerac - which makes the complaint about "phony" accents (below) ironic...presumably McCallum was bad enough to overcome the realism of his co-stars. Notcom, 041417.
++ I think, in Berard's case, the problem is in the dialog she is given, a Hollywood scriptwriter's idea of a "Frenchified" cutsey way of speaking. And, perhaps, she had spoken English exclusively for a long time and was speaking English with an "Englishified" French accent? OLEF641 7/3/21

This is the only PM appearance for Don Collier, who played ranch foreman Sam Butler in the television series "The High Chaparral"...MikeM. 1/11/2018

Mr. McManus, the deceased manager of the lodge, is named after George McManus, the cartoonist who created BRINGING UP FATHER, a classic comic strip. ...28/02/2018 by Red Chief

This is the only PM appearance for Janet Lake, whose third husband is football player/coach/administrator Franklin "Pepper" Rodgers...MikeM. 4/25/2018

Location: Any idea where the snow scenes were filmed? I admit I was born in California and have lived here most of my life, but i have never been to a ski lodge, so this is unknown territory for me. The US Forest Service office had a nice logo, though: "Wood, Water, Forage, Wildlife, Recreation - US Forest Service, Department of Agriculture." : Submitted by catyron, June 3rd, 2018
+ All the “snow” scenes I saw look liked they were filmed on a studio set. DOD 02/18/21
++ The one where Armand punches out Phillippe certainly is, but one nice touch: instead of the usual fake snow they actually used crushed ice, which looks nice and realistic packed in behind Phillippe's glasses OLEF641 7/3/21

Continuity: When Ninette comes out to get her mail the windows she passes in front of have the blinds open. A second later they are closed. Kilo 9/11/2018.

Nice touch When Armand shoves Phillippe down into the snow, Phillippe looks up with snow caked behind his eyeglasses! jfh 18Jun2020
+ Was McCallum actually a heartthrob a few decades ago as the Summary describes? He’s kind of cute, but…. Submitted by gracenote, 3/11/2011.
++ I think so, Gracenote. I remember when he was on 'The Man From UNCLE' and the girls did indeed swoon over him. These were mostly pre-teen, or early teen aged girls, but he was VERY popular among that set. And he still has a following as Ducky on 'NCIS' Submitted by Rickapolis 09/26/2012
+++ Oh, Yes! As Illya Kuryakin, Napoleon Solo's sidekick on The Man from U.N.C.L.E, a part 180° removed from Phillippe, he was definitely on the A-list of heartthrobs of the mid-60's. My dad was a huge fan of the show so I can remember firsthand. I was too young to be truly swoony, but old enough to appreciate his charms. Sidenote: there is a main boulevard in Palm Springs that for years I thought was named for DM, but one of the early pioneers in the area had the same last name. OLEF641 7/3/21

McCallum was sometimes referred to as "the fifth Beatle" because he was so popular (and had a mop top like the Beatles did). Remember, in The Man From UNCLE he didn't wear glasses and play a hapless wimp, but a secret agent who could take care of himself. His popularity I think came as a surprise to the producers of the show, who thought he'd just be a minor character at first. He reminds me of Leonard Nimoy on Star Trek, whose popularity overshadowed that of the main star, William Shatner. Neither McCallum or Nimoy had that leading-man quality, but I think that helped endear them to a lot of people. Submitted by scarter, 3/30/2015
+ Another example that immediately comes to mind is Henry Winkler in Happy Days. Added by H. Mason 3/30/15

McCallum's cringeworthy "French" accent comes and goes throughout this episode, from sentence to sentence. Couldn't he have instead played, for example, a gormless Glaswegian? He could have met other characters in the bookstore. But he's still going strong, now with 220+ weekly episodes as Ducky. Also, a hearty hello to Coleen Gray, who turned 90 on October 23! Submitted by masonite, 12/4/12.

Hallmark Movie Channel has apparently restored commercials to the original break points. For a week or two, they had been cutting for commercials in mid-scene. Submitted by MikeM, 9/26/2012

Why is this episode TCOT Fifty Millionth Frenchman? Phillipe (and isn't Philippe a much more common French name?) tells Perry and Paul (around 35:27 on the 2012 Paramount DVD), "How could I admit that I am not like those 50 million other Frenchmen who know all about women?" Phillipe sounds more to me like the 50,000,001st Frenchman. lowercase masonite, 3/22/16.
+ The problem with the semantics is actually much worse than that: although the writers were presumably trying to allude to the 1930ish Play/movie (an allusion which must have been already a stretch in 1964, but is totally lost today) they overlooked the fact that while France has Fifty-Million Frenchmen - i.e. inhabitants - only half of them are men. But would the title TCOT Twenty-Five Millionth - or Twenty-Five Million and First - Frenchman have worked ??? Probably not. Submitted by Notcom, 033116.
++ The term "50 million Frenchmen" is taken from one of Sophie Tucker's better known "racy" (at least for the time) songs. DODay 1/11/18
+++ The song "Fifty Million Frenchmen" was a jazzy hit in 1926-27 for both Ted Lewis and Sophie Tucker, the play was a hit in 1929, and the movie was released in 1931.

Perry: I will do my best.

This is one of my least liked episodes. I found the phony French accents annoying. However, the show seems to have a more modern vibe in hair styles. It is getting well into the 60's now. Submitted by Perry Baby 9/21/16.
+ A grimly bad script and bad French accents make this a lame show. And look at the number of writers: "Teleplay by Robert C. Dennis, Jackson Gillis, and Samuel Newman' Story by Robert C. Dennis." That many names is generally a sign of a troubled plot and screenplay. Submitted by catyron, June 3rd, 2018
++ Did I say that #171/TCOT Two-Faced Turn-A-Bout was my least favorite episode? (I did.) I was incorrect. This is my least favorite episode, so bad that I completely blocked it from my mind! Ninette's cutesey cringeworthy dialog and David McCallum's hopeless miscasting AND badly written dialog are the low points of a mediocre script. OLEF641 7/3/21
> In the months ahead you may discover your mind has blocked more than you realized !! 😉 Notcom 070321

Divorce: Seems to me in several other episodes that Perry has said that he doesn't handle divorce cases. Kilo 9/11/2018.

After the crash, Andy shows to Perry an empty pill bottle (26:34 on the 2012 Paramount DVD). Why wouldn't Perry have mentioned the pill bottle to the DA, before the preliminary hearing, as a possible way to have had Armand ingest the barbiturates? I didn't see any proof during the hearing that the barbiturates had to have been in the coffee. lowercase masonite, 3/22/16.
+ As becomes clear during the episode, Ninette and Armand worked together to con Phillipe out of the $5000. During the trial, however (at 46:15 on the 2012 Paramount DVD), Perry called the con a badger game. Wikipedia's description of the badger game is here. I don't see how the chump Phillipe was involved in a badger game. Ninette convinced Phillipe to hand over the money apparently in return for a promise to marry him later. He could have sued for a "breach of promise" suit, I suppose, had such a suit been possible. Speaking of which, that suit is in the entertaining 1975 movie Love Among the Ruins, which takes place in the Edwardian era. lowercase masonite, 3/22/16.
++ I'm going to speculate here, and I think Perry's comments about the 'badger game' was his take on it, not necessarily what the Rovels' were up to. I wouldn't put it past the poisonous Ninette to use Armand's finding her and Phillipe together as a way of squeezing cash out of him, if it came to that. Oh, when a man doesn't think with his brains ... Submitted by MikeReese, 4/9/2016