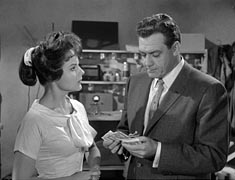 From The Perry Mason TV Show Book
A weird family affair—featuring switched identities, extortion, and $2 million—leads to a murder that even has Perry confused.

Sightings: A few favorite frequent faces show up in the courtroom gallery today: “Miss Carmody,” back row, prosecutor’s side; Little Old Lady #1, far corner, prosecutor's side; Distinguished Gentleman #1 near the Lady; and Quiet Old Man #1, in front of “Miss Carmody” and near the Gentleman. The Little Old Lady has on a different hat today, too—much darker than usual. Read more about them all here. Submitted by gracep, 11/17/201
+ We do also see, somewhat out of focus, "Sasha Magaloff". Submitted by Clothears, 12th April 2020

Uncredited Actors: Don Anderson joins our court as a spectator as Glamis is called to the stand. Bill767, 1/6/16.

Anomaly: Although only listed as “Autopsy Surgeon,” Michael Fox is, once again, Dr. Hoxie. Even Burger addresses him as such. Submitted by gracep, 11/17/2010

Early in the episode when Muriel tips over the flower vase in the hallway, Glamis asks her what she doing making so much noise "at this time of night". It's clearly morning as Carter left in the middle of breakfast, etc. jfh 11Feb2019
+ I think that is supposed to be a "clever" way to indicate that Glamis had been out ve-e-e-ery late the night before. OLEF641 3/16/21

When Perry's visiting Carter Gillman in jail, Perry has a lighted cigarette in his hand. The camera then moves to show a view of the back of Perry's head and right shoulder. In this view, Perry apparently blows cigarette smoke which rises above his head, but when the camera moves again in front of Perry, the cigarette is in his hand resting on the table. jfh 04Oct2018.

The Curious Coffee Set makes two appearances in this episode. First in the opening scene and later in Perry’s office. Submitted via email from Evelyn, posted by daveb, 7/24/2011.

Served: For the third time Perry was given a subpoena. It also happened in episodes 17 and 30. Submitted by H. Mason 11/10/14
+ And, once again, Ham Burger disrupts the proceeding with his usual bad-mouthing of Perry while demanding his motion takes precedence over everything else. How does this guy keep his job as the DA? Submitted by Arisia, 03/18/18

FAULT Fun though it is to squeeze Tragg into a scene, it makes little sense that he would be serving a subpoena: Courts - at least at the level we see in PM - are a county function...the logical server would be someone from the sheriff's office. Nitpicked by Notcom, 122616.
+ Tragg commented that he wasn't just there making a courtesy call. So, maybe he decided to serve Perry personally since, unlike Burger, Tragg is a friendly adversary. Perry and Tragg have a mutual respect for one another. Burger respects no one. Submitted by by Arisia, 03/18/18

Case Closed!: Just as in episode 87, TCOT Singing Skirt, Perry solved the murder just before he was to be seated on the witness stand. Submitted by H. Mason 11/10/14
+ I'm sure he was STILL called after the fact, at least in chambers. Burger never lets ANYTHING slide by him; ESPECIALLY a chance to have Perry disbarred or charged with misconduct ;-) . Submitted by Arisia, 03/18/18

This is the first of three PM appearances for Dick Whittinghill, who was a well-known radio personality in Los Angeles for several decades...MikeM. 12/23/2016

This is the first of seven PM appearances for Don Dubbins, the last three of which would be as Deputy District Attorney Vincent...MikeM. 9/22/2017

Joyce Mackenzie was only six and nine years older than the actresses playing her daughters. This was her only screen appearance after 1954. Submitted by vgy7ujm 20 May 2020

So does anyone know why Perry calls Carter Gilman Mr. Carter when he first talks to him? Submitted by HamBurger, 9/26/2021

This is one bizarre episode in that we never see the victim, nor do we meet one of the prime suspects. Posted by Kenmore, 12/14/2009.
+ Also in episode #1, TCOT Restless Redhead, murder victim Harry Merrill aka Lester Gladden was never shown. Added by H. Mason 11/10/14

Although he's frequently offered or handed beverages, this is one of the very few times Mason is seen actually drinking one; in this episode he enjoys a highball with Della. Submitted by francis, 4/19/12.
+ Ditto for Perry smoking cigarettes: we sometimes see Perry lighting or stubbing out a cigarette, and often holding one, but we actually see him smoking in this episode (although, see Anomaly). jfh 04Oct2018.

Paul's convertibles sure are snazzy, but it seems strange he would sit in a convertible, with the top down, in plain sight of everyone, while conducting an undercover operation (in this episode, staking out the Gilman house). Submitted by 65tosspowertrap, 10/3/2013.

Willis Bouchey really chews up the scenery in this episode as the Judge. He looks and sounds like he should be on the Supreme Court! He is my favorite Perry Mason judge. Submitted by 65tosspwertrap, 10/3/2013.

You just know that when an episode has characters named Glamis(!) Barlow, Hartley Elliott, and Cartman Jasper--as opposed to the more reasonable Elliott Hartley and Jasper Cartman--there's a good chance the episode is adapted from an ESG novel. (See Episode #241, TCOT Mischievous Doll, for another example of the misnamed members of the Jasper family.) Submitted by BobH, 2 July 2018.

Paul said he had to get a friend "stoned" to get information out of him about why Mrs. Gilman was being blackmailed. I'm thinking stoned had a different meaning back in 1961. (Or did it?) Kilo 12/23/2019.
+ "Stoned" used to be one of many euphemisms for drunk, but as marijuana use became more mainstream it was appropriated to specifically mean high on weed. OLEF641 3/14/21

It's inconceivable that someone (Muriell) could mistake red paint for blood. Kilo 12/23/2019.

I LOVE the befuddled look on Tragg's face when Perry tells him: "You'll find the sawdust and the red paint in the workshop behind the garage." Tragg has just barely said he has a search warrant, but not what it's for! OLEF641 3/16/21

Indeed, as noted above, not only do we never see (1) the victim, Vera Martell, but we also do not see many of the other people involved in the convoluted plot: (2) Stephen Barlow, (3) Phyllis Monroe, (4) G.W. Monroe, and (5) Joe Yemen (who might possibly have changed his name to G.W. Monroe). And poor Muriell has little to do, other than to provide one more duplicate daughter. Submitted by Fifty-Niner on 11 August 2011.

And, adding to the bizarreness mentioned above, the shot of the revealed killer's grasping, clutching hands. They seem to float, disembodied in space against a black background - wonder if they actually belonged to the actor who played that role? Submitted by MikeReese, 11/22/2013.
+ Actually, the hands are shown in the lap of the killer. jfh 11Feb2019