From The Perry Mason TV Show Book (Revised)
Peter (The Big Valley) Breck plays William Sherwood, an ex-boozehound struggling to stay on the wagon. He loses the battle one night when he sees not a pink elephant, but Ruth, his dead wife, walking with another man.

Later, Sherwood gets a spooky call from Ruth and agrees to meet her. When she doesn’t appear, Sherwood gets nervous and thirsty and is soon bombed. Outside the bar, he finds his wife in a car, and this time she’s really dead. He calls Perry for help, but the lawyer and Paul cannot find body or car. When the corpse turns up in her apartment and Sherwood’s fingerprints are all over her car, he’s the natural suspect.

Correction: Don Davis reports: “According to the actual epsiode, which I have just viewed, the corpse actually turns up at the bottom of a 130-foot ravine in a car rented by Vince Kabat. However, the defendant, William Sherwood, has indeed left bloody fingerprints all over the car, so that much is correct.” 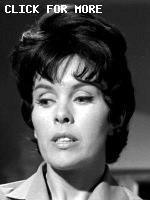 Syrian born Michael Ansara makes his only Perry appearance here playing Vince Kabat. Mr. Ansara was married to Barbara Eden (“TCOT Angry Mourner”) when he appeared in this episode. However, Ms. Eden appeared on Perry Mason before her marriage to Mr. Ansara. Michael Ansara had his greatest acting fame as Cochise on the 50s western, Broken Arrow. Submitted by PaulDrake 33, 14 October 2009.

Sightings: For at least a third time, Distinguished Gentleman #1 plays a spooky morgue attendant, once again turning up the sheet for an identification. Later, in the courtroom gallery, he and Quiet Old Man #1 appear as spectators. Read about them and all the other favorite frequent faces so diverting to spot. Submitted by gracenote, 3/20/2011.
+ At 16:28, my husband is pretty sure that Miss Carmody is the second secretary from the right, using an adding machine. Submitted by catyron, June 9th, 2018
+ + Rudolph “Rudy” Salinger (Distinguished Gentleman #1) has played morgue attendants, townsmen, waiters, and elevator operators. A couple of times his characters were named "Rudy," his actual name. Submitted by catyron, September 2nd, 2021.

In addition to playing the bailiff at the door (who helps nab the murderer at the end of the episode), Don Anderson has two other appearances here. In the opening scene, he passes by Bill Sherwood outside the hotel revolving door. Later, he's seen from behind sitting at the bar in Red's Reef as Sherwood banters with a waitress in the foreground. Submitted by FredK, 7 April 2011.

The restaurant where Paul and Perry have coffee between court sessions uses the ever-present Curious Coffee Set. Submitted by gracenote, 3/20/2011.

Although credited, we never see Lt. Tragg (Ray Collins) in this episode. The rest of the principal cast (except of coure for dear Gertie) is credited and appears. Submitted by gracenote, 3/20/2011.

Location: And look at all the traffic! Usually Perry arrives much earlier in the day. -Submitted by 10yearoldfan, 12 September 2014.

Hidden Clues: At 10:08, Perry peruses a newspaper account of the plane crash in which Ruth Sherwood supposedly died. Below the crash photos, we are shown the headline, "$200,000 LOOP ROBBERY," which also turns out to be central to the plot. -Submitted by 10yearoldfan, 12 September 2014.

More Thoughts on the Newspaper: I cannot find any record of a real newspaper named "Chicago Globe Star." The masthead font resembles that used by the Chicago Tribune but is not identical. The masthead does not show a date, and it is marked both "Extra" and "Final Edition." The text shown at 10:41 seems artificial. I suspect the page was laid out specifically for the episode. The airplane shows the number 421 on its tail. Perhaps it is a photo of Northwest Air Flight 421, which departed Chicago on 29 August 1948 and, horribly, crashed 100 miles southeast of Minneapolis. The plane in the photo resembles the real crashed plane, which was a Martin 2-0-2 like the one shown here. --Submitted by 10yearoldfan, 12 September 2014.
+"List of Accidents & Incidents Involving Airliners" identifies the Crash site as Fountain City, WI & the Cause as "Structural Failure" [google.com]. Mike Bedard 3.27.15

This is the third of three PM appearances for Bek Nelson, who was married twenty years to actor Don Gordon...MikeM. 1/16/2017

This is the first of two PM appearances for Cathleen Cordell, who played Pat Nixon in the 1979 TV mini-series "Blind Ambition"...MikeM. 5/28/2018

This is the only PM appearance for George Tobias, most famous to baby boomers as the long suffering neighbor, Abner "Abbbbnerrrrr" Kravitz on TV's "Bewitched". ....Bob61571, 6/20/2019

Love is Strange: Why would Dana go back to Sherwood after the way he treated her throughout the story? Submitted by H. Mason 3/30/15

As in the previous episode, there is a "gaslight" element here - manipulating events to make someone doubt his sanity. DOD 1/21/18

"A Fairly-Late-in-the-Game Winner." Perhaps the seventh season's best episode, even though "TCOT Deadly Verdict" (#185) is understandably more famous. This episode is a throwback to the more noirish and less legally convoluted episodes of the first two or three seasons, with its drunken protagonist who has possible memory problems, a possibly dead and probably deceitful wife, and supporting characters who are not at all what they appear to be. Toss in several very good performances (by Peter Breck, Richard Erdman, Michael Ansara, et al.) and the fact that the dreaded "staircase" set is nowhere in sight and you have a fairly-late-in-the-PM-game winner. Submitted by BobH, 27 January 2018.
+ Sorry. I have to disagree with your comment regarding Peter Brock's "very good performance". To me he overacts to the extreme whenever he has to show any emotion. Kilo, 9/17/2018.

I've noticed a lot of interior neon signs in this -- and other episodes. Inside the hotel, in this episode. IN another episode (with Adam West) a bookstore had several neon signs showing the various sections of the bookstore. --yelocab 01JUL19

Questions: Did anything happen to Maggi for not revealing that Ruth was still alive? Did Bill Sherwood have to return the insurance money since Ruth did not die in the plane crash? Submitted by H. Mason 3/30/15
+ Ruth did eventually die, so the insurance money woulld be paid out, Sherwood was not the murderer so he would still be the beneficiary. jfh 28May2018

As for Maggie, keep watching for TCOT Disquieted Dressmaker. If I were running the insurance company I would ask for the money back -- $15,000 (per 11:10 of the 2012 Paramount DVD), which has "the same buying power" as $114,000 in 2016. Surely the insurance company would have tried for more-positive identification of the burned body than the beneficiary's say-so, especially for all that money. At the least, would have used dental records. lowercase masonite 3/30/16.
+ Dental records are only useable if the deceased had visited a dentist ante-mortem, if that dentist is known, and there are extant pre-existing records for comparison. jfh 28May2018
I assume that the husband could be trusted to identify his own wife--considering the other supporting facts: the ticket in her name, the luggage. If one were planning insurance fraud, hoping for a plane crash seems an impractical plan. --yelocab 01JUL19
I think Sherwood could make a good case for keeping the $15,000 - he acted in good faith and the insurance company did not use due diligence, as noted above. I do wonder if there is a case against Maggi. She knew her sister was alive- if she knew about the insurance payment, would she have any legal obligation to speak out? Many interesting legal points here. DOD 1/21/18

Edie was fleeing Chicago to both run off with the $200,000 and to escape her accomplice. Her ultimate destination was Los Angeles, so why did she want to first fly from Chicago to St. Louis? Why not a nonstop to LA? Per Kabat's testimony (39:49), "There were policeman all over the Chicago airport." I assume that Edie could have changed her appearance and used an alias to flee, rather than risk essentially handing over the $200,000 to a stranger. And if Ruth didn't want her husband to find her, then why return to, and stay in, LA? Especially when she found out that Edie wasn't going to reclaim her luggage from her. lowercase masonite, 3/30/16.
So many good questions. Edie was only going to St. Louis because she got Ruth's ticket. She may have had her own ticket to LA--whihc she gave to Ruth(?). Also, Going to STL would have helped confused her trip to her accomplice. Maybe they planned to meet up later to exchange luggage (but why give your luggage with $200,000 in it to a stranger?) And there still would have been a record of Edie having a ticket to LA, which her accomplice could have discovered. --yelocab 01JUL19

And just how did Edie plan to retrieve the loot? The ticket switch really doesn't make sense, but does get the plot rolling.

I found Maggie to be one of the least likable characters in a PM episode. Her snide, haughty assessment of her former brother-in-law was one thing, but knowingly participating in covering up her sister's survival was a nasty bit of abuse. She didn't get her hands on the bank loot, but I wouldn't have put it past her character to use it if her sister had given it to her ... or let on that she had it! -- MikeReese, 1/29/2021