From The Perry Mason TV Show Book
Because of her husband’s recent demise, Lucille Forrest is the richest widow in Forrest Junction, California. Unfortunately, shortly before she became a widow, Lucille’s son was killed in what appeared to have been a hunting accident. Although Lucille is convinced her son was murdered, a provision in her husband’s will forbids her from investigating the death.

She goes to Perry for help. He has Paul investigate the matter, but this quickly ends when Ralph Day, a newspaperman Lucille suspects of killing her son, dies himself. Already suffering from a bleeding ulcer (typical for newspapermen), Day bled to death because his system was full of rattlesnake venom. When the police learn that Lucille was using the venom as a folk cure for her own ailments, they arrest her for murder. 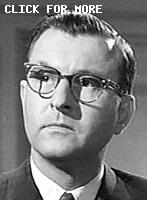 Despite the billing in the credits, Noah Beery did not appear in this episode. Noah Beery, the silent film star died in 1946 long before this episode was filmed. The actor appearing in this episode was his son, Noah Beery, Jr., who also appeared in episode #248, “TCOT Hasty Honeymooner.” Noah Beery, Jr. was probably best known for playing James Garner’s father, Rocky Rockford, in the 1970s action television show, The Rockford Files. Submitted by PaulDrake 33, 30 September 2009.
+ Noah appeared in another COURTROOM CLASSIC, "Inherit The Wind," as farmer John Stebbins (1960). Mike Bedard 2.13.15.
++ Typically, men drop "Jr" when the "Sr" dies. jfh 29May2017.

Frances Reid makes the final of three appearances here on Perry playing Lucille Forrest. This episode was broadcast in January 1965, and on November 18, 1965, Ms. Reid would make her initial appearance on the daytime drama Days Of Our Lives, playing the grandmother Alice Horton, with McDonald Carey as her husband. Ms. Reid was only 50 at the time, and today she is still playing the role at the age of 95. Submitted by PaulDrake 33, 27 October 2009.
+ Ms. Reid died February, 2010. Submitted by cgraul, 11/28/2011.
++ Frances Reid was in only 2 PM episodes, this one and TCO-Constant Doyle. Submitted by HamBurger 6/28/2020

Sightings: In the back of courtroom gallery, Distinguished Gentleman #1 watches the proceedings with great interest. Pencil Mustache Man and Quiet Old Man #1 are there, too, if you look carefully enough. Don Anderson made it, too; he’s right next to the Gentleman. Submitted by gracenote, 4/21/2011.

TR4 License Plate: DEM 265 was on the Triumph at the area near the railroad station and later at Mrs. Forrest's ranch . It was difficult to read, but a different plate with the numbers 518 could be seen on the car as it drove down the road. The plate DEM 265 was on different cars in #188, 192, 203 and 227. Submitted by H. Mason 4/20/15
+ The explanation is simple - it was the same car - even though at the station it was Lucille's car, newly taken out of storage from when she was off in "Europe"; and at the ranch it was Mirna's car, which Lucille comments on, saying, " I would like to have a car like that for myself". It would seem that the scene at the ranch was shot first, at ŕ back lot someplace; and later on in the shooting, a car was needed for Lucille to drive home from the station, and the Triumph was used, because it was available, and even though it broke continuity. Submitted by Cspoleta 5/09/2016

Actor Frank Ferguson was in episode 167 TCOT Bluffing Blast as sheriff. That story included a 7 year old hunting death (murder) where the deceased was believed to have killed himself with his own gun. Submitted by H. Mason 4/20/15

This is the only PM appearance for Carole Wells, who attended Hollywood High School and is an opera singer...MIkeM. 2/14/2017

And in the background we see that door with three decorative panels that appears so often, usually as the entrance to a ‘swank’ apartment. DOD 03/03/21

Mort Mills, as the sergeant, was almost always placed in a strangely ambiguous jurisdiction that covers murders committed outside of Los Angeles that are tried in Los Angeles. By the way, i like his ears. He has excellent ly shaped pointy ears. Submitted by catyron, June 30, 2018

Wow! I think this might become my new favorite episode! The acting, the plotting, the incidental music—it just all came together so well. Submitted by gracenote, 4/21/2011.

Agree. As with the previous episode, Thermal Thief, there is a tight, logical plot with none of those “What the...?” moments so common. I do think, as with many episodes, it would have been improved with more straightforward dialog. DOD 03/30/21

TIME TUNNEL Perspective: Ironically & Coincidentally, Original Viewers of "The Golden VENOM" may have listened to the #3 Song on January 21, 1965: "Love POTION Number Nine" by The Searchers [takemeback.to site]. Mike Bedard 4.28.15

The long arm of the law It seems surprising that the writers decided to place the trial in Los Angeles: although the location of Forrest Junction is never made explicit - and admittedly LA County is large - most of the details imply a remote location...maybe Paul Fix wasn't available that day?? Submitted by Notcom, 051316.

A memorable episode if only for the line, "He's always pooping somebody's party". The reunion of 'Walter Coffee' and 'Lucille Forrest' is another one of those charming 'You two love each other, everyone knows it' moments I like in PM stories. It's so obvious when they meet at the beginning of the story, especially on 'Walter's' part .. Submitted by MikeReese, 5/29/2107.

Blackmail 101: Another story where a blackmailer was killed by the payer. Don't they know there should be a letter or documents with important information in the hands of another person ready to mail to authorities in case of death and the person paying should know it exists. Submitted by H. Mason 4/20/15