From The Perry Mason TV Show Book (Revised)
Perry is approached by a young woman named Dorrie Ambler who wants him to verify her identity. A seedy private eye has been paying her to frequent certain places around town and Dorrie thinks it’s because she resembles someone else. Paul learns that this is true: Dorrie looks like a spoiled heiress named Minerva Minden. After some checking, Perry discovers that Minerva was supposedly involved in a hit-and-run accident, and it looks as though Dorrie is being used to prove that. But why?

Blackmail. At least that’s what it looks like. But when the blackmailing private eye is killed, Perry learns the truth. Dorrie Ambler is Minerva Minden. She wasn’t hired by the dead man, she was being blackmailed by him. The question is: Who is the dead woman burned beyond recognition in the car accident but identified as Dorrie Ambler? 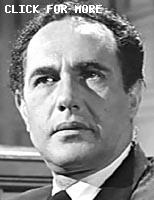 Ray Collins, Adieu (Pt. 1): This is the final episode of season 8. It also marks the final appearance of Ray Bidwell Collins as Lt. Arthur Tragg. Sadly, Mr. Collins would die during the summer of 1965 from emphysema. This episode also marks the final appearance of Wesley Lau as Lt. Andy Anderson. Submitted by PaulDrake 33, 8 August 2009.
+ Oh, the curse of ever-expanding commercial breaks! In a well-used syndication print, Ray Collins does not appear in this episode. So for many viewers, alas, this is but the last of several episodes in which he merely received billing. (See below.) Submitted by gracenote, 5/9/2011; updated 6/10/2011.
++ FredK may be right that the man was intended to be a stunt double. In any case, it clearly is someone other than Tragg who gets out of the car. Submitted by gracenote, 2/12/12.
+++ In resolution of the above disagreement: Ray Collins does not appear in Ep 241 TCOT Mischievous Doll. The scene described above with Tragg at the desk advising Anderson to "make Perry Mason your chief suspect" does indeed appear in Ep 196 TCOT Capering Camera from Season 7. This was, on 16 January 1964, Ray Collins' final appearance on screen. He was, however, included in the credits throughout the rest of Season 7 and all of Season 8. He died, as mentioned above, on 11 July 1965, during the summer hiatus between seasons 8 and 9 of the show.
dwhite 1.22.13

Uncredited Actors: Don Anderson makes two appearances in this episode. First, he’s part of a couple who observe Dorrie/Minerva shooting a pistol at the airport. Later he’s a spectator in the courtroom gallery on Burger’s side. Submitted by FredK, 21 April 2011.
+ The scowling cop standing by a car as Perry and Lt. Anderson talk is Robert Wegner, to whom this wiki has a page dedicated. Submitted by gracenote, 5/6/2011.

Character Names: We learn from Burger that Jasper’s first name, omitted from the credits, is Clyde. Submitted by gracenote, 5/6/2011.

Sightings: Among the horrified bystanders at the airport is Distinguished Gentleman #1, who confers with Don Anderson (see Uncredited Actors, above) among other fellow witnesses (behind Paul Drake). Having recovered from his shock, the Gentleman proceeds to play the court reporter during the evidentiary hearing, while a Pencil Mustache Man observes from an aisle seat behind Perry. Little Old Lady #1 and Quiet Old Man #1 also turn up—the latter magically teleporting between a seat behind the defendant and a seat behind Burger. Submitted by gracenote, 5/6/2011.
+ Is our versatile Miss Carmody seen letting Perry into Minerva's jail cell? Submitted by Clothears 10th Sept 2020
++ To find out who these people are, see the page appropriately called Who Is That?

This the first of two PM episodes for Mary Mitchel (Dorrie Ambler/Minerva Minden), who appeared as character Evelyn Boothby in two episodes of "Leave It To Beaver"...MikeM. 3/3/2017
+ Ironically (given the plot of this episode) the first of the two LITB episodes, The Chauffeur, is concerned with Wally's reluctance to be driven around by Evelyn...her driving skills seem to have deteriorated in the intervening few years. Notcom, 081520.

This is the only PM appearance for Allyson Ames (Rita Jasper), who was the third wife (of five) for producer/writer/director Leslie Stevens...MikeM. 3/9/2018

This is the third of three PM appearances for Paul Lambert (Del Compton), who started on the stage before turning to movies and television. Paul Lambert had a recurring role as Tom Dalessio in the single season television series "Executive Suite". Paul Lambert passed away in Santa Monica CA in 1997, aged 74...MikeM. 7/13/2018

The 7th out of 8 appearances by William Boyett, who mostly played police officers during his long career. For MST3K fans, Boyett is the police officer in the short "Last Clear Chance". However, he is also known for his solid performance in "The Hidden" where on this rare occasion he did not play a police officer. Submitted by Kenmore 03/08/2021.

This is the last episode of the TV series to be based on an ESG novel (and not a remake). Between 1963 and 1965, ESG published 7 Perry Mason novels that never were adapted for the show. I don't think it was a mandatory time lapse between the book and the adaptation. Look at Deadly Toy, published and filmed in 1959. So why didn't these 7 make it to the small screen? Musings by Bill-W2XOY on 08/01/2013..

More musings. Why did Wesley Lau leave after Season 8? Did he want more money? Did he want opening credits after the death of Ray Collins? I've never seen an answer to this. Submitted by Bill-W2XOY on 08/02/2013.
+ Wesley may have left to play Master Sergeant Jiggs on "Time Tunnel"'s lone 1966-67 season. He was in 5 of its 30 episodes: 4 airing in '66 & 1 in '67. Mike Bedard 2.5.15.
++ Wesley Lau degenerated throughout the course of this role. Lt. Tragg started out harsh and gradually became twinkly, ironic, and even lovable. Lt. Anderson started out warm and friendly, as Tragg's assistant, but once Ray Collins left, Lau became meaner, colder, and more angry, until all sympathy for him evaporated from my heart. His lines didn't change, and could have been delivered with calmness or friendliness, but he bit off every word until the way he spoke marked him as an obstructionist and opponent. I wanted to like him, but he soured on me. Submitted by catyron, July 15th, 2018
+++ Well said, catyron. Lau's character missed the mark for me as well. Not sure if it was his acting style or the writing...probably some of both. Aside from a few exceptions (most notably #158 COT Hateful Hero), Lau never seemed to have much chemistry with the other cast members. Richard Anderson/Steve Drumm was a much more effective replacement in my opinion. Third_Generation_Fan 1/16/2021
++++ I think we're being a bit unfair to Wesley Lau here. The ultimate director of how a part is played is the, um, director. And, I suspect, the producer (called the show runner now) is the final arbiter of the direction characters go over the course of a series, since multiple directors are used. I would not be surprised if Lau's contract was up and that perhaps the separation was a mutual agreement. I obviously don't have the same poor opinion of the character "Andy" Anderson as the above commentators, but I will grant you that he did seem to grow more wooden as the show went on. OLEF641 8/31/21

Did Lee Harvey Oswald read this ESG novel in December 1962 in the Saturday Evening Post, or in February 1963 when William Morrow and Company published it in book form? The word "patsy" appears eight times in the novel and "fall guy" appears three times. LHO famously said after his arrest that he was just a "patsy." Volumes have been written about how there may have been two or more "Oswald"s. LHO needed an attorney like PM to solve this circumstantial case. Unfortunately, Jack Ruby ended any possibility of a trial. Jack Ruby got flamboyant attorney Melvin Belli to help with his case. He was convicted, but the conviction was thrown out and a new trial ordered at a different venue. Ruby died "unconvicted" before the new trial could take place. In the PM television movies series, PM defends a man accused of killing another on live television...MikeM. 3/3/2017
+ Erle Stanley Gardner dedicated his 1958 PM novel, The Case of the Calendar Girl, to Dr. Hubert Winston Smith, physician and lawyer, who in 1964 replaced Percy Foreman who had replaced Melvin Belli as lead attorney for Jack Ruby...MikeM. 4/29/2018

In the opening scene the cab pulls in behind a parked Chrysler. When Dorrie exits the cab, the Chrysler is gone.
Judging by the puckered stitching at the shoulders, Perry needs a new tailor. Why did Minerva need to involve a detective in the first place? DOD 03/25/20

As Dorrie dashes into Perry's office at the beginning of the episode, there is a different arrangement of the lettering on the office door -- "AT LAW" is all on one line. Have we seen this before? OLEF641 8/31/21

A Pitkin by Any Other (First) Name. In the original ESG novel, Clyde Jasper's first name is Dunleavey. Might he be related to the equally inaptly named Cartman Jasper from "TCOT Duplicate Daughter" (Episode #121)? Submitted by BobH, 2 July 2018.
+ "Jasper" was the first name for the similarly dim-witted brother in TCOT Fandancer's Horse. (An episode which, ironically, featured actress Minerva Urecal). Having never met even one person named - first or last - Jasper in my half-century plus, I'll have to conclude that either the name was a lot more common in the past, or ESG was rather fond of it (perhaps he had a spinner for names as well as plots ??) Oberved by Notcom, 080319.

Dry Lightning Strikes Twice Honestly !! Has there ever been an episode where Perry was made to look as stupid as this one ?? Sure there've been times when he was made the chump...and he was the first to admit it. Here he wanders around with all the earnestness of an overweight Clouseau, never suspecting until the very end that two people who look, talk and act exactly alike might be...you know... the same person. I'm tempted to think this was meant as a self-parody, but if so it didn't work. So here we were at the end of Season Eight, two of the last three episodes are among the worst the show has produced...might it be time to adjourn ?? We know what the producers ultimately decided. Notcom, 080319.

Season 8 concluded with two episodes featuring very questionable crime-scene work (aside from the also very questionable intelligence of Perry's clients.) In Wrongful Writ, the DA's office failed to establish where, exactly, the crime took place before the preliminary hearing began. And now, for Mischievous Doll, Lt. Anderson and colleagues misidentified a body "burned almost beyond recognition" by using only a partial fingerprint and hair color. Why couldn't they use dental records? No one even mentioned them. One consolation (besides Sgt. Brice getting a closeup and several lines to speak) could be that at least Perry's last client was willing and easily able to pay his fees. Submitted by (lowercase, with a comma and period) masonite, 07/03/13.
+ To quote Andy: "The laboratory was able to reconstruct fingerprints (my emphasis) . . ." Note, not "a partial fingerprint" . . . however . . . this does not explain the part where Perry projects the two prints on the screen for Andy to identify. That I can't understand. As for dental records, you would have to have a good idea of who your victim was in the first place, have some way of knowing who their dentist (if they even had one) was in the second place -- and remember, Dorrie is not a real person! OLEF641 8/31/21