From The Perry Mason TV Show Book (Revised)
Bill Williams makes his final appearance on Perry Mason playing a losing football coach named Burt Payne. Burt and his wife, Ellen, own the Wildcats professional football team. Burt wants to sell his 10 percent ownership to a group of investors and even gets a down payment from them. However, Burt needs his wife’s approval, and she is not interested. After Ellen meets with one of the buyers aboard a train, Burt is apparently killed in an explosion.

The episode climaxes with a chase scene filmed at the Los Angeles Coliseum. Perry actually runs as he and Paul pursue a shadowy figure who provides the key to the case.

Youngish members of the L.A. Rams, including well-known quarterback Roman Gabriel, appear as themselves throughout the episode. Character actor Karl Swenson wins the award for “Worst Imitation of an Eastern European Accent in a Dramatic Series.” 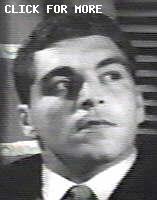 At 25 (in addition to the principal cast), this episode has the largest credited cast size of the series. Submitted by daveb, 5/1/2007.
+ Crazy Credits bloating the cast total, of course, was a sizable portion of the LA Rams roster (see below). Curiously, tho, rather than being given names, or simply described at "Football Player", they were listed as "playing [them]self"...a non-sequitur given that they were players on a fictitious team. Notcom, 081519.

Near the end of the episode, Lt. Drumm stands at one of the exit tunnels watching Perry and Paul as the crowd files past him. Don Anderson, with his familiar hairstyle and the thick-rimmed spectacles he often wore in the later episodes, is just barely recognizable among the football fans. Submitted by FredK 21 April 2012.

Richard Anderson appeared in 26 original Perrys (as Lt. Drumm, a state senate candidate & a corporate VP), "The New Perry Mason: TCOT Telltale Trunk," "PERRY MASON RETURNS," 5 Ironsides, 7 FBIs & a Wild, Wild West [IMDb]. Mike Bedard 2.14.15.
+ This is funny, and I just noticed after all these years: Lt. Andy Anderson was replaced by Lt. Drumm for the final season, who is played by Richard Anderson OLEF641 9/10/21

Sightings: I spotted Miss Carmody in the court (back row) and also the young brunette (front row near end). Perry Baby 12/15/13

It sounded like "Receptionist" Sue England was also the operator's voice at the beginning of 12th Wildcat. She was in 5 Perrys & voiced a "Female Robot"/"Space Control Officer" in "Lost In Space" & a "Woman's Voice" in "The Death Watch" episode of "Voyage To The Bottom Of The Sea" (Uncredited) [IMDb]. Mike Bedard 2.18.l5.

There's something unusual about today's title....give up??
It's the only one of the 271 in which the subject is Perry himself; (Paul and Hamilton were also subjects of other titles, but Della was never so honored.) Oberved by Notcom, 060916.

This cameo is the only PM appearance for LA Rams quarterback Roman Gabriel. He would later play Lt. Holloway in one episode of "Ironside"...MikeM. 3/15/2017

The Train: The Southern Pacific Daylight is the train shown running from Salinas to Glendale, and the shots do seem to correspond to the landscape at the places mentioned. This route is now the Amtrak Coast Starlight. Submitted by catyron, July 23rd, 2018
+ As 'catyron' noted, the train shown is properly lettered for the SP, and the station stops the conductor calls out correspond to the Coast Route; tho since it's already dark in Salinas, it would seem more likely to be an overnight train like the Lark...at least if they were travelling on a scheduled train: but it's clearly labeled as a "special", so the whole routine of calling out stops - or even having any - makes little sense. Nitpicked - reluctantly - by Notcom , 081519.
++ I don't think the train is a true "Special". At about 7 minutes in, after Ellen asks Casey where Burt is, he says "I can make myself take it when he books train . . reservations . . at the last minute". Arrangements for a true Special must be made well in advance, and the cost likely would have been out of reach anyway. The nice thing about a train is that extra cars can be easily added, so I'm guessing the "Special" was the regular train with a couple of banners slapped onto the cars occupied by the Wildcats. OLEF641 9/10/21

This is the second of two PM appearances for Regis Toomey (Andy Grant), whose career in films and television lasted more than fifty years. Toomey was memorably cast as LAPD Sergeant Les Hart on the ABC series "Burke's Law". Regis Toomey married in 1925 and outlived his wife by ten years, passing in 1991 at the age of 93...MikeM. 7/25/2018

There's a great shot of Fremont Street in Vegas --- before the canopy over the street was installed. jfh 25Jul2018.

When her husband falls down drunk, Ellen asks the team to do what you should never do from someone with a drinking problem, namely, clean him up and put him to bed. Then to compound the problem, she asks the coach to give him tranquilizers as they carry him to his berth. What were people thinking? Submitted by gracenote, 5/19/2011.

How did Burt come into ownership of 10% of the team?
Drumm pronounces Los Angeles with the rather affected hard “G”. DOD 04/28/21
The Summary claims that “Perry actually runs as he and Paul chase a shadoway figure,“ but in fact that is probably Lee Miller, Burr’s stand-in, who jumps out of the bushes. It’s kind of confusing because it appears to be Sgt. Brice who is doing the chasing at first, and then it becomes Perry Mason. Submitted by graceote, 5/19/2011.
+ Paul also runs and it actually appears as if it's actually William Hopper doing his own running --- and doing a mighty fine job of it! jfh 25Jul2018.

Speaking of Sgt. Brice, the producers gave Lee Miller a little tribute in this episode. In a moment unrelated to anything in the script, Sgt. Brice drops by the table in Clay's Grill where Perry, Paul and Della are sitting and flirts a bit with Della. A brief and most charming gesture. Submitted by francis, 3/28/13.

In the opening scene I expected to hear the conductor call out "Anaheim, Azusa, and Cu----camonga!"
Like the Brent Building, Mr. Skeen’s building is an architectural oddity - balconies on the inside, but not the outside!
Perry flew to Oxnard? DOD 04/14/20

When Hamilton and Perry drink coffee, Hamilton says he needs sugar. He grabs a packet, but sips the coffee again without ever adding the sugar. Otto Gervaert, 4/28/21.

The Wildcats will play before a very large crowd in the Los Angeles Memorial Coliseum. Earlier, their return trip to LA started from somewhere north of Salinas (like San Francisco?). Given their prosperity and evident length of the trip, why did they go by train rather than by plane? This was of course necessary for a nifty if far-fetched plot contrivance, and it reminded me of "Double Indemnity" -- "He'll have to go by train." Submitted by (lowercase, with a comma and period) masonite, 07/07/13.
+ Early on in the episode the Coach Banks mentions to Mrs. Payne that Burt Payne had made the decision to take the train instead of a plane. This would have been in his purview as team manager and makes sense when we find out what really happened. Submitted by Neil Van Zile, 07/03/14
++ Trying to think like a writer, I'm guessing that if they had taken a plane rather than a train, they would all have been belted in, or at least seated, and the trip would have been shorter, without all that time for mischief, hopping on and off, etc. Also the viewer would have been denied the classic train montage. JohnK, 21 March 2018
+++ Looks like the Wildcats attracted a sellout crowd for their game! And, that crowd really knew how to clear out of the area so quickly after the game's conclusion. Paul Drake's chase scene showed so few people around that end of the LA Memorial Coliseum grounds. Bob61571, 21 March 2018
++++ Ha! Good point, Bob61571
+++++ For comments on plane vs train, see below Spoiler banner OLEF641 9/10/21

'It's for you, Perry:''' Della reaches Perry in Hamilton's office saying, "We have our man." who is, of course, Barbara Hale's husband, Bill Williams. jfh 02Apr2019

This episode, as in #241 Mischievous Doll, depends on how the Los Angeles police identify a burned body. However, unlike #241, this episode's body is not the remains of a comparative nobody but of a co-owner of a major professional football team. Given the notoriety, why aren't the police more careful and thorough in their identification? Submitted by (lowercase, with a comma and period) masonite, 07/07/13.
+ The identification, you might recall, was based on a number of factors - the presence of personal effects, the statements of witnesses, and (presumably) a physical resemblance of the remains to Burt - which in real life would be accurate 999,999 times out of a million; so whether/not they would - or more importantly whether/not they should go further, is debatable. Of course in this perryllel world, the absurd, one-in-a-million can be counted on to happen. Defended by Notcom, 060916.
++ Also, on the moving train, there were a limited number of people, of whom only two were unaccounted for, the remains were pretty badly destroyed, and it was the supposed victim's room. Had this happened somewhere like a hotel, where the "victim pool" was unbounded, they might have felt it was important to be more thorough. olef641 - June 27, 2017

Perry's theory for how the fire started could easily have been checked by examining the train compartment.

"The Birlstone Gambit." The solution to the crime is a variation on what has come to be known as "The Birlstone Gambit," for its original use in one of Sir Arthur Conan Doyle's more famous Holmes stories. Ellery Queen employed it in several EQ and Drury Lane novels in the 1930s, as did ESG in "The Case of the One-Eyed Witness." Unfortunately, the gambit has become such a staple of whodunit fiction that it no longer manages to surprise mystery buffs. Submitted by BobH, 20 February 2017

Plane vs Train - Burt needed the trip to be by train for his scheme for disappearing to work: long journey with several stops and private compartments. It was obviously an intricate plan: train instead of plane, ordering the chemical in his wife's name, having Judson Warner join the train at a later stop (Salinas) with a large amount of cash, making arrangements to have a rental car waiting in Glendale, tickets on the ship. All these details would normally have been put together for us in the epilogue, so it wasn't as clear as usual. Even Burt's "patsy" was a good choice; Warner was also a gambler heavily in debt with a good reason for disappearing with a large amount of cash. Just in case it wasn't clear: Judson was the body in the compartment. BTW, I object to someone so malign (Burt) being named after my father ;-) OLEF641 9/10/21

"Where Did You Get That Hat? Where Did You Get That Plot?" After Jud Warner's body was identified and his estate was settled, his goofy looking Alpine-type hat was passed on to Reed Kavanaugh who wore it in another case (TCOT Vanishing Victim, #258) in which a corpse was misidentified. Submitted by BobH, 9 October2022.