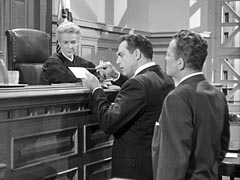 From The Perry Mason TV Show Book
Perry gets a phone call from George Hartley Beaumont, a man who supposedly died in a plane crash over the Atlantic nearly three years before. Actually, George missed that plane and decided to take advantage of the accident to disappear, letting his wife collect the $90,000 insurance policy. Meanwhile George has been living incognito with his girlfriend, Ruth Whittaker.

George grows tired of life-on-a-limb and wants to return home. His plans are cut short, however, when someone buries a letter opener in his back.

Perry defends Ruth when she's arrested for the murder.

For some reason the courtroom is flip-flopped in this episode. The witness box is to the judge’s right, not left and Perry and Della sit to the judge’s left instead of right. Submitted by PaulDrake33, 15 June 2008.
+ Speaking of flip-flopped, we get to see a flipped view of Perry's office, in the scene we see Della's pendant mentioned below with Paul entering from his usual side door. We see one of those 50's pole lamps in the background. Submitted by HamBurger, 10/1/2017

There sure are a lot of scratches on that witness box. Maybe they should have used the one on the judge's left. Submitted by Wiseguy70005, 7/21/13.

First episode where Della wears a pendant with the initials D S in script. Submitted by PaulDrake33, 15 June 2008.

First episode where Lillian Bronson plays a judge. She had appeared the season before in “TCOT Sulky Girl” as a housekeeper. Submitted by PaulDrake33, 15 June 2008.

Joan Staley makes her first of four appearances on Perry playing Roberta Quinn. Joan Staley was playmate of the month for November 1958 in Playboy magazine. Submitted by PaulDrake33, 12 February 2009.

There is something strange going on with Joan Staley. All the sources I can find list her birthdate as 1940. That would have made her barely 18 when she filmed this episode. If you look at her she definitely looks older than 18. Also she was married for the first time in 1956. That would have made her 16 then. Not impossible, but improbable. Submitted by PaulDrake33, 3 December 2011.

Anomaly: When Laura Beaumont is on the witness stand she calls her secretary by the name of Roberta Walker. The final credits list her secretary’s name as Roberta Quinn. Submitted by PaulDrake 33, 12 August 2009.

Goof: When Laura Beaumont is testifying she states that the last time she saw her husband was an hour before his plane crashed on November 19, three years earlier. Earlier when Perry was relating the story to Della, he stated that George Beaumont’s plane crashed into the Atlantic with no survivors. It would be impossible for a plane to get from Los Angeles to the Atlantic in an hour. Submitted by PaulDrake 33, 12 August 2009.
+ Not a Goof: The question Laura Beaumont is asked is when she last saw or heard from her husband. There is no reason he would have been flying from L.A. as trans-Atlantic jet service did not begin until late 1958, and that was NY-London. She could have been speaking with him by phone or with him at a New York airport. Submitted by Fitzt, 3 March 2011.

Goof: When Mason asks McKay a question, McKay makes a speech (which sums up the Perry Mason formula) that Mason not only gets his clients off but he also produces the guilty party. Then he answers the question of did he know Beaumont. But Mason didn't ask that, he asked how well did he know Beaumont. Mason did not object to the wrong question answered. Submitted by Wiseguy70005, 7/21/13.

Syndication cuts: Scene in Mason's office before Tragg calls, with Della telling Gertie to go home, Paul hungry and leaving; Mason arriving at the motel and not speaking to reporters; second scene with Perry, Mrs. Beaumont and McKay where Laura tells Mason she didn't know her husband was alive; shot of the freeway after Paul visits Folsom. Submitted by Wiseguy70005, 8/12/12.

This episode--the first of the second season--is the second of two consecutive episodes featuring Joan Camden. She is also in the last episode of the first season--TCOT Rolling Bones. Her characters were unlucky--in both episodes, her boyfriend is the murder victim. Submitted by 65tosspowertrap, 5-3-2014.

This is also the second (consecutive) season opener featuring Vaughn Taylor...and he isn't a very nice person in either episode. Submitted by Notcom, 090216.

This is the first of five PM appearances for Jeanne Cooper, the mother of Corbin Bernsen...MikeM. 9/1/2016

This is the final of sixteen PM appearances for prolific character actor Jack Gargan (Court Clerk), who was born in England. Jack Gargan passed, aged 58, on 30 September 1958, ten days after this episode aired...MikeM. 6/13/2018

Does anyone else find it odd that Tragg calls Mason to identify the body, rather than the man's wife? If Tragg knew Mason had been the man's attorney years before, he must have known of the existence of the wife. cgraul 3.26.12
+ Tragg wan't familiar w/ Mason-Beaumont's business relationship, he called him b/c Mason's name was found in the room. (As for not calling the wife, perhaps she had the phone off the hook during her brief convalesence.) Countered by Notcom, 090216.

We get a brief look at that staircase set in its new configuration - the slight curve at the bottom has been straightened. It will soon become one of the hardest working sets in the series. That motel room set gets a lot of use as well, but the diagram shown in court does not correspond to the room as shown. DOD 06/13/18

Perry goes to Laura Beaumont’s office ostensibly to see if she wants some old files related to George’s estate. She doesn’t, or intimates she doesn't. As Perry is exiting the office, you can plainly see a light-colored (white?) tripod bowl next to a lamp. Both objects are on a credenza or shelf adjacent to the door. These tripods turn up in various places in the series. Perry’s office for one, e.g., on a low bookcase on the "mystery or long wall" roughly opposite the balcony. See pictures 3 and 4 from episode 47 here. Also in evidence is a pottery figure of a dog (less probably a pig). I think both the tripod bowls and the dog are inspired by pre-Columbian forms, e.g., Colima and what-not. I say inspired because the tripods appear highly finished and likely modern interpretations. Also note in picture 3 the bowl or dish on the wall above the bookcase, I propose this is the same object that appeared on the wall near Perry’s desk before the “African Mask” took up residence. Submitted by billp, 12/30/2008.

It would be a very odd use of an attorney's time to hand-deliver a document in this manner. Laura would have been very questioning of Mason's reasons, one would think. cgraul 3.26.12

Another problem with George Beaumont’s air travel?: Early on we learn that he survived because he missed his flight. Surely American Eagle Airlines had to verify that each passenger had a passport before allowing them to board, so that AE had an updated passenger list at the airport. Even if AE made a mistake on its list, wouldn’t Beaumont have gone to an AE ticket counter to get a ticket on the next available flight? Or, if AE’s list were correct and Beaumont just skipped town after missing his flight, then wouldn’t investigators be looking for him as a possible suspect in the plane crash? Submitted by masonite, 12/02/2011.

On a more-upbeat note, I love the ending of this episode with Perry, Della, and Paul. Credit goes, I assume, to Don Brinkley and Gene Wang for deftly foreshadowing it. Submitted by masonite, 12/02/2011.

I believe this is the first time they used the Style P opening, and it's a very strange opening. Why does Perry open the folder and read a little bit and smile, when he already knows what the documents contain? And why does Perry tuck the folder under his arm to carry it such a short distance? And my main objection: Since the documents are in a folder (unlike the first opening, where they were loose) then why don't Della, Paul, Burger or Tragg open the folder and glance at the documents, like Perry does? Do they have X-ray vision? Ray Collins' expression says it all; the opening makes no sense. Submitted by scarter, 8/10/14
+ I have to add here is that the other thing that makes this opening 'odd' for me is Paul's reaction, or lack of it as Perry hands the document to him, and then to Della. He just stares into space without changing his facial expression, or even body movement. Wonder what that was all about?? Submitted by MikeReese, 8/16/2014.
++ It may not make sense in the real world but it does in the reel world. First it eliminates the impossibility of all four characters sitting at the same table and gives the actors a "promotion" by showing them separately in pairs. This, however, gives them less screen time so there was no time for them to actually look at the document. As far as Mason tucking the document under his arm, it just looks better than to have him carry it over in one hand. I wonder how long this opening would have been used if William Talman hadn't been fired near the end of the third season. (That interim end-of-3rd-season opening was worse with Mason's smile looking more like a grimace and moving the document around until the freeze frame mercifully takes over.) What really makes the opening of this episode odd was the last appearance of the first season theme music which didn't fit the new video. If I'm not mistaken, I don't believe this version was shown in the original syndication package where many first-season episodes had the second-season music dubbed over the opening credits. Submitted by Wiseguy70005, 8/16/14.
+++ Paul may stare blankly (IMHO he knows that a quick look at a legal document may mean little to him), but Tragg opens and closes his mouth a couple of times, looking to me like a guppie out of water. jfh 26Jun2019.

Name that Crime Much is made of the premise that Beaumont is facing prosecution for insurance fraud, but is that really the case ?? He didn't collect the money, and the person who did didn't act fraudulently since she actually thought he was dead...hmmm...(Perhaps those more familiar with the statutes on this issue can tell us if there is a crime in allowing insurance to be wrongfully claimed.) Pondered by Notcom, 090216.

He did not personally profit illegally, but did knowingly arrange for his wife to do so. Although she would not face prosecution, I don't doubt she would be ordered to return the money. Insurance fraud, in any degree, is one of the hardest things to get away with. DOD 06/13/18

Extraneous sound: Perry, Paul and Della talking in the office. Just after Della says "I can be stubborn, too." there's a crashing sound off camera. Kilo 7/1/2020.