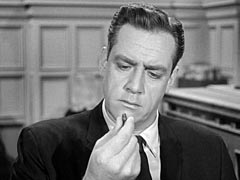 From The Perry Mason TV Show Book
Dr. David Craig is in big trouble. Some of his tapes of conversations with his psychiatric patients are missing, and being used for blackmail. After a brief consultation with good friend Perry Mason, Craig decides to drop the issue. But Craig has been covering for Edith, his nurse and the woman he loves, while she in turn has been protecting her brother from the mob. When Edith's brother Mark is murdered, the good doctor is arrested for the crime.

Perry cases the scene of the crime in a new convertible. There follows one of his most explosive trials. 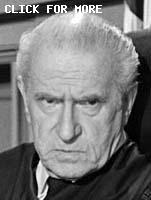 Anomaly: Michael Fox is listed as Dr. Hexie in the closing credits, but is called Dr. Hoxie during the trial. Edited by Charles Richmond, 12/5/2008.

The Bedeviled Doctor of this episode is nicely acted by Dick Foran. Old-timers will remember Dick Foran as the Warner Brothers singing cowboy answer to Gene Autry in the late 30s and early 40s. While acting in over 20 western movies, he introduced his theme song “I’ll Remember April” in Ride Em Cowboy in 1942. Submitted by PaulDrake 33, 11 August 2009.
+ One unorthodox western Foran acted in was the W. C. Fields classic "My Little Chickadee" (1940), where he portrayed one of Mae West's suitors. Submitted by francis, 7/15/14.

The plot of this episode is similar to that of Whirlpool, a 1950 movie sterring Gene Tierney, Richard Conte, José Ferrer. jfh 20Oct2017.
+ It also closely parallels the AHP episode The Case of M.J.H. (which featured PM alum Richard Gaines, on the other side of justice this time). Altho the PM presentation predates the latter by several years, it only predates the story from which it was adapted by a few months; and given the lag between writing and publishing, it's not a stretch to think the one directly inspired the other. Notcom, 010422.

Sightings: Two of the blurry background figures in the courtroom gallery appear to be “Miss Carmody” and Distinguished Gentleman #1. The Little Old Lady In a Hat can also be seen in the gallery. More about these people here. Submitted by alan_sings, 16 October 2010.
+The Distinguished Lady #4 plays a patient (Mrs Wallace) that is waiting for the doctor around the 6 minute mark. This is the best view that we will see of her in the entire series. Submitted by BigBill767, 2/4/2017.

Uncredited Actors: Don Anderson’s appearance in this episode is very brief. In the establishing shot of the doctor’s office, Anderson and a woman companion walk past the building. Submitted by FredK, 25 Oct 2010.

License plate: Perry has done it again. He drives a Cadillac with a different plate number - RGG 277. It is the fifth different license plate on one of his Cadillacs. Submitted by H. Mason 10/18/14

Car Talk: Kid brother Mark drives a Cadillac -- a few years old, but still a Cadillac. The career choice of gambling bum must have provided an OK income. Meanwhile sister Edith's ride is an Edsel. According to edsel.com, you could drive one of those beauties away for about $3,000, and a little more bought you a ragtop or station wagon. I've not made a count, but there seems to be a disproportionate number of Edsels in Perry Mason; Ford Motor Company must have leaned heavily on CBS for marketing support for the ill-fated itinerant icon. JohnK, 13 December 2015

It goes much deeper than that. There were multiple reasons for the failure of the Edsel, and the failure of that brand completely changed the way the entire automotive industry operated, especially when introducing new concepts. The reason there are so many Edsels in this season of PM is multifold. First of all, products that were associated with popular TV shows often did well. PM was, and still is, one of the most popular shows on TV, in fact, it was so popular that the show stayed popular through multiple changes in our society. Third, FORD hoped that being associated with PM would overcome all the problems they had with the brand. They were wrong. Submitted by Arisia, 02/18/18

The fine book "Ford: The Men and the Machine" has an excellent section on the Edsel. The stories of it being an all new car developed over many years were all hype. It was actually far too hastily run through, and never even had a dedicated assembly line. Instead, it was built in Mercury plants which required workers to deal with separate parts bins at nearly every step. The stories of quality problems were all too true, and probably inevitable. DOD 07/12/18

REUNITED CAST: Raymond Burr, Dick Foran and even Lee Miller all appeared in the 1956 noir, Please Murder Me, with Burr defending Angela Lansbury (J.B. Fletcher, herself!) Submitted by WJones 2/19/2016

This is the only PM writing credit for Jay Dratler, who was born in NYC to an Austrian mother. He passed from a heart attack in Mexico City at the age of 58...MikeM. 9/30/2016

When Dr. Craig describes walking into his office the morning after the burglary, he tells Perry, “There were papers strewn all over the place; my safe had been forced . . .” but in fact the safe had not been forced. Mark Douglas had made a duplicate of Edith’s key and simply used the duplicate key to open the safe. Submitted by Dan K, 10/28/17.

Knowing the kind of irresponsible punk Mark was, he probably did spread papers all over the office out of spite. I am ALSO surprised that he didn't take the narcotics that were in the safe too. As to the safe itself looking forced, maybe Mark did make it look forced to protect his sister; the only DECENT thing he probably EVER did in his entire life.
The only part of the tape we ever hear is a typical slice of how rich people in the late 50s and early 60s actually did think. It was such an embarrassment to him that his wife was 'drunk in front of the maid' that he felt like killing her. Sad. Submitted by Arisia, 02/18/18

While Dr. Craig's statement that his safe had been forced was certainly untrue, it's possible he merely assumed so because it had been locked, and it was now open, and he had the only key. It may not have occurred to him that the lock could have been picked, much less his key duplicated. Or he could have been using "forced" in a broader, informal sense of any unauthorized opening. Or, in perhaps the most troubling possibility, he may have consciously or unconsciously realized that his beloved nurse was the only other person with access, and been unable to deal with the possibility that she'd betrayed him. Submitted by GCL, 06/10/18

This is the first of three PM appearances for Marianne Stewart (Edith Douglas), who was the daughter of German actor/director/writer Reinhold Schunzel. Stewart was married to actor Louis Calhern. Marianne Stewart passed in Los Angeles in 1992 at the age of 69...MikeM. 7/12/2018

This is the first of five PM appearances by Phillip Terry, who also starred in many movies including Born To Kill, Seven Keys To Baldpate, and perhaps most notably, The Lost Weekend. jfh 20Jan2021

Has anyone else ever noticed a sort of "sub-theme" to this episode? All the main characters blame themselves for others' behavior. Dr. Craig blames himself for not safely keeping the tapes; Edith blames herself for Mark's behavior, and Mr. Heywood blames himself for his wife's alcoholism.
+1 Peter 4:8 "Above all, love each other deeply, because love covers over a multitude of sins." NIV
++ Ironically, this very line - more or less - made it's way into the script for the PM screen tests; the tests demonstrate a great deal of racy humor- which didn't quite make it into the actual show - and also the premise of "don't take off your fur coat" (tho I doubt the reason in the series was the same as here!) Tacked on by Notcom, 072519.

For my money, Mark is the most thoroughly despicable character in the series. Too bad he overreached himself blackmailing and cheating five people simultaneously. DOD 08/07/20

Don't speak out in Judge Frederic Worlock's courtroom. You might get five days in jail, postponed only until you testify for the prosecution. Submitted by MikeM, 11/02/2012.

"Police discover murder victim!" Seriously? A murder in Los Angeles gets a giant headline on the front page? Even in the Fifties, I'd have to think murders were fairly common in Los Angeles. Submitted by scarter, 8/3/14
And what size type would the Chronicle use to announce World War III?
+ The confession headline shown in the epilogue would still make the front page today...MikeM. 6/24/2016

During the trial, Mark Douglas, the victim, was supposedly strangled hours before his murder. Who did this? I got the impression and other possible plot threads were not shown. Submitted by Perry Baby 2/24/15
+ Mark was choked for a few seconds by a very angry Dr. Craig. Mark's sister stopped the assault...MikeM. 6/24/2016

In the opening scene, Edith carries her milk upside down.

"You have a very Loyal secretary," Perry says to Heywood; so does Perry. Della Street was a Career Girl Before Women's Lib in the '60s when Lt. Uhura pioneered a new type of Female character.
+This scene and dialog reminded me about how my schoolmates and I used to joke about the relationship between Joe Mannix and his secretary, Peggy: the girls insisted that they were either secretly married or intimate, because they said 'no secretary cares about her boss like that!' Submitted by MikeReese, 12/22/2020
Notice also how Perry dotes on Della: bringing her her gloves and handbag, and holding her handbag while she puts on her gloves. What a sweetie! jfh 30Sep2016

Episode has an impressive array of cars, per The Cars. However MeTV edited out all the car scenes yesterday except the brief one with the police car which includes a glimpse of a white-top sedan somewhat obscured. Ronny Fowler's car I believe. How much does MeTV cut out? About 10 minutes? Makes sense plot-wise to cut those scenes, though it subtracts from the 50s ambience. Rick P 24Aug21

Some things that don't make sense in the courtroom: (1) how does Burger know the details of the private conversation between Edith and Mark in her apartment (that Mark told her he needed the tape or he would be killed); (2) how does Burger know that the Dr. had [lightly] strangled Mark? (I supposed Edith could have told Burger, but would she admit that the Dr. tried to strangle her brother?); (3) On the stand, Heywood says he believed the Dr. when he said he would kill Mark, if he had to, to get the tapes back, but then admits he thought Mark and the Dr. were in cahoots together — so Heywood couldn't have believed the Dr. really would kill the person he was plotting with. —yelocab 02JAN20