Check here for Perry’s office address and telephone number. The girl in the scene doesn’t seem to be wearing colored nail polish but the pointing finger is. The same finger is also seen in #265. Submitted by daveb, date unknown.

Check out the scene at the airport. At the very beginning of the scene, when Ryan O'Neal is all alone, you can see someone in the background, seated, reading a newspaper. Look closely, and you will see it is a man wearing a dark suit. After Ryan O'Neal and his step[jfh 16Jun2020]-mother finish conversing, she exits the airport by walking right past the man reading the newspaper. However, now the man is wearing a light colored checked suit, and lo and behold it is Paul Drake. Submitted by PaulDrake33, 8 December 2014.
+ Looks like the same checked suit and pocket handkerchief to me (during about 13:30-14:50 on the 2012 Paramount DVD), and more lighting during the end of the scene. lowercase masonite, 3/20/16.

Location: About 15 minutes in, there is a quick shot of Los Angeles International Airport with a glimpse of the Googie styled “Theme Building.” It looks like a space-aged bug or flying saucer on legs. I have read it was the inspiration for buildings in the cartoon the Jetson’s. I have eaten at the cool eatery at the top called the Encounter Restaurant. Also appears in Episode #177. Submitted by Eric Cooper, 8 July 2010. Some pictures here.

The Curious Coffee Set shows up next to the sink at Miss Dearborn’s seaside home. Submitted by gracenote, 3/7/2011.

Sightings/Uncredited Actors: In the courtroom gallery sit Quiet Old Man #1 and Don Anderson, watching Perry work his magic. Submitted by gracenote, 3/7/2011.
And behind Perry, next to the wall, looks like Newman from “Seinfeld” ! DOD 03/03/22

+ At the airport, a blurry Distinguished Gentleman #1 smiles at his escrot as they walk in the background. Submitted by gracenote, 8/9/2011.
+At the murder scene, Don Anderson is working as a Medical attendant loading the victim and Distinguished Gentleman #1 is working collecting evidence as he kneels behind Miriam Worth. Submitted by BigBill767, 6/18/2016.
+ At least in the print that I saw, the Miriam Worth character had no dialogue at all—just a few ominous looks! Submitted by Ed Zoerner, 9/16/2011.
+ According to the dialog at around 10:59 on the 2012 Paramount DVD, she is the 5th wife of Chet Worth and apparently suspects that he is overly involved with Stephanie Carew. Miriam shows up at the end of the scene without saying anything. Maybe her lines were cut during which she told Chet to leave Stephanie alone?, thus making Miriam an additional suspect. lowercase masonite, 3/20/16.
+ Sandra "Sandy" Warner -- who plays Stephanie Carew in this episode -- is most famous for modeling album covers, particularly those for Martin Denny. She also made her own album in 1959, "Fair and Warner." Compared to her extensive activity as a front cover model, she did relatively little in the way of acting. Submitted by Uncle Dave Lewis 5/2/16.

CARS. Provision of cars seems to have been done "on the cheap" in this episode:

Background cars: At 28:43 there's a location-establishing shot of the Hall Of Justice (offices of the LA County Chief Medical Examiner) viewed from West Temple St, looking across the intersection of Temple & North Broadway. It's the same camera position as the shot in ep#196 but shows different cars. Closest to the camera are a 1955 Chevrolet 210 2-Door Sedan and a 1955 Buick HardTop. Two cars cross the intersection L→R on Broadway: a 1957 Plymouth Belvedere 2-Door HardTop followed by a very pretty 1956 Plymouth Belvedere Convertible, top down.
It's amusing that the Producer/Director/Writer team must have decided that they needed the cachet of "Rolls-Royce" in the script but that "Lincoln Continental" simply wouldn't have had the same ring to it! Imagine if the dialogue at DVD 11:09 was:
Stephanie & Chet at poolside. (close-up 2-shot) Stephanie reclining on lounge chair, Chet sitting close. Stephanie playfully adjusts Chet's cravat:
Stephanie: May I borrow a car once more, dear?
Chet: I'll have Bernard bring out the Lincoln Continental.
Stephanie: Oh No Thanks! But the Rolls-Royce will do, Dah-ling!
Chet: The silver Saloon or the red Convertible?
Stephanie: I think I'll marry you simply because you're so rich.
That's probably close to what Sales Executives of Ford Motor Company thought they actually heard! Added by Gary Woloski, 9/27/14.

Ryan O'Neal (John Carew) is still on TV, playing the father of forensic anthropologist Temperance Brennan, a.k.a. Bones. --submitted by 10yearoldfan, 26 May 2014.

Recycled newspaper: The paper Paul had at the airport was from episode 8 TCOT Crimson Kiss. He must be a slow reader because he was perusing the same paper in episode 22 TCOT Fugitive Nurse. Submitted by H. Mason 9/29/14

Phone Book: The two people listed immediately after Perry had the addresses of names used in the page shown in episode 193 TCOT Badgered Brother. Gerald Masa (which should have been two names earlier) 6361 Las Palmas was the same as Harry Rimerman (from 193) - Gerald's phone number PO 3-0192 was used for at least three different people in #193 - Leonard Massarotti 6190 Bronson was the same as Robert Rimmer (from 193). Many of the phone numbers in this episode's page were used more than once and also used on the page in #193. Names above Perry's were repeated at the bottom of the right column. Submitted by H. Mason 3/14/15

Terrible Typography This page in the phone book repeats names, numbers, addresses, aggh! It's not even alphabetical. Making a phone call in LA must really have been a challenge. JohnK, 12 Feb 2016
+ It's Los Angeles where everything is a challenge especially the traffic so that makes sense. ;-) HamBurger 8/20/2016

Victim's Death: There have been over 200 murders in the series and I think this was the first current victim that was drowned. It was never mentioned if the first victim in #59 drowned. Submitted by H. Mason 3/14/15

I don't know if there are any comic book readers here, but Douglas Fowley's portrayal of agent Rubin Cason reminded me of a character that was almost universally thought to be a sharp mockery of Marvel Comics editor/writer Stan Lee. When Marvel creator Jack Kirby left Marvel in the early '70's to work for competitor DC, he started a number of interconnected books often referred to as the 'Fourth World' - one of them, 'Mister Miracle', introduced a character named 'Funky Flashman', and the resemblance to Stan Lee was unmistakable. Check this image: 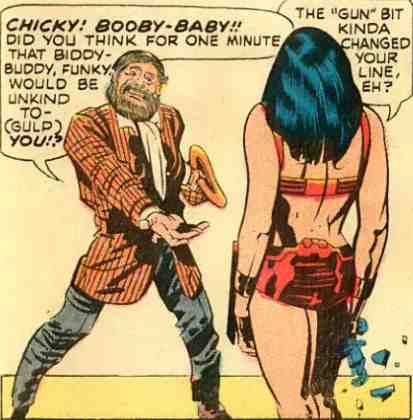 ... I have to admit I laughed out loud! Submitted by MikeReese, 4/9/2016.
+ I am an old-time comic book reader and an ex professional comic book editor, and yes, that speech pattern is a stone-cold takeoff on the way that Stan Lee talked at that era in his life. I thought it was funny and laughed at it myself, then came here and found that i was not the only person who noticed!. For those unfamiliar with Stan Lee, he did not always have a beard, as depicted above. The Funky Flashman character was a bit more over-the-top because that character was a mean parody of Stan Lee, but the Rubin Cason character was just spot-on and there is more to the impression than the voice -- even the body gestures were like his. Submitted by catyron, 1/9/2017.

This is the only PM appearance for Sandra Warner, who played Fess Parker's wife on the sitcom Mr. Smith Goes To Washington...MikeM. 1/3/2017

This is the second of two PM appearances for Quebec-born Fifi D'Orsay, who picked her stage name based on her favorite perfume...MikeM. 1/9/2018

This is the first of two 1964 PM appearances for Lonie Blackman. According to IMDb, these two PMs were the final two appearances in Lonie's Filmography. In her second PM appearance, TCOT Bullied Bowler, she would be billed as Lonnie, with a double "n"...MikeM. 4/23/2018

This is the first PM appearance for the smoky voice actress Jean Carson, as Mrs. Mitchell(the neighbor witness). One of Carson's more memorable TV roles was in the recurring role of "Daphne", one of the 2 Mount Pilot "Fun Girls" on "The Andy Griffith Show". The 2 Fun Girls would drop by Mayberry and double date Barney Fife and Andy Taylor. Daphne was enamored with Andy, who she would greet with her sultry "Hello Doll". This February 1964 PM episode fell between her first "Fun Girl" Andy Griffith 1962 episode and 2 later "Fun Girl" episodes in April 1964 and April 1965....Bob61571, 2 May 2018