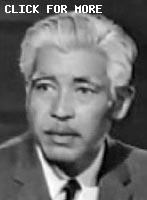 Sightings: “Miss Carmody” appears, dressed unusually spiffy in a gorgeous hat and pearls, in the courtroom gallery. Read more about her and other recurring spectators. Submitted by gracep, 1/8/2011.
+ She also appears, all dolled up, with an escort as she strolls behind Joane Proctor as she makes a phone call. And another courtroom spectator is the Thin Man. Submitted by gracenote, 7/22/2011.

Location: The scene where a lake is being searched for a body was undoubtedly shot at the Los Angeles County Arboretum in the City of Arcadia -- a site for many film and television shoots. The lower archways of the old Queen Anne cottage can be seen in the background. More pictures here and here. Submitted by Fifty-Niner on 19 April 2012.

This episode begins another version of the two-part closing credits seen in the previous season. Now the main production staff and cast is seen in the first half and the rest of the production personnel in the second. As in the previous season the second half begins with the words "Perry Mason" written in quotes. In the syndicated version, the two parts are joined together. Submitted by Wiseguy70005, 7/02/12.

Background Cars. Parked on roadside as Joane drives in to DORADO HOTEL:

In the view of LOS ANGELES COUNTY COURTHOUSE from across the street @ 34:24:

The story portrays Demming's car as having an automatic transmission, although this is not explicitly stated. The car was manufactured at Chrysler's Los Angeles Plant which Burger, technically correct, refers to as "the San Fernando plant". All I've written here applies equally well to the '59 Dodge, Car(2a), which bravely volunteered for the final plunge shot. Having read this paragraph, you now need to FORGET IT while watching the testimony of "Auto Engineer" who, in court, demonstrates the operation of a car which exists only in the Parallel Universe of Perry Mason. Added by Gary Woloski, 6/6/13.

Auto Engineer (Ć) is introduced to Court by Burger to describe the operation of Demming's car. Ć has with him a functional mock-up incorporating a complete steering column and handbrake actuator, supposedly duplicating the controls of the car in question. Initially, the gear selector lever is set to out-of-gear and the handbrake is applied. Two operations are shown to demonstrate an interconnecting mechanism between the gear selector lever and the "emergency brake" (handbrake):

As Burger is re-applying the handbrake, the scene concludes with these lines:

The whole demonstration is so contrary to Real World, safe automobile design & operation that viewers are bound to be totally confused. But the drama moves on so quickly to the next witness (the Druggist) that viewers don't even have time to think of asking why the Prosecutor would call an Expert Witness to testify so favourably for the Defendant. Added by Gary Woloski, 6/9/13.

Auto Engineer's Prop. The Steering Column and Steering Wheel of Ć's mock-up are those of an automatic-transmission-equipped 1957 Buick. The Column has been rotated 180° on its axis so that the gear selector lever is on the Left and the turn-signal lever is on the Right (ie, it's upside-down). A thorough comparison between the video of Ć's contraption and the '57 Buick interior will confirm that the Steering Columns and Steering Wheels are identical. Added by Gary Woloski, 6/9/13.

I want to thank GW for his thorough research on all these cars and car issues. --Submitted by 10yearoldfan, 27 August 2013.

Crash Consistency: Regarding cars, this episode is one of a few where the car that heads toward the cliff is the same car, more or less, that we see tumble down the cliff. JohnK, 19 January 2016

In the scene where the body is discovered, just after Timmy enters the room, the camera briefly shows the dead body again ... an eye on the body blinks. Submitted by Babo, 1/29/2015

This is the first of four PM appearances for Jan Shepard, who supposedly was Amanda Blake's roommate before Blake got the role of Kitty on Gunsmoke...MikeM. 11/3/2016

This is the only PM appearance for Evelyn Ward, who was married to Jack Cassidy and is the mother of David Cassidy...MikeM. 2/9/2017

Juvenile actor Dennis Rush makes his only Perry appearance here as Timmy. Dennis Rush is best known for his eight appearances as Howie Pruitt, one of Opie Taylor’s friends on the long running Andy Griffith Show. Submitted by PaulDrake 33, 24 November 2009.

I have been a criminal defense attorney for over 20 years, and NEVER have I heard about a defendant jumping up in the middle of a trial and yelling "That's a lie!" And yet it occurs over and over in PM. Perhaps the most consistently irritating element of these excellent shows. cgraul 12

That staircase set makes at least its third appearance in a row. Why didn't Mr. Gage call Perry himself from the phone in his room?

Is the happy ending really appropriate here? Perry clears his client, of course, but in a way that it seems the inheritance should fall to the loathsome George Gage, who wants to close the children's foundation. So the cheerful softball game at the end here might be out of place! Submitted by Ed Zoerner, 4/25/2009.

To answer Ed Zoerner, George Gage tells us in court that he could not afford to accept the inheritance publicly, because he has promised 150% of it in divorce settlements to his ex-wives. He has no choice but to refuse the estate, and let it pass to Claudia. --Submitted by 10yearoldfan, 27 August 2013.

In the last scene Perry said Joane and Nick would probably get probation. What happened to Dr. Olmstead and George Gage? Submitted by H. Mason 12/15/14 Dr. Olmstead would probably be charged with corpse tampering and obstruction of justice. George Gage committed perjury when he claimed to have seen Ernest Demming at the motel.

I am reminded of the old joke about a woman who wanted poison from her pharmacist to kill her husband. The pharmacist, shocked, refuses, until she shows him a photo ... of his wife in intimate contact with HER husband. He then says, "Oh, that's different then, I didn't know you had a prescription!" Submitted by MikeReese, 2/10/2017.

The idea that someone could swap a corpse tied up in canvas with a suit of armor and NO ONE NOTICE THE DIFFERENCE is beyond ludicrous. And wouldn't the fruit stand man have wondered about that rope and canvas tied around the supposedly ill passenger? This episode really strains credulity. DODay 11/08/17

The body/samurai wrapped in canvas was dumped into the ocean by the Doctor. The body in the car was Nick. Remember (in the scene at the coffee shop) how Nick said he scratched his hand when he jumped out of the car, and Joane had been worried that he had gone over the cliff with the car--until he called her. --Submitted by yelocab 02/02/2018

I agree with DODay (see comment above): Nick didn't notice the difference between a dead body and a samurai statue when he was dumping the "body" into the lake? Unbelievable! Submitted by JazzBaby, 3/18/2019.

TCOT Criminal Clique Five of the six top-listed characters in this episode committed crimes--whew! As far as I can tell, only Claudia did nothing wrong. That's a lot of criminals! Submitted by JazzBaby, 3/18/2019.