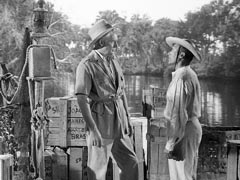 The jury returns from their chambers to give the verdict on case number CR11532; the State of California vs. Perry's client, Janice Barton. They find Janice guilty of murdering her invalid Aunt Amanda and sentence her to die in the gas chamber.

How did Perry manage to lose a case? Well, for one thing, Janice lied about where she was at the time someone gave her aunt poison instead of medicine.

Perry is troubled. The evidence stacks up against Janice but he still has a hunch. And as long as he has one of those hunches, he'll keep looking for the real killer. In this case, it turns out to be someone very unexpected.

Anomaly: Lee Begere, listed at Dr. Nevin, is called Dr. Nivens by Perry and others. Jan Shepard, who plays his wife, is called Mrs. Nivens. Posted by daveb, 12/20/2007.
+ Burger, however, addresses him as “Dr. Nevins” at least once. And Nurse Elizabeth calls “Nevins,” too. Perry Mason says “Nevins” during the scene with the nurse, but then in the very next scene reverts to “Nivens.” Finally, throughout the broadcast no matter how pronounced, the name is spelled “Nevins” in the captions for the deaf (at least those supplied by VITAC for broadcast today). Submitted by gracep, 2/15/2011.

David Sadowski noted in the Perry_Mason Yahoo! group that this high-impact episode was aired on 10/03/1963, two weeks ahead of its scheduled date, so as to be included in the fall TV ratings survey. More information here.Submitted by daveb, 1/16/2011.

CARS. At 21:50 Perry & Paul rush to see Janice before she's transfered to "Corona" ("California Institution for Women at Corona", officially "Frontera" in 1963, now just CIW. At the rear of the LA jail she's just about to be put into Car(1) for her transfer:

Background Cars. At 18:30 there's a location-setting shot of Perry's Brent Building with the lettering "BANK OF CALIFORNIA BUILDING" quite readable over the front entrance. Two cars are parked out front:

For 1963, the real-world LAPD bought a fleet of 1963 Ford 300 4-Door Sedans. Patrol cars had a siren and a pair of red flashers on the roof; paint scheme was white doors & roof, remainder black, as pictured. Detectives got all-black 6-Cyl '63 Ford 300s.† In this episode Lt Anderson gets a Buick with plain-clothes driver: it's a nice car but not as extravagant as the Buick Electras that Tragg had in Seasons 3 & 4! Added by Gary Woloski, 12/28/13.
† Reference: (1) Encyclopedia of American Police Cars by Edwin J Sanow, p103.

Sherry Hall, the credited BAILIFF, was both an actor & an assistant director. Mike Bedard Presidents' Day 2015.

Sightings: In the opening act, as the courtroom gallery fills with spectators, Distinguished Gentleman #1 (with glasses) and Quiet Old Man #1 file in. Little Old Lady #1 has also managed to sneak in off camera. The latter two return to the courtroom gallery to observe the sentencing of poor Janice. Ever wonder, Who Is That? Submitted by gracenote, 2/15/2011.
+ I do not see anything posted yet, but isn't that Miss Carmody walking in as the second juror in the opening scene? Submitted by mesave31, 10/14/14
+ Definitely Miss Carmody, front and center. Submitted by catyron, May 20th, 2018.
+ Well now I beg to differ. The woman sitting next to the Jury foreman is not Miss Carmody. And I was eventually able to freeze on the clip where the jurors are asked whether that was the verdict of them all (and they all nod), a scene where all 12 jurors are visible. Miss Carmody is not present. Submitted by Clothears, 21st June 2020.

Uncredited Actors: As the jury of the opening act grimly files in after deliberation, we find none other than Bert Stevens, Barbara Stanwyck’s brother, among them. He also joins the spectators (above) in the gallery as hapless Janice is sentenced. Submitted by gracenote, 2/15/2011.

Michael Fox, credited for his frequent role as Dr. Hoxie, does not appear. However, his voice is heard as Perry mentally reviews testimony from the trial while visiting the murder scene. Submitted by daveb, 2/16/2011.

Courtroom Reversal: I know I'm stating the obvious, but I don't remember any other episode with prosecutor Hamilton Burger on audience left side and defense attorney Perry Mason on audience right. It makes sense to switch locations in this rare trial that Perry apparently loses. -Submitted by 10-year-old-fan, 18 January 2014

PLANES: Paul flies to Brazil at 23:13, apparently aboard a DC 8. Note the dark spots on the lower portion of the nose (air intakes?) and the shape of the engine nacelles, which have smaller radius at front and back. The plane is painted in the style of TWA: a dark band outlines the passenger windows but stops abruptly before the pilot's cabin. If anyone knows more about airplanes than I do, please correct me. - Submitted by 10-year-old-fan, 18 January 2014

The Victim: This was the third story where the murder victim was never shown. See episodes 1 and 121. Submitted by H. Mason 2/19/15

Perry's client on the stand: Through dialog it was revealed that Perry had Janice Barton on the witness stand. In three other stories Perry had his client testify in court. (episodes 150, 162 and 173 was not a murder case). Submitted by H. Mason 2/19/15

Actresses: Erin O'Brien-Moore, Letitia Simmons in this story, and Erin O'Brien who appeared in episode 173 (TCOT Golden Oranges) are not the same person. Submitted by H. Mason 2/19/15

Seeing Dubb-le No that isn't frequent PM alum Don Dubbins, but rather uncanny look-alike Steve Franken. The producers had a curious abilty to hire look-alikes - think Constance Ford/Towers, Barbara Lawrence/Bain - yet somehow missed out on Phyllis Thaxter, who could match Julie Adams in both appearance and hysterics; and despite the obvious possibility of having such doppelgangers play siblings or clones - confused identity was a theme used several times on the show - the opportunity was never taken advantage of. Submitted by Notcom, 031016.

This is the second of four PM appearances for Jan Shepard, who played Nurse Betty on five episodes of the 1957 television series "Dr. Christian"...MikeM. 12/15/2016

This is the second of four PM appearances for Julie Adams, who was married to screenwriter Leonard Stern and to actor Ray Danton...MikeM. 3/23/2017

- In the eternal world of syndication Janice Barton will forever cheat Death, but here in the real world her counterpart has joined him. I met Ms. Adams a number of years ago at a book promotion, and tho a phallanx of handlers and well-wishers prevented me from being able to coax from her any memories of her PM experience(s), I recall she - then in her late eighties - was still beautiful and vivacious. Notcom, 020519.

This is the only PM appearance for Erin O'Brien-Moore who was born Annette O'Brien-Moore. She appeared in 82 episodes of the television series "Peyton Place"...MikeM. 4/10/2018

This is the only PM appearance for Bernie Gozier who was featured as King Moses in the 1959 television series "Bold Venture"...MikeM. 5/15/2018

DVD Sequence: This episode comes after #182 in the Seventh Season DVD set. Submitted by HamBurger, 8/4/2019

Another anomoly early in the episode: Della doesn't know where Perry is. jfh 15Dec2016.

Seeing Mike Mazurki lifting weights in this episode reminded me, as a lifter, (not a professional, just for exercise) that is one of the few times anyone who lifts weights is depicted as anywhere near normal. Submitted by MikeReese, 1/25/2012

I guess that 1963 was before the stereotype of prison inmates spending their time lifting weights, because Mazurki asks Mason, "And how could I do my daily workout in jail?" Submitted by masonite, 8/25/12.

Condemned-to-death prisoner Janice Barton at one point is "in transit", and she is not handcuffed in the back seat of car with an easily-accessible door lock. Submitted by masonite, 8/25/12.

And the windows are down!

Dr. Nevin takes his nurse to the Malibu beach house to talk her out of drowning herself. jfh 15Dec2016

Near Manaus, Brazil, the River Guide speaks to Paul Drake in Spanish. Interesting because a) Paul Drake doesn't understand the Spanish, and b) the local signage is in Portuguese. Submitted by masonite, 8/25/12.

That is a pretty cushy death row cell Janice Barton has. The cell is about 12X12 with a bookcase headboard bed. Two tables, desk lamp, plants, books, sheets, bedspread. Not bad at all. Submitted by PaulDrake33. 17 September 2012.
+ And she gets to wear a flower-print house dress and a white cardigan sweater. Submitted by catyron, May 20th, 2018

I clearly remember watching this episode back in 1963 with my mom, dad and grandmother. I was 10 at the time. My grandmother loved the show. I remember watching it with her on Saturday nights, so that had to be 1962 (or earlier). It became my favorite show during the 65-66 season. Anyone else willing to admit that they are old enough to remember the series during its initial run? Submitted by Bill-W2XOY on 08/26/13.

+Although technically I am old enough to have seen the series during the last two or three years on CBS (and I probably did occasionally) I just have no recollection of it. (I do recall watching Lost in Space and The Dick Van Dyke Show (CBS prime time and morning reruns) in 1965. For awhile we didn't have a TV in the early-1960s so this might explain my not remembering much before 1965.) Syndication is where I really began watching the series in the late 1960s (the local ABC station showed it at 10pm CST in between prime time and their local news!) Of course, I never saw this episode then since it was one of the 76 episodes not syndicated. I bought and read my first Perry Mason novel ("The Amorous Aunt") in 1970 at age 11! Submitted by Wiseguy70005, 9/9/13.

It's nice to see court clerk Olan Soule having real lines. Incidentally, my father just passed at age 90, and never missed an episode. Because of that, I watch every day, and have owned and read every book -- over 80 of them ! cgraul 11.1.13
+ "The Court Clerk...usually administers the oath to prospective jurors & to witnesses. The clerk is also in charge of physical exhibits introduced into evidence & is responsible for other administrative aspects of a trial," The American Bar Association website observes; Americanbar.org also notes "The Bailiff keeps order in the courtroom, calls the witnesses & is in charge of the jury. It is the Bailiff's duty to be certain no one attempts to influence the jury." Mike Bedard Presidents' Day 2015.

There's that staircase set again!
Anyone else think Lee Bergere resembles Hank Azaria?
The pharmacy must have been pretty easy-going, allowing someone to order the same prescription two days in a row - and if Perry suspected the murderer had ordered the medicine in person, why didn't he just show the pharmacist some photos?
This episode has a real Agatha Christie vibe, complete with a "the murderer is in this room" scene, and the case is solved with no courtroom testimony by any of the suspects.
A minor point - This is the only episode I recall that anyone actually sits on Perry’s office sofa. DOD 01/13/20 [unsigned comments]

TCOT Noir Novelist Wow! This was the most like a film noir of any episode I've seen, thanks to the skillful writing of Jonathan Latimer and the direction by Jesse Hibbs. Latimer was a successful crime novelist as well as a scriptwriter. His film scripts included adaptations of novels by noir greats like Hammett and Woolrich, so no surprise he could turn this out. And I bet Burr loved the chance to deepen his character, as Mason struggles with losing a case. It's clear it isn't about his pride, but his empathy for his client. The scene near the beginning where Mason is reliving the case while exploring the deeply shadowed bedroom of the murdered woman gives Burr a chance to make powerful use of his incredible talent for expressing thoughts and emotions without words. Truly breathtaking. Submitted by JazzBaby, 4/8/2019.

This is one of the few Season 7 episodes to feature Ray Collins as Lt. Tragg. He looks very haggard but sounds considerably better than in his later (and final) appearance -- "The Case of the Capering Camera."