From The Perry Mason TV Show Book
Perry goes back to school when an unlikely book-stealing case leads to sabotage, infidelity, and murder on the campus of Manzana Valley Prep School. 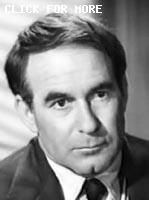 Richard Simmons (no, not the weight-loss guru) played alongside Raymond Burr in Rear Window. He played the “Man with Miss Torso.” Submitted by billp, 15 November 2009.
I remember this Richard Simmons as Sergeant Preston of the Yukon. Submitted by BrandonStreet 1/3/19
Lloyd Corrigan (Harvey Forrest) a "famous face" makes his second of three Perry appearances. Among his many acting credits, he appeared in many of the Boston Blackie movies as Arthur Manleder, Blackie's millionaire friend. jfh 22Dec2017.

Sightings: The omni-present Distinguished Gentleman #1 has once again made a field trip just to see Perry in action, this time at the evidentiary hearing in Manzana County Court. Read more about him and his fellow recurring spectators. Later, back in the Los Angeles County Courthouse, Pencil Mustache Man and Little Old Lady #1 and Quiet Old Man #1 appear in the gallery, all in one shot. Submitted by gracenote, 2/17/2011.

Location: At the 18:24 mark, we see Aaron Stuart approaching a house, which was once the exterior of the Gilbert Bates house, when Revue Productions was shooting "Leave It to Beaver" at that lot. (CBS Television became the primary lessee of the lot by 1963, with Revue Productions having left by the 1959 season). Submitted by S. Stuart 11/21/18.

Uncredited Actors: At Dr. Stuart’s arrest is Burr’s stand-in, Lee Miller. The bailiff who closes the blinds during the showing of a movie in court is none other than Don Anderson. Read more about these frequently unacknowledged players. Submitted by gracenote, 2/17/2011.

Lt. Tragg (Ray Collins) appears only the credits (for the third time this season). Submitted by gracenote, 2/17/2011.

Location: Quick stop by Gulls Way in Malibu before going to Cliffside Resort. Gulls Way is featured in several other episodes. Submitted by Eric Cooper, 28 April 2011.

CARS. (1) Aaron Stuart's medium-color 1963 Buick LeSabre Estate Wagon w/ roof-rack & cornering lamp options. It's probably the same Buick wagon as in ep#s 169 & 173, but following the opening scene of this episode it shall forevermore have a scratched & dented tailgate.

Background Cars. (a) A 1959 Buick 4-Door HardTop (white "Flattop" roof) is parked in the far distance as Car(1) speeds by Car(2) in the opening sequence.

Familiar Names. The name of the blonde owner of Car(2) who witnesses the getaway drive in the opening sequence is not given until Perry refers to her as "Miss Witt" in his examination of Chuck Emmett (42:54). Her full name "Grace Witt" occurs only in the end credits. The name rings a bell: Paul had a perilous encounter with a different "Grace Witt" (a recently grieved widow played by Maxine Stuart) in ep#109 (see photo, top of the ep#109 page)! Samuel Newman is the sole writer credited for ep#109, a key locale of which is "Manzanita Canyon".
You might also recall that we have already been to this Ep#186's "Manzana Valley" in ep#138, which was also written by Samuel Newman. There are no California places with the exact names "Manzanita Canyon" or "Manzana Valley"† so it seems that the names are fictional. In the Real World, however, "Manzana" and "Manzanita" crop up in place names all across the SouthWest U.S. and Mexico. Just one instance is Manzana Creek in the San Rafael Wilderness. The commonness of such place names is not surprising since Manzana [Sp] = "Apple" and Manzanita is an evergreen shrub bearing red berries said to have been favoured by the Grizzly Bear, California's State Animal.
Likewise, ep#180's town of Palmetto, "THE FLOWER CITY", can't be tied to a Real World location. That episode was written by Robert C. Dennis with Samuel Newman as Story Consultant.
Amongst the advantages of recycling these fictitious place names is the possibility of re-using specially made props such as signs and uniform accoutrements: eg, the Sheriff's shoulder badge can be most clearly read as "MANZANA VALLEY SHERIFF" at 23:58 of this ep#186. Considering the pleasant images evoked by "Manzana", "Manzanita" and "Palmetto", I'm left curious about the identity of the model Samuel Newman might have used for "Grace Witt". Added by Gary Woloski, 2/5/14.
†The real Apple Valley, California locale that corresponds so well with the Manzana Valley of ep#138 isn't consistent with the Manzana Valley of this episode #186 since downtown LA is 92 miles from Apple Valley and there's no seaside cliffs out in the desert. GSW

Repeat Characters: As mentioned above episode 138 had scenes in the fictional Manzana Valley. In that story actor Lewis Martin was Judge Libott (name in credits) and actor Kelly Thordsen was Sheriff Ward Vincent. Submitted by H. Mason 2/23/15

Repeat Actors: Lloyd Corrigan and Eddie Firestone were both in this episode and #159 "TCOT Dodging Domino". HamBurger 7/31/2016

This is the only PM appearance for Shelley Ames, who was the daughter of prominent actor Leon Ames...MikeM. 12/16/2016

This is the second of two PM appearances for Stanja Lowe, who was married to actor John Marley...MikeM. 3/24/2017

Perry makes a great point about the law: “Mr. Baxter, I remind you, the law helps the vigilant before those who sleep on their rights.” Submitted by gracenote, 2/17/2011.
+ Vigilantibus Et Non Dormientibus Jura Subveniunt [Latin:] the law assists those that are vigilant with their rights, and not those that sleep thereupon.
++ Ironically, Perry makes the point in seeking dismissal on the grounds that a confession was made without advice of counsel ! (I will confess I didn't particularly care for this episode: I don't know if it was the [greater-than-usual] legal latitude Perry is given, technical implausibilities in the 'home' movie, or just a pathological dislike for Milton Seltzer, but the requisite happy ending would have had me rolling my eyes..if they hadn't been drooping closed already). Notcom, 052119.

Why is this episode titled TCOT "Decadent Dean"? If he is the head of an independent secondary school, as he seems to be, then Aaron Stuart would be a Headmaster or Head of School -- possibly Principal or President. But not Dean. Submitted by HBM1043, 2/19/2014

Tobin Wade is the Decadent Dean, not Aaron Stuart. - Submitted by 10yearoldfan, 9 March 2014.

Location Names: Any relation between Cliffside Resort seen in this story and Cliffside Heights from episode 179 TCOT Skeleton's Closet? Submitted by H. Mason 2/23/15

H.M. Wynant has the distinction of having played victim, murderer, suspect, and prosecutor in various episodes. The whole web of deceit, thefts, and murder could have been prevented by the very simple and logical real estate arrangement described at the end. During that terrific confession, we learn our victim was first struck with a log. Surely there would have been some evidence of that in the wound? DODay 12/22/17