From The Perry Mason TV Show Book (Revised)
Someone entered Phil Schuyler’s bungalow on Halloween and threw an electric heater into the bathtub while the Phil was taking a bath. He never knew what hit him. An eyewitness testifies that only Damion White (played by David Hedison of Voyage to the Bottom of the Sea) went into the bungalow during the time of the murder, but Perry thinks otherwise. After all, weren’t trick-or-treaters coming and going all night long? 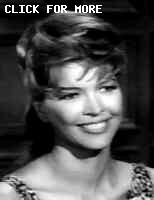 In the summary, it is mentioned that Academy Award winner Ellen Burystn appears in this episode. An even more famous actor also appears here. Robert “Rusty” Stevens makes his only Perry appearance playing a young boy. He was 13 at the time. Rusty Stevens will forever hold a place in all baby-boomers’ hearts as the character Larry Mondello on Leave It To Beaver. All information I have been able to scrape up shows that Mr. Stevens is still alive in the New Jersey-New York area. Submitted by PaulDrake 33, 2 September 2009.

Lloyd Corrigan (Rudy) is also a "famous face"; he appeared in many of the Boston Blackie movies as Arthur Manleder, Blackie's millionaire friend. jfh 15Nov2017.
+ The delightful Corrigan also had a major role in the movie THE THIN MAN GOES HOME, and appeared as sensationalist writer Ned Buntline on 6 episodes (1955-58) of the TV show THE LIFE AND LEGEND OF WYATT EARP. The real-life Buntline may not have really invented a gun called the Buntline Special, but he did invent the character of "Buffalo Bill" Cody for William Cody, transforming him into a Wild West legend and performer rivaling "Wild Bill" Hickok through his writing. Corrigan plays Buntline as deliciously silly and lovable. Oh, and he was Santa Claus in an episode of Lassie! Submitted by JazzBaby, 3/20/2019.

Lt. Arthur Tragg (Ray Collins) does not appear in this episode, despite oncscreen credit. The veteran actor’s health was starting to fail. Submitted by gracep, 1/12/2011.

David Hedison also appeared in the original movie The Fly 1958 as Andre Delambre. He was known as Al Hedison at that time. Submitted by HamBurger 7/7/2016

Character Names: The Old Man listed in the credits introduces himself as 56-year-old Joe Hudson (which is not terribly old). Boy No. 1 is Brucie Hillman; Boy No. 2 is Gene Karger; and the Girl is Michelle Strule. Submitted by gracep, 1/12/2011.

Location: The Royal Pacific Court in this episode plays double duty by appearing again in “TCOT Mischievous Doll.” Also shown briefly in “TCOT Pathetic Patient.” Submitted by Eric Cooper, 28 April 2011.
+ The area that was supposed to be across the street was seen in TCOT Double-Entry Mind. Added by H. Mason 12/22/14

Uncredited Actors: At the party, that might be Bert Stevens playing a party guest. After the murder, Sgt. Brice Lee Miller appears behind Vera Jordan as she walks through the door at the Royal Pacific Court. He reemerges behind Lt. Anderson at the White residence. Submitted by gracenote, 7/23/2011.

The poem recited in the wrap-up scene is from “Sleep and Poetry” written by John Keats and published in 1817. Submitted by gracenote, 7/23/2011.

Perry's knowledge of Keats is pretty good although the exact rendering is "but strength alone though of the Muses born is like a fallen angel". Submitted by Poha1

Goof: When Mona pitches the contents of her drink at Alex (when she accused him of stealing her husbands song) and hitting him in the face and left shoulder, his shirt looks SOAKED (both shoulders), but the “wetness” changes throughout the scene. Some show both shoulders are wet, then only one, and then both wet again, etc. Submitted by mesave31, 03/11/15.

LOCATION: About 22:30 in we see a cop writing a ticket on Pacific Coast Highway. From the numbers visible on the three apartment complexes across the street you can see it's in the 22300 block. The apartments are still there and what looks like shadows on the 2nd story of the middle apartment complex is actually tan tilework. The apartments are just north of the 22333 business complex with Thai Dishes but please note at the moment Google map incorrectly has it in the 22400 block. Submitted by Eric Cooper 6 March 2012.

Of several Background Cars parked around Royal Pacific Court, one is quite notable:

Amanda Randolph: The White's maid appeared as Mama, the mother of Sapphire Stevens, on The Amos 'N Andy Show. That series was pulled from syndication in 1966. It is available on DVD. She also appeared as maid to the Williams family on Make Room For Daddy. Submitted by H. Mason 12/22/14

Repeat Actors: Lloyd Corrigan and Eddie Firestone were both in this episode and #186 "TCOT Decadent Dean". HamBurger 7/31/2016

This is the only PM appearance for Ellen McRae, who would change her last name when she married Neil Burstyn in 1964...MikeM. 11/9/2016

This is the only PM writing credit for Charles Lang, who had an acting career before turning to writing...MikeM. 2/15/2017

No Domino: A domino is a specific shape kind of simple mask that only covers the eyes -- like the one that The Sprit wears. As far as i could see, none of the trick or treaters or party-goers actually wore a domino style mask. Submitted by catyron, 4/23/18.

TCOT Curious Coffee Set: Della serves Paul a cup of coffee from one of the Curious Cups at around 36:58. Submitted by catyron, 4/23/18.

Sorry, but if they had played that ‘Pearls and Jade’ one more time, I would have thrown a shoe at the TV. Enjoyed all the hirsute chests, though. Poor James Forrest - electrocuted in the bath here, just a year before in ‘Meddling Medium’, he died in a plunging elevator. DOD 10/31/19

Perry really takes a risk when he asks a witness to recall the wallpaper pattern of his apartment. Of course, as usual, it turns out in Perry's favor. (What if the witness had answered differently than what Perry was expecting/hoping? He would have strengthened the witness' testimony). This gamble seems like a real stretch, and has been used before to test a witness' memory (turning his back to the witness and asking 'what color tie am I wearing?', etc.). yelocab 22FEB18
+ Perry has other documents in his hands, perhaps other photos for additional inquiries, if needed.

This is one of only a handful of episodes featuring "special days", in this case Hallowe'en. There were no Christmas episodes, one episode with a Memorial Day parade, and one where Perry asks Della whether a telegram he received contains birthday greetings. jfh 31Oct2019