From The Perry Mason TV Show Book
Tim Balfour is a troubled youth who collects speeding tickets the way other people collect stamps. Things aren’t entirely bad for him, especially since his wealthy grandfather has recently written Tim into his will. However, when the boy gets into a struggle with a guy named Chick over some shakedown money, Tim finds himself involved in a murder that only Perry and very few others believe he didn’t commit. 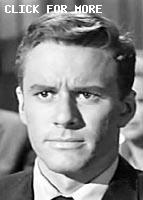 Beneath the businesslike, severe exterior of Miss Adler lies the face of '50s TV housewife and '40s pin-up girl Frances Rafferty! (Also scroll down here.) I momentarily thought that I was seeing a different actress but then realised that Ms. Kulp was otherwise occupied. Added by Gary Woloski, 4/1/14.
+ This is the second of two PM appearances for Frances Rafferty, who appeared as a pinup girl in "Yank" magazine during World War II...MikeM. 3/31/2017

Case of the B surnames In this episode, we have the Balfour surname. There are many episodes this season with surnames beginning with the letter B. Submitted by Perry Baby 9/2/16

This episode along with TCOT Grumbling Grandfather feature both Otto Kruger and Frances Rafferty. HamBurger 8/13/2016

Sightings/Uncredited Actors: That’s likely Bert Stevens walking with a lady in front of Hart’s Liquor Locker in the opening scene. And the terrified proprietor (Hart himself?) may be none other than Distinguished Gentleman #1…sans toupee! As for definite sightings, Don Anderson guards the door to the room where Mason confers with his client. Pencil Mustache Man is in his usual seat in the courtroom gallery, along with “Miss Carmody”, Quiet Old Man #1, and the long-absent Distinguished Lady #3. That’s not to mention a revisit by Distinguished Gentleman #1, this time with his hairpiece. Submitted by gracenote, 2/26/2011.
+Don Anderson guards the courtroom window as a bailiff. The Thin Man makes several appearances at the Balfour Industries Office as he is seen entering the building and later walking down the hallway. He later watches the courtroom activities from Perry's side. Miss Carmody must have had business at Balfour as she is seen leaving the building. Submitted by BigBill767, 6/18/2016.

CARS. In Ep#185 Paul's new 1963 TBird could only be identified as a '63 by the interior upholstery. In this episode there are two '63 TBirds with lots of all-round views including their most distinctive feature, the three sets of hash-marks on each door.

Background Cars. In the multi-car Balfour garage, next to Tim's TBird toward Screen Right is:

At the BALFOUR ENTERPRISES parking lot, 15:48:

The "temporary license" plate on Car(1) seems to be a needless story feature that resulted in a prop/script anomaly. Added by Gary Woloski, 4/4/14.

It's for you, Mr. Mason: This time, it's Paul calling from Perry's office locating Perry at Luke Balfour's house. jfh 29Dec2017

The Drunk: William Benedict was a prolific bit player. He was not one of the original Dead End Kids but appeared in some of their movie and the combination films as one of The Little Tough Guys. He reappeared later with the guys as one of The East Side Kids late in the series playing a member of the gang with his character's name changed in some of the films. He then appeared in the first 24 (of 48) Bowery Boys films as "Whitey". Submitted by H. Mason 3/5/15

This is the first of five PM directing credits for Irving Moore, who would direct 52 episodes of Dallas and 58 episodes of Dynasty...MikeM. 12/23/2016

This is the only PM appearance for John Washbrook who, like RB, was born in Canada. John Washbrook is best known as the 12-year-old son who cared for his beloved horse in the 1955-1956 television series My Friend Flicka, which ran for 39 episodes...MikeM. 4/20/2018

Virginia Christine (housekeeper Edith Summers) is best remembered as the "Folger's Coffee Woman" from a bazillion commercials. I kept waiting for her to offer the Balfours a delightful caffeinated beverage in one those Curious Coffee Cups -- but all she came through with was milk and sandwiches, Submitted by catyron, May 24th, 2018

The character name “Greasy Neal” must be a play on the name of the famous football coach, Alfred Earle “Greasy” Neale. Submitted by Ed Zoerner, 5/11/2009.

The Summary exaggerates a bit. As Mason points out to Luke Balfour, the sum total of young Tim’s police record is two speeding tickets and one charge of reckless driving. Submitted by gracenote, 2/26/2011.

Dollar Bill: Notice the Silver Certificate bill that Luke offered to Tim. This show was made just about the time the government started to issue the Federal Reserve Note in $1 denominations. Submitted by H. Mason 3/11/15 - revised 4/1/15

Unless I missed something, Della has no lines in this episode! What was that opening bit all about? Did Chick and Greasy rob the store? Did they harm the owner? Why was the character of Greasy even introduced - he only appears again as a courtroom spectator. It seems odd that just after blowing up in Mason’s office, Luke Balfour should call Mason to arrange for a detective to follow Tim. DODay 12/29/17
+ The opening gambit served to show the characters of those involved, and to implicate Tim in illegal activity in order to give Chick initial/additional leverage over Tim. jfh 23Jan2020.

"The Case of the Lucky Loser, Episode 2.0." This episode seems to revive plot elements from Episode #41, "The Case of the Lucky Loser." We are introduced again to a dysfunctional family named Balfour that includes a bed-ridden wealthy old man, his young ne'er-do-well relative and potential heir, and the possibility of the latter's involvement in a "hit-and-run accident" that winds up being a hoax. Submitted by BobH, 15 November 2017.

The conclusion is really frustrating. How in the world did Mason come up with all of Edith’s machinations? How did she alienate all those people? How would anyone, especially Mason figure that out? Too many questions are left unanswered. It feels a little phony. Submitted by gracenote, 2/26/2011.

Agree. The basic premise is intriguing, though, and really needed more time to flesh out. DOD 01/23/20