From The Perry Mason TV Show Book
When retired fire chief Carey York is accused by TV reporter Tommy Towne of burning his own warehouse, he contacts Perry, who tells Towne to broadcast a retraction or face a whopping $1.5 million slander suit. Towne eventually goes on the air to admit his first charge was incorrect, sort of….Carey didn’t torch the building to get the insurance, he says; he did it to keep his son from bankruptcy. A sophisticated machine destroyed in the fire would have helped his son’s competition. Carey never gets a chance to file a second suit against Towne-—the reporter is found dead inside a car at the bottom of a cliff. The car belonged to Carey and that lands the ex-chief in jail for murder. 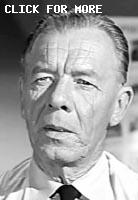 Carey York pays a night time visit to Fire Station 99. Three weeks later, Perry also pays a night time visit to Fire Station 99. In both instances, 3 weeks apart, the exact same automobiles (5 at least), are parked in the exact same places. Submitted by PaulDrake 33, 13 Dec 2014.
+ Not too unusual. They could have been reserved spaces. Also in the 80s I worked at a small business (7 employees) and you could go there days, weeks or months apart and see the same vehicles in the same spaces. Submitted by H. Mason 3/18/15
++ Agreed. I was idly Googling my employer's address on the map application, and even though the scene was a year old, the time the picture was taken showed everyone's cars in the same parking spots, for the most part, as that day! Submitted by MikeReese, 4/9/2016

Russell Thorson makes his final of four appearance on Perry, and his first since 1959. Russell Thorson is best known as a prolific old time radio actor, most notably as Jack Packard on I Love a Mystery. Submitted by PaulDrake 33, 5/13/2009.

Sightings: Quiet Old Man #1 is briefly visible in the courtroom gallery, along with Distinguished Gentleman #1. More here. Submitted by daveb, 1/5/2011. Updated by gracenote, 2/14/2011.

All Fire Vehicles seen in this episode were in-service with LAFD when filmed. The LAFD Historical Archive aided identification immensely. Where specific identification by "Shop Number" is made below, go down the leftmost column of the Apparatus List to find the vehicle (small numbers on lower vehicle doors are the Shop#) . Vehicles, in order of appearance are:

(1), (6), (7), (8) appear only once each. Appearances of the other Make/Types are not necessarily of exactly the exact-same truck (shop#) each time. I find it a bit grim that the water-tanker bush-fire trucks, which were unfamiliar to me 55 years ago, seem to appear every day on 21st Century TV newscasts. Added by Gary Woloski, 3/9/15.
+ Unfortunately, the LAFD Historical Archive (lafire.com) appears to be kaput as of this date. An internet search returned many lafire.com urls but all are returning "Error 404, Not Found". :-( Hopefully, it's just temporary. Kilo, 9/12/2018.
++ lafire.com working again. Kilo 6/13/2019

All the footage of the warehouse fire at the beginning of the episode, other than scenes with episode characters in it, is recycled news footage. OLEF641 7/7/21

Character Names: We finally learn from the bailiff that the name of the judge played by John Gallaudet is Richard Penna. Why this name is omitted from the credits is unknown. Submitted by gracenote, 2/14/2011.
+ In two other episodes, he was Judge Penner. Click on the Actors List in the sidebar, and then click on the letter G. Submitted by gracenote, 8/11/2011.
++ The bailiff introduces him as Benjamin Penner, at 34:46 of the 2012 Paramount DVD. lowercase masonite, 3/29/16.
+++ Maybe the baliff is from New England? OLEF641 7/7/21

Perry quotes from Shakespeare, specifically Hamlet: “The play’s the thing wherein I‘ll catch the conscience of the king.” (The “king” refers to Hamlet’s uncle Claudius, who murdered the Danish prince’s father and married his mother, the widow.) Submitted by gracenote, 2/14/2011.

No Della or Tragg again (despite credit). Miss Street is staying with her aunt, it is explained, but Tragg’s absence merits no mention. Submitted by gracenote, 2/14/2011.
+ On the other hand, Gertie has a rare, nice extended scene with Paul and Perry, including a close-up. Although a receptionist, she is asked to do a secretarial task. Submitted by cgraul, 10/18/2011.
++ AA was Della's 7th absence. "Barbara Hale was one of the original 'Dr. Pepper' girls featured in the soda company's calendars in the 40s/50s," IMDb notes. Mike Bedard 3.18.15
+++ Della's absence and Gertie's extended conversation with Perry and Paul in Perry's office contributed to Towne's ability to barge into Perry's office unannounced. jfh 15Jan2018.

Uncredited Actors: Two show up at the elder York’s arrest: Don Anderson as a fireman and Lee Miller as Sgt. Brice. In the courtroom, Anderson reappears as a courtroom spectator (though he still could be the fireman in civilian clothes), and Robert Wegner stands guard at the door. Submitted by gracenote, 8/11/2011.

Deja Vu: At least three props were recycled from the previous episode, "Frightened Fisherman":
1. The metal, mesh-screened LANG-JAMES LABORATORIES sign now says FIRE STATION 99
2. The radio-phonograph with the raised lid from the beach shack in "Fisherman" is now in Carey York's living room
3. The plank door in Carey's living room with the unusual viewport was also in the "Fisherman" beach shack. Submitted by David H, 10/26/2012.

The ashtray thrown into the TV is rather odd. The image of Tommy Towne is superimposed on the screen. The TV is actually off. We don't actually see the ashtray hit the screen because it goes behind the superimposed image. Fade out the image and there we see the shattered screen. Also, if you look quick, you'll see the little door at the bottom of the TV open then close. Kilo 6/13/2019.

It’s unusual that in this episode they begin the courtroom scene with an American Flag ritual, the entrance of the judge, and other formal procedures not previously aired. Submitted by gracenote, 2/14/2011.

The opening scene of the assault and arson is a wonderful example of television film noir: the close focus on the crowbar, use of high contrasting light and shadows, camera rack-focusing to follow the slow-moving hand, and the choreography of the fall after the manager is hit. Very nice. Submitted by cgraul, 10/18/2011.

Perry sent Gertie on an errand and he left the office. With Della away who was watching the store? Did Perry take lessons on how to run his business from Constant Doyle? Submitted by H. Mason 3/18/15

For some reason, Perry makes all his office entrances and exits through the back door. When he parks his Lincoln outside the warehouse, there is a noticeable dent on the left front fender. DOD 1/15/18

This is one of those episodes where the victim and defendant are both so obnoxious you almost wish the latter was guilty; no Tragg...no Della...a real bummer. Submitted by Notcom, 040516.

Any episode with Elaine Devry is tops in my book. JohnK, 6 April 2016

Identity Crisis? Tommy Towne's vehicle is an automobile, yet on the door in great big all-caps it clearly says: "TV NEWS TRUCK". OLEF641 7/7/21

It rather amazing how quickly Perry uncovers the whole plot point involving a foreign government. Dorian and Paul supposedly come up through the floor of the warehouse to set their trap for the killer. Wouldn't that have made a lot of noise? DOD 1/15/18
Casey York said that Ross Walker confessed to everything except the national debt. The national debt in 1964 was $311 Billion. Otto Gervaert, 2/22/21.