From The Perry Mason TV Show Book
Amy Scott has been paying good money to see a female clairvoyant named Madame Zillia. She’s also been paying Paul to find a drunken young man named Tommy Stiller. Paul can’t believe that a level-headed woman like Amy would believe in a fortune-teller, even one as prominent as Madame Zillia. But Amy has her reasons. First, her name isn’t Amy Scott, it’s Arnell Stiller, and Tommy is her brother. Their father, Leonard Stiller, committed suicide after having suffered through a divorce and bankruptcy. Arnell believes that sittings with Madame Zillia caused her father to make poor business decisions and ultimately led to his death. She’s been tape-recording her sessions with the seer in order to prove the woman a fraud.

After her tape recorder is stolen from her room, Arnell knows that someone is on to her. Then, her landlord is murdered and she’s arrested. The motive is simple. The dead man was secretly Madame Zillia’s partner in her dealings with Leonard Stiller. 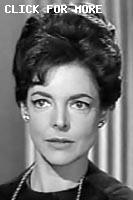 This episode and the next are unusual in that Della does not appear at all! Apparently she is “visiting an aunt.” Submitted by Ed Zoerner, 10/11/2010.
++ GGB was Della's 8th overall & 3rd consecutive absence. Barbara Hale's "photo can be seen at the Dr Pepper Museum in Dublin, Texas (not to be confused with the Waco Dr Pepper Museum)," IMDb observes. Mike Bedard 3.18.15

Sightings: In a booth in the swanky hotel lounge sits Distinguished Gentleman #1, drinking and chatting with a friend. Submitted by gracenote, 3/16/2011.
+ As the preliminary examination reconvenes, we see the above Gentleman seated on the Burger’s side of the courtroom, and there is also Quiet Old Man #1 shuffling to his seat on Mason’s side. Submitted by gracenote, 3/16/2011.
+After court resumes, we find Little Old Lady #1 next to D.G. #1. Submitted by BigBill767, 6/17/2016.

In court, Burger introduces into evidence an envelope which is addressed to Miss Amy Scott, 1416 No. La Brea Ave. (37:30), the real-world address of Paisano Productions / Perry Mason studios when this episode aired. Added by Gary Woloski, 2/19/15.

Business for Perry: Another story where Paul's client needed Perry's help after getting charged with murder. Submitted by H. Mason 3/21/15
+ Actress Sue Randall is probably better known to many of us as Beaver's teacher ["Alice Landers" jfh 16Jan2018] on "Leave it to Beaver". Submitted by BigBill767, 6/17/2016.

Writer Philip Saltzman was born in Mexico to Russian Jewish parents. He would write for and produce numerous shows. He became executive producer of Barnaby Jones...MikeM. 1/10/2017

This is the third of three PM appearances for Merry Anders, who was born Mary Anderson in Chicago in 1934. Her mother moved her to Los Angeles when Merry was 15. She became a teen model, and was given a contract by 20th Century Fox when she was 17. Merry Anders passed in Encino, CA, in 2012 at the age of 78...MikeM. 5/22/2018

Speaking of hats, click on the pic above to see Merry Anders looking heavenly in feathers as court resumes. Lili-beth 02.10.2020

Both Perry and Hamilton address the witness as Madame Zillia instead of her (unknown in the episode) given name, which seems odd since neither holds her fortune-telling in high esteem. I suppose it’s possible that she legally changed her name to Zillia! Submitted by Ed Zoerner, 9/2/2011.

Both Merry Anders and Anthony Eisley would appear several times in another of my favorite shows, Dragnet. Submitted by 65tosspowertrap, 12/9/2013.

We get scenes set in both “fleabag” and “swanky” hotels. And is it possible that only one of that particular tape recorder was sold in all of Los Angeles? DOD 02/23/21
+ According to Lt. Anderson: the model of tape recorder was "sold at only one store in Southern California." The "serial number [shows] that the defendant ... purchased that exact tape recorder." OLEF641 7/8/21
++ Why not just check the registration with the CA DTR (Dept of Tape Recorders)?? 😁 Seriously , tho, viewers might recognize this as being a precursor to what became a staple on Hawaii Five-O, with seemingly everything from typewriters and cameras all the way down to a wad of gum being magically traced to the point-of-sale...perhaps more plausible given the smallness and closed nature of Hawaii, but of course absurd for the amount of information that could be obtained. Notcom, 070821.

One of the best scenes in this episode is when Paul asks the hotel desk clerk if the clerk knows where Joyce Carlton is. The clerk looks directly at him and says, "Oh, I might." After Paul tosses a crisp bill on the desk, the clerk looks down at it and says, "And then again, I might not." Paul then forks over some more cash to complete the deal. Submitted by Dan K, 9/10/17.

When Amy finds her dead canary she lets out a blood curdling scream that can be heard through the neighborhood. Yet when she finds the body of a dead man (Bundy) the best she can do is a muffled "Oh". Submitted by Kilo 12/08/2017.
+ Well, she was attached to the canary . . OLEF641 7/8/21

Madame Zillia wasn't much of a seer if she couldn't see that the young woman was using a fake name! OLEF641 7/8/21

There is a point never cleared up (at least not in the syndication print I viewed). Who put the audiotape in the fireplace for Amy Scott to find? Was it Bundy or Madame Zillia? (I assume Dora had nothing to do with it, although there was a lot of hinting otherwise.) And was Dora telling the truth about her glasses? Queried by gracenote, 3/16/2011.

Good questions, which I for one did not see answered in the episode on the 2012 Paramount DVD. However, at 32:30, in court Madame Zillia tells Hamilton (run the cursor across the hidden text) that Victor said, " I was to tell the girl I would not see her anymore." So, possibly, Dora told Victor about the tape recorder. Also, no further mention about the glasses. Della needs to return, so that Perry can explain everything to her! Submitted by masonite, 12/5/12.

Just watched this again, and no, we do not learn who took the tape reorder, who tried to burn it, nor why that person wouldn’t just destroy the tape rather than the whole machine. And Dora’s part in all this, if any, remains a mystery. Also a mystery - why would a single person in a one bedroom apartment need a maid? DOD 02/23/21

Madame Zillia had to have somebody helping her. Who killed the canary? Submitted by H. Mason 3/21/15

Another two-fer for Perry: he, of course, provoked a confession from the murderer in the case at the bar plus discovered the murder and murderer of a death heretofore ruled a suicide. jfh 16Jan2018.