From The Perry Mason TV Show Book (Revised)
Tryon Laboratories hires the Drake Detective Agency to protect their latest formulas. In spite of Paul’s best efforts, there is a leak in security and some top-secret information is stolen.

One night, Horace Lehigh, an undercover agent working for Dr. Scranton, the head of the company, calls from the lab to say he knows the identity of the spy. Both Scranton and Paul rush to the lab and find Lehigh dead, floating in a vat of water.
+Does whoever writes these summaries actually watch the show? About half the time they are completely inaccurate. In this case, Scranton and Paul do not rush to the lab and find Lehigh dead. Scranton calls Paul and Perry and they arrive sometime later. This is a key element in the plot. Perhaps it is not important that these summaries have much to do with the actual show, but it does seem odd that they are so often wide of the mark. Submitted by Wick 6/18/2022. 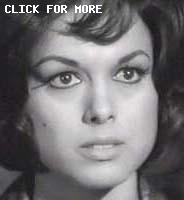 Anomaly: Grant Williams, listed in the trailing credits as Dr. Todd Meade, is identified as Dr. Todd Mead on his laboratory door. Submitted by daveb, 12/21/2007.
+ The closed captions as of today also use the latter spelling. Submitted by gracenote, 5/24/2011.
++ The Tryon Industries Employment Record shows the spelling as "Meade". jfh 01Aug2018.

Alizia Gur (variously spelled Alizia and Aliza), makes her only Perry appearance here playing Dr. Nina Revelli. Ms. Gur was born in Israel and served in the Israeli military. She was also a semi-finalist in the Miss Universe Pageant of 1960, as Miss Israel. Submitted by PaulDrake33, 12 September 2009.
+ Beside Alizia Gur, there was also Ziva Rodann, Show # 142, who was Miss Israel 1957. Submitted by cspoleta 12/17/2015.

Gilbert Green played an SS Major in Star Trek: "Patterns of Force"; the 1968 episode was banned on German Free TV until 2011 due to its Holocaust theme [Memory Alpha website]. Mike Bedard 2.25.15.

Location: Yet again Perry finds a parking spot right in front of the Stanley Mosk Courthouse in Downtown Los Angeles (~32 minutes into the episode). Submitted by Eric Cooper, 25 September 2010.
+....and manages to lose his pocket square en route to the courtroom. DOD 04/21/20

Sightings / Uncredited Actors: Don Anderson appears in the first row of the courtroom gallery, wearing the same dark-rimmed glasses as in episode 252, TCOT Silent Six. And “Miss Carmody” (with a somewhat unflattering hairdo) sits immediately to his right. Submitted by FredK, 20 December 2010.
+ As Paul Drake enters the courtroom and sits behind Perry, we can see the Quiet Old Man #1 seated in the back row of the gallery. Submitted by gracenote, 5/24/2011.
++ Gee, i kinda liked Miss Carmody in Red Floofy Hair.

Continuity Error: In the Tryon dining room, we find Drake, Mason, Scranton, and Rupert using the Curious Coffee Set with matching plates. In a close-up of the detective’s hand, however, the set has magically transformed into a classic pattern china. Submitted by gracenote, 5/24/2011.

Keystone Colleges: Lehigh and Scranton, names of two of this episode's principals, also are names of universities in northeastern Pennsylvania. Maybe one of the writers was homesick. JohnK, 17 November 2015

This is the only PM appearance for Mary Treen, whose career in films and television spanned over fifty years. Her longest-running role was as Hilda on "The Joey Bishop Show"...MikeM. 3/28/2018

In the final scene, at the Shimada Gardens, we can see sushi on a serving platter, which was pretty unusual for the time period. Submitted by catyron, July 31st, 2018
+ At about 35 minutes in, as he is cross-examining Dr. Tachikawa, Perry mentions that the meeting with Rhonda Coleridge took place at the Sashimi Gardens; the final scene is obviously there as well. For those of you not familiar with Japanese cuisine, sashimi is chilled slices of exquisitely fresh fish, served artfully arranged. It is not to be confused with sushi, which is various pieces of bite-sized foods (including, but not exclusively, raw fish) served in conjunction with vinegared rice in rolls, bite-sized pieces (nigiri), and other less well-known forms: sushi literally translates as "sour-tasting". OLEF641 9/17/21

Tryon's $20 million suit against Coleridge Associates would be for nearly $175 million today (2021).
Dr. Tachikawa's "parcel in the Hollywood Hills" cost $70,000, which would be a little over $600,000. Not so out-of-line with today's prices -- for a vacant lot. Houses for sale there today have an average asking price of around $2.25 million.
Tachikawa is the name of an airbase in Japan; my Dad worked there as a civilian tech in the early '50's when it was being operated by the US Armed Forces. OLEF641 9/17/21

Adversaries Perry and Hamilton both used the phrase "CLOAK AND DAGGER" to describe this case of Industrial ESPIONAGE. Paul Drake's professionalism is showcased in his use of anti-bugging techniques. Article 1, Section 8 of the Constitution gives Congress the power to "PROMOTE THE PROGRESS OF SCIENCE AND USEFUL ARTS BY SECURING FOR LIMITED TIMES TO...INVENTORS THE EXCLUSIVE RIGHT TO THEIR RESPECTIVE...DISCOVERIES [Patents]." Mike Bedard 2.25.15.

Paul Drake gets a lot of air time in this episode. It seemed to me he was on camera almost as long as Perry. Submitted by PaulDrake 33. 25 February 2015.
+ Much of Paul's presence is to allow the demonstration of electronic gadgetry - how often have you been fluoroscoped...and on a first date no less ?!?! - but as is endemic on the show, the effort makes little sense (or perhaps I should say the situation makes little sense): what does a person gain by bugging a meeting they are already attending?? Killjoyed by Notcom, 070517.
>> One might be transmitting to others who are not in attendance, or one might be transmitting to a recording device, for example. jfh
++ Exactly what happened in the episode: to transmit technical information to an outside location. Submitted by Wiseguy70005, 1/09/18.

In the Tryon cafeteria, neither the usually chivalrous Perry nor Paul rise from their seats as Dr. Nina Revelli addresses those at the table. jfh 29Mar2018

That meeting sure looks like it is taking place in Perry's apartment, slightly redressed. Tryon Labs uses Della’s filing system - individual drawers for the first twelve letters of the alphabet. DOD 03/28/18

My favorite 'victim finding' scene. The dramatic lighting on those three faces and the eerie bubbling tank - as noir as it gets.

Dr. Scranton looks a lot like Henry Kissinger in this episode. Submitted by HamBurger, 08/08/2020