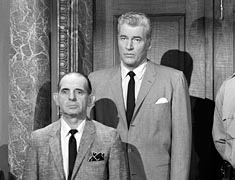 From The Perry Mason TV Show Book
For Herman Albright it’s a case of being in the wrong place at the wrong time, wearing the wrong clothes. Perry is called on to defend a pretty fashion model who’s accused of murdering Herman, a typical would-be masher/ad exec.

Sightings: Today we are introduced to “Sasha Magaloff” the tailor, who is actually quite pivotal. This is the name by which we are tracking him in the “Who Is That?” section of this wiki. Submitted by gracep, 11/10/2010.
+ "Sasha Magaloff" is now known to be the actor Mitchell Rhein. Submitted by catyron, November 16, 2020.
++ In this episode we also see more such regulars outside the courtroom. Distinguished Gentleman #1 holds the door for Tragg and the widow after she identifies the body at the morgue. “Miss Carmody” works as a secretary-receptionist at the Caffrey-Ennicks Advertising Agency and smiles at Perry as she hands him the phone. Both of them leave work in time to sit in the gallery for the hearing — along with Little Old Lady #1 and Quiet Old Man #2. Submitted by gracep, 11/14/2010.
+++ Distinguished Lady #4 is on Burger's side in the back row. Bill767, 1/6/16.
++++ "Distinguished Gentleman #1, who plays a coroner's assistant here, is now known to be the actor Rudoph Salinger. He has twice appeared as characters named "Rudy." In some episodes he wears a toupee; in others he is bald. Submitted by catyron, March 20, 2021.

Barbara Pepper, who plays the nosy neighbor, was an old friend of Lucille Ball from her Ziegfeld Follies days, and so she appeared in small parts and as an extra in many I Love Lucy episodes. She led a hard life and died young, alas. Submitted by gracep, 11/14/2010. + Barbara Pepper was also known as "Doris Ziffel" in both Petticoat Junction and Green Acres. She was also in a Three Stooges short "Three Smart Saps" (1942). - Submitted by HamBurger, 09/20/2014
++ Hmmm, she seems to have been cut from the MeTV version I just watched. Or maybe I missed her. They talked about a neighbor lady witness, but I never saw here. (Green Acres fan here) --yelocab 26FEB19
+++ yelocab, not only is Barbara Pepper missing, several other scenes were deleted or shortened in the MeTV version. The complex chain of circumstances that confused Perry and Paul (all those brunettes!) took up too much of MeTV's advertising time, it seems. Instead of a mystery, all we were left with on MeTV was a simple exposition of events. Invest in the DVD set. You'll be glad you did! catyron, Oct. 14, 2019

Walter, bartender at the Trinidad, was capably played by Frank Jenks. He looked really familiar, although I could not place him from my own knowledge; IMDB tells us, however, that he was in a million minor movies, plus a few large ones such as His Girl Friday and Swing Time, and a lot of early TV, up to his early death in 1962 (not long after this PM appearance). JohnK, 9 October 2015

The Vest: The tattersall vest for which the episode was named appears to be the same one worn by Wilmer Beaslee (Richard Deacon) in Episode #106, “TCOT Red Riding Boots.” Submitted by mohansen, 07/13/2012.
+ Interestingly, the same vest seems to pop up again in Episode #172 “TCOT Surplus Suitor" --worn by the very same actor, Hayden Rorke, who convinced the ill-fated Herman Albright to wear the vest in this episode. Submitted by BobH, 20 August 2017.
++ Also worn by Harry Collins in Episode #179, “TCOT Skeleton's Closet“. jfh 20Sep2017.
+++ And worn again by Sidney Weplo in Episode #192, “TCOT Bouncing Boomerang“. Submitted by BobH, 22 November 2017.
++++ Just watching Ed Wood's Plan 9 From Outer Space (1959) and the vest is worn by Duke Moore as Lt. John Harper. jfh 12Sep2020

After the judge adjourns court for the day, Della, Perry, and Paul discuss matters over some refreshment courtesy of the Curious Coffee Set at his office. During the wrap-up scene, everything is explained whilst everyone enjoys more coffee from the same set at Miss Halley’s apartment. Submitted by gracenote, 7/9/2011.
+ In the same scene is a somewhat out of place large empty mosaic bowl in the middle of the desk. 01/21/2020 Joe B.

Recycled newspaper: The newspaper Joy had at the beauty parlor came from episode 8 TCOT Crimson Kiss. Submitted by H. Mason 11/9/14

Also recycled were "comps" of a couple of magazine covers in the studio, at 5:30 or so on the DVD -- Aitken's Home Magazine, from TCOT Envious Editor. JohnK, 4 January 2016

Go South, Young Lady the bartender's inspection of Miss Lebaron's CDL reveals her to be from Oakland:; this is, I believe, the first mention of the city in the series - and one of very few that will occur - which seems curious given its proximity to San Francisco - which appears frequently - and the fact that it was California's fourth largest city at the time (OTOH Long Beach fares little better, and it's LA's neighbor.) Submitted by Notcom, 101415.
+ Oakland served as a clue that Joy Lebaron was connected to Caffrey's partner, Ennicks, in San Francisco. Submitted by catyron, March 20, 2021.

This is the second of four PM appearances for Myrna Fahey, who appeared in 34 episodes of Father Of The Bride playing the character Katherine "Kay" Banks...MikeM. 12/21/2016

Erik Rhodes was born in the Oklahoma Territory in 1906 and passed in Oklahoma City in 1990 at the age of 84...MikeM. 9/20/2017
+ Mr Rhodes appeared in several Ginger Rogers-Fred Astair movies and, according to Wikipedia, was quite adept at emulating a wide range of linguistic accents. IMHO, Mr Rhodes aged quite well. jfh 20Sep2017.

Brunettes: Annabell, the stalwart hair dresser for the series, had her hands full this time with FOUR brunettes in very similar hairdos -- Grace, Joy, Vicky, and, of course, Della. She did a good job. I wondered if the scene with Joy in the hair salon with her hair in a towel was not, perhaps, a tip of the hat to Annabell's prowess -- or, perhaps, a quick way to shoot a scene without Annabell having to spend an extra hour fixing up yet another flawless brunette coiffure. catyron Oct. 14, 2019

Grace Halley’s contract is an interesting snapshot of 1950s/60s values and expectations. It wasn’t unusual for a married woman to be disqualified from many jobs (sometimes not officially), including schoolteaching. While that is unfair, when we see what happens to people like Britney Spears and Charlie Sheen, maybe at least the “moral turpitude” clauses in contracts should be brought back. Submitted by gracenote, 9/16/2011.
+ Another interesting bit of archaic attitude: Albright just assumes that because he declares his love for Grace she'll instantly reciprocate his feelings. OLEF641 3/11/21

Grace didn't need a lawyer. She seemed to know she was in violation of the contract. Her living arangements and Buddy's comments about being tired of sneaking around showed that. If she wanted to break the contract all she had to do was have Mr. Frye move into the apartment or just inform the company of her status. Submitted by H. Mason 11/9/14

I think that the Grace character wanted to break the contract on her own terms: had the company known of her marriage, she might have been terminated and even accused of 'playing up' to Herman Albright - once one is suspect of deception, then other crimes can be suspected of you. Submitted by MikeReese, 12/11/2015 + like 'subversive activity' ? StreetSense 10/28/2020

We must assume Caffrey arranged to meet Joy at the bar and told her to look for someone wearing that particular vest. Wouldn't Albright's rather naive and completely unsuspecting behaviour have been a tipoff all was not what it seemed? DOD 10/02/18
> And just why was Albright so unsuspecting ?? Didn't Caffrey offer any explanation of what was going on ?? wouldn't he think to ask ?? (Of course we don't see the entire interaction, and his not asking would mesh well with his general gullibility). Really the whole scenario - talk of an "unescorted" female, someone wearing a tattersall vest (or even knowing the term) - is so much of another era it's hard to relate to it...I see a modern remake being along the lines of TCOT Fatal Flip Flops. Notcom, 031221.

Questions: Did Debutante Cosmetics get a new advertising agency? Did they keep Grace as Miss Debutante? Submitted by H. Mason 11/9/14

Ugh. Is 'Ida Albright' about as unpleasant a wife as a woman could get? And is 'Herman Albright' the most naive husband? I wonder, is a spouse (or more specifically, a husband) really responsible for their mates' gambling debts? I would have told 'Ida' that she could box with the Outfit boys (I'm from Chicago, so I KNOW) all she wanted ... wonder how much life insurance 'Ida' had? And as far as 'Herman' is concerned, my mother used to say, "There's no fool like an old fool", about such matters - well, a guy can dream, can't he? Submitted by MikeReese 11/27/14
+ I didn't understand that too. If she was such an unpleasant wife, he should have just handed her to the Casino guys and said "she wrote the bad checks, she's your problem."--yelocab 26FEB19
++ I think the issue is that the company can't afford any more scandal, with one partner already in jail. To protect the company and thereby his career, Albright pays off her debts. Although we do see people paying off gambling debts for spouses, siblings, grown children, etc., in other episodes. Sometimes out of love, a desire to protect the family reputation or to be spared personal shame. Just like having a baby out of wedlock was scandalous to a degree hard to imagine now, I guess gambling debts were, too! Submitted by JazzBaby, 9/8/2019.

This episode seems devoted to revealing the make-believe mindset of advertising people of the time, demonstrating that the best salesmen have to believe their own pitches.
- Albright is a wonderfully delusional character, who just 'knows' the beautiful young Grace would 'of course' instantly give up everything to run off to Mexico with him--and Erik Rhodes is the perfect actor for this part, as anyone who has seen him as the inflated, fantasy-driven Rodolfo Tonetti in "The Gay Divorcee" would recognize.
- Ida Albright seems equally caught up in her own fantasy world (PM has quite a few gambling addicts!), and she seems bizarrely unconcerned about just how the awful mess she has created will end up.
- Ad man Caffrey thinks out loud using goofy football analogies: 'Albright, you’re a very important member of our team here--but no one is irreplaceable...but on the other hand, the quarterback can only throw the passes--got to have somebody else to catch the ball!'
Meanwhile, the 'sane' Grace and her husband have been working this crazy advertising world for some success in violation of her contract, and she withholds HUGE parts of her story from Perry--even though she's been charged with murder--to hide the fact she is married. Submitted by ckbtao 5/25/20

Classic Line when Ida Albright is identifying her husband's body, and Tragg pursues the issue of the namesake vest, she replies "he wouldn't be caught dead in that!" (Given the commonality of the remark, we'll never know if black humour was intended by the writers or not, but the way the scene is played leaves the viewer well aware of irony of the remark.) Submitted by Notcom, 120115.

Once in the main show, and again in the wrap-up, it was mentioned that the police knew that Herman Albright had been "shot by a woman" (and the whole case turned on that). How does a woman shoot? Underhand? Maybe it was the wimpy .25 caliber automatic brought to bear. "You shoot like a girl" sounds like a schoolyard taunt. JohnK, 9 October 2015
> I believe the mention is more along the lines of "there was evidence the person in the car with him was a woman", so presumably she was either seen or left behind something - a scent of perfume, a dropped lipstick - that indicated such...but of course not so revealing as to actually identify her. Notcom, 022720.
++ To quote Paul Drake, citing the "dope" that the police would give him: "All the evidence in the car points to the fact that Albright was killed by a woman." OLEF641 3/11/21