From The Perry Mason TV Show Book
Barry Davis, a college-dropout-turned-drifter, has problems keeping steady employment. Mayoral candidate/junk dealer Mort Lynch, once a friend of Barry’s uncle, feels he owes the kid a favor and gives him a job.

Barry is still negative on meaningful labor, however. He quits his new job but quickly gets another, working as a reporter for a newspaper publisher who has a grudge against Mort Lynch. But when in the course of his reporting Barry learns that his uncle was a crook, he grows despondent. Things get worse when someone crushes Mort’s skull with a monkey wrench, which is found in Barry’s car. 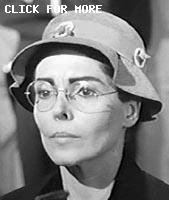 Paul examines a counterfeit 10-dollar bill. Later, Perry looks over the plate used by the counterfeiters. Oops! Maybe not. See here. Submitted by Markus Raab, 3/8/2003.
+ Additional information regarding the the printing plate has come to light! Use the link above to see it. Submitted by Roger Kirk, 1/1/2004, and Charles Richmond, 6/6/2004.
++ Aside from the plate being correctly oriented for offset printing, it looks more appropriate for something like Monopoly money than successfully-passable US currency. However, the ten dollar bill that Paul examines (at 24.09 of the 2012 Paramount DVD) looks like it has the signature of 1963-1966 Treasurer of the United States Kathryn O'Hay Granahan. This is a remarkable feat of counterfeiting, given that Paul later explains (around 41:45), "Seems some duplicate bills to that one Lynch had in his pocket were picked up, during the war, in South America." The 1933-1949 Treasurer was William Alexander Julian (wikipedia list). lowercase masonite, 4/2/16.
Actual US currency is printed by the gravure method, where the images is carved or etched into the plate (rather than the image being raised--as this plate is). Ink is then pressed into the grooves, and during printing, is pressed onto the paper. If you feel the dark, printed areas on a bill you will feel a slight texture of the ink from the printing process. (As opposed to the flat feel of other printed things like books and magazines that use offset printing.) --yelocab 05JUL19

Inconsistencies?: When Paul Drake and Sanford Harper are in the restaurant, Sanford puts money in the jukebox, pushes a button and music starts without the record changer moving. Must have been the same record on the platter perhaps? HamBurger 9/4/2016
+ Anyone know the name of that piece of instrumental music? Submitted by catyron, June 12th, 2018

Location: Much if not all of the beach scenes were shot at Leo Carrillo State Beach in Malibu, CA. The final scene has them parked on the beach access road with PCH (barely visible) running horizontally and Mulholland Highway bisecting it in the background. Submitted by Eric Cooper and Linda Shockley, 23 July 2010. Some pictures here.

Sightings: Davis’s apparent landlord, played by Distinguished Gentleman #1, leads Perry Mason to the young man’s apartment. Later, a bespectacled Gentleman chats with a ladyfriend in a booth in bar. Submitted by gracenote, 3/21/2011.

Although credited, Ray Collins makes no appearance. Submitted by gracenote, 3/21/2011.

Uncredited Actors: It’s a little indistinct in the syndication print, but Don Anderson plays a uniformed officer who speaks to the plainclothesman at the junkyard. A little later he takes a piece of paper from the Police Chief at the scene of the crime. Submitted by gracenote 8/19/2011.

Although familiar to PM fans from his seven episode appearances, Neil Hamilton is most familiar world-wide from his role in the still-syndicated campy Batman series, in which he played Commissioner Gordon. Submitted by cgraul, 11/1/11.

Barry's Car, later referred to as an "old sports car" by a witness in court, is a TRIUMPH TR3 (produced 1955-1962). This lower-price sports car is the right type of car for a '60s Drifting Dropout but it wasn't really that old since its exterior door handles and relatively extensive trim (eg, fender mirrors) identify it as '58 or later (TR2s and early TR3s only had handles on the inside of the doors). Barry's car is what was popularly called a TR3A (1958-on) and might even be the last year's TR3B ('62). See Ep#178 Trivia for the design progression of the Triumph "TR Series" 1953-'76. TR2s and all the TR3s looked somewhat similar and can be misidentified. See this TR Spotter's Guide.

Spotty Sparks: I can't speak for the Triumphs, but a friend of mine had an old MG (although not as old as this one). Its electrical system was awful, and many times he wished for a hand crank. Like whenever it got cloudy. JohnK, 7 December 2017
+ Your friend's car was probably an MGB. MG retained 6Volt electric systems well into the 1970s so his MG probably had a 6V battery. Also, most British car-makers, including Triumph and MG, installed Lucas electrics. One of the most-heard sayings amongst sports car enthusiasts used to be (perhaps unfairly) "Lucas - Prince of Darkness". You should have been telling your friend to "Get home before dark." Gary Woloski, 5/31/18.

This is the only PM appearance for Cynthia Pepper, who had recurring roles on two television series, "Margie" and "My Three Sons"...MikeM. 1/18/2017

MAKEUP artist Irving Pringle must have had to work overtime with his makeup kit but even Miss Standish's hat and glasses on top of Pringle's best effort couldn't disguise the natural beauty of Natalie Norwick. Natalie also made an hilarious appearance in PM ep#28 as elevator-operator Mavis, a "unique, if weird, witness who has a photographic memory and can identify people by their shoes" (episode summary). The formerly sparse "Filmography" at Natalie's IMDb page has recently (2018) been expanded considerably. Added by Gary Woloski 1/4/12, update 5/31/18.

Among their many credits, House Peters, Jr. and Don Haggerty might have appeared together in the same production a few times. In this story they were both policemen. I remember them as adversaries in the classic Republic Pictures serial King of the Rocket Men. Peters was (good guy) Burt Winslow, Publicity Director for Science Associates. Haggerty was (bad guy) Dirken, the main henchman for the mysterious Dr. Vulcan (I. Stanford Jolley - episodes 83 and 111). It is available on DVD and worth watching if you like action. Submitted by H. Mason 4/5/15

The photography and lighting in this episode seem especially crisp. This is especially noticeable in the many closeups. DOD 03/03/21

During this season, there seems to be more of a "60's Look" with the younger guest stars sporting 60's hair styles and more contemporary interiors. Submitted by Perry Baby 10/9/16

Two-fer once again, Perry not only solves the murder of which his current client is charged, but also a murder which was committed twenty years earlier. jfh 05Feb2019.